As companies attempt to appease foodies and health-conscious consumers, they're tweaking their products or inventing entirely new ones

To get an idea of how drastically the image of candy is changing these days all you have to do is ask Jessica Daponte what the latest chocolates for kids are. 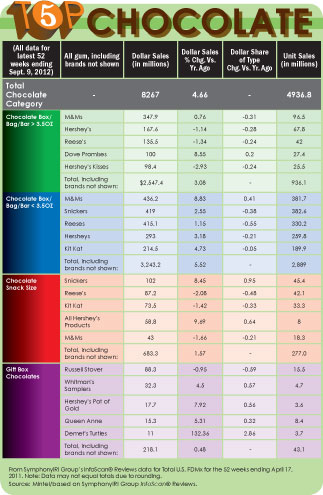 And, when you mention marketing cho-
colates to children, her response is quick.

“We are responsible marketers, and we try to be aware of obesity concerns and respond accordingly, so we shy away from that,” she says.

At its M&M’s website, www.m-ms.com/us visitors are greeted with a prompt similar to those typically found on alcohol or tobacco websites. Above a space to enter your birthday, a message reads “As a responsible manufacturer, we need to check your age to ensure that we adhere to our commitment to market our brands responsibly.”

Since 2007, the company hasn’t purchased advertising time or space if more than a quarter of the audience is likely to be 12 years old or younger, and will not advertise on websites aimed at those under 12

Lucky for adults, the same doesn’t entirely hold true for them. Although that doesn’t mean manufacturers are pushing chocolate rivers or anything either.

As companies continue to seek out ways to sell a product historically seen as unhealthy, finding ways to make it a little more guilt-free seems to be working. During the past year, total chocolate sales in the U.S. are up about 4.6% versus last year, at $8.3 billion dollars.

Probably the most striking example of a “healthier” chocolate this year has been the launch of the Unreal line.

The chocolates are inspired by products already on the market, but they’re all-natural, and have no partially hydrogenated oil, no artificial ingredients, no GMOs, no preservatives, and a low glycemic index.

And of course, they contain 25% less sugar, 50% more protein and 100% more fiber than the leading conventional candy bar. Moreover, Justin’s uses only all-natural and organic ingredients, has no hydrogenated oils, no high-fructose corn syrup, no preservatives, no trans fats and is also gluten-free.

Such a drastically different product though isn’t the only way marketers are trying to appease consumers worried about obesity.

Mars, too, got in on the action this year, with the announcement that all if its candy bars will have 250 calories or less by 2013.

However, that doesn’t mean the company no longer sells candy in what is traditionally known as the “king size” format. Rather, Mars is selling them by other names.

“For former larger bars, we now have multi-piece formats to enable sharing or saving a piece for later, and label them with ‘2toGo’, ‘4toGo’ and ‘Tear ‘n Share,’” the company explains. “These formats generally represent more than a single portion and are labeled as such.”

“Shoppers are looking for options with their chocolate. They want portability, portion control and sharing size packages,” he explains. “Each package has two or four pieces, wrapped in a re-sealable twist-wrap package.”

It’s not all about calorie counts though. Daponte says that as foodie culture becomes more prevalent, consumers want candy that tastes incredible.

And the big taste this year has been a continuing trend involving sweet and savory.

On the other side of the spectrum was the Chuao Maple Bacon Bar, featuring crisp bacon bathed in maple sweetness and bonfire-smoked sea salt combined with a rich milk chocolate.

“You’re also going to see crunch, the idea of mouth excitement, having something you can sink your teeth into,” Daponte says. “Peppers, cayenne pepper, bacon, there’s so many things you can add to chocolate.”

At the end of the day though, no matter how many calories a chocolate has, or even how much bacon it’s covering, none of it will sell if consumers aren’t invested in the product. That’s why Daponte says it’s so important for marketers to tell their story.

“There’s a lot of competition in the candy aisle,” Daponte says. “Brands that work at establishing that strong connection [will succeed].”