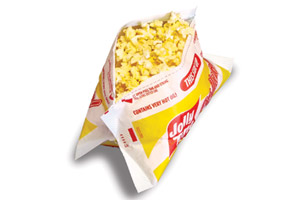 For many Americans, summer doesn’t officially begin until a carnival makes its annual stop in their town, bringing with it a week of fun for folks of all ages—from face painting and pony rides for the kids, to lightening-fast rides for thrill-seeking teens and bingo for seniors. Then, of course, there’s the food. Edibles ranging from standard carnival fare to ethnic specialties allow carnival-goers to enjoy old favorites and sample new treats.

Similarly, recent ready-to-eat and microwavable popcorn introductions offer something for everyone, too: Savory flavors for popcorn aficionados; better-for-you ingredients for health-conscious shoppers; and convenience for busy consumers.

In June, Rudolph Foods unveiled a popcorn addition to its Southern Recipe brand—Cheesy Cajun Popcorn. “In the South, we love pimento cheese, and we also like Cajun seasoning,” says Mark Singleton, vice president of sales and marketing.

Rudolph Foods settled on the spicy flavor after focus groups selected it over numerous cheese choices. “It’s got the right amount of cheese and has a good Cajun kick to it,” Singleton notes.

Slated to launch in convenience stores in August, Southern Recipe Cheesy Cajun Popcorn will be available in 2-oz. bags at a suggested retail price of 99 cents.
Consumers with food or dietary issues can indulge in some flavorful snacking as well, thanks to Kernel Fabyan’s Gourmet Popcorn. The St. Charles, Ill.-based company recently unveiled a healthy version of three of its retail popcorn products—Kernel’s Caramel, Golden Cheddar and Classic Mix, which is a blend of caramel and golden cheddar known as Chicago-style popcorn.

“Based on the research we’ve done, a lot of retail-based consumers now are very knowledgeable about [food] labels, healthy food and snacks,” says Rich Balance, chairman and CEO. “We thought that adding zero trans-fat, all-natural, gluten-free products would be nice for those consumers.”

The new products are available at select grocery stores and upscale retail outlets. An attractive, resealable retail bag with high-resolution photography touts their all-natural ingredients and lack of trans-fat and gluten.

Meanwhile, Kernel Fabyan’s Original recipe popcorn will continue to be available to whoever wants it, according to Balance, and at Kernel Fabyan’s Gourmet Popcorn Shoppes in Geneva, Ill.; Naperville, Ill.; Deer Park, Ill.; and downtown Chicago (at presstime, the latter location hasn’t opened yet).

Versions of Kernel’s Golden Cheddar, Classic Mix and Caramel come in 4-, 7- and 9-oz. bags, respectively, with a suggested retail price of $5.79-$5.99.
“We are bringing to retail our concept of high-end, made-fresh-daily, gourmet products that have evolved from our stores over the years,” says Balance. “That’s the theme that we’re trying to convey.”

Another Illinois popcorn maker, Holly’s Gourmet Popcorn in Mokena, began shipping single-serve, 99-cent bags of its Caramel, Chicago Style and Cheezy popcorns to convenience and grocery store partners in January. “We saw the need for a high-quality popcorn at that price level, especially with the way the economy is going,” says president Steve Hamilton. The company also sells a variety of basic popcorn flavors, chocolate-drizzled popcorns and specialty varieties in multi-serve bags and tins. All are made with quality ingredients, such as real butter, brown sugar and real Wisconsin cheddar cheese.

The single-serve bag holds 2 oz. of Cheezy cheese popcorn, the company’s most popular flavor, and 2.25 oz. of the Caramel and Chicago Style varieties. The company plans to roll out four additional offerings (Butter, Kettlecorn, Caramel Nut and Spicy Cheese) in single-serve bags in August.

Like many carnival foods, which are generously portioned and served in containers that encourage sharing, Jolly Time Homemade Pop Corn also offers consumers a convenient, new way to make and share the tasty, popped kernels—the Insta-Bowl bag, which is a popping bag that turns into a bowl with the pull of a string. “That’s really the first innovation in the category for many, many years,” notes Elsen. “It’s all been unique flavor profiles—that’s where the innovation has been focused. But now, here’s something that’s pretty unique in terms of the product and the preparation itself. It’s going to create a lot of interest and excitement.”
Jolly Time Homemade Pop Corn began appearing on store shelves in October 2010 and is now “probably in a third of the supermarkets,” says Elsen. “We’re still in the introductory stages.” A box contains three 3-oz. bags that offer 2.5 servings of popcorn each, and sells for $2.39-$2.89. |

Kernel Season’s, one of the country’s top brands of popcorn seasonings, is being expanded to include a new line of all-natural, ready-to-eat popcorn, giving consumers a chance to enjoy seasoned popcorn on-the-go.

The line focuses on all-natural ingredients such as whole grains, natural sunflower oil, real cheese and clarified butter for “better-for-you” snacking, according to the Elk Grove Village, Ill.-based company by the same name. The popcorn also contains 0 g. of trans-fat per serving and no artificial colors or flavors. The 5-oz. bags come in Real Butter, Aged White Cheddar, Zesty Chipotle Nacho and Sweet ’n Salty Kettle Corn varieties and are available nationally in retail locations for a suggested retail price of $2.79-$3.79.

As with most good things, carnivals leave town before many people are ready to see them go, taking their funnel cakes, cotton candy and fresh, buttered popcorn with them. Thankfully, snack retailers can step in and satiate consumers’ cravings for flavorful, easy-to-eat snacks by adding some new popcorn creations to their lineup, offerings consumers a bit of fun and flair year-round.

Editor’s Note: To learn more about these and other new popcorn products, go to www.snackandbakery.com and check out our online new products section.