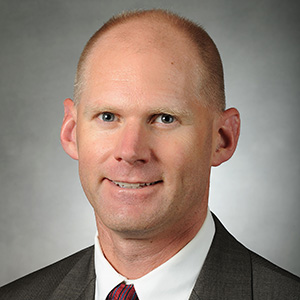 Kirk Vashaw was born in 1972 in Maryland to Kathleen Spangler, the daughter of Ernestine and Harlan (Bun) Spangler and a graduate from Bryan High School in 1950.

In 1994, Vashaw received a bachelor’s of science with distinction degree from the College of Engineering at Cornell University in Ithaca, N.Y. He began his career in New England as a project engineer at Gilbane Building Co., one of the largest family-owned construction management companies in the United States. At Gilbane, he worked on-site on a variety of different projects including several hospitals, schools, and office buildings.

From 1999-2001, Vashaw attended the Ross School of Business at the University of Michigan where he received his MBA with high distinction with a concentration in marketing.

In 2001, he moved to Boston to work in the Gillette Co.’s marketing department as a brand manager. There Vashaw worked on licensed products. In 2003, Spangler Candy Co. signed a licensing deal with Disney and he was recruited to the company to manage that business.

In 2008, Vashaw became the 7th president in Spangler Candy Co.’s 111-year history and the first fourth-generation family member to lead the company. The company employs 500 employees in its Bryan, Ohio plant and produces more than 12 million Dum-Dums lollipops and three million candy canes every day. In its 500,000 sq.-ft., state-of-the-art manufacturing facility in Bryan, some of America’s most well-known confections are made, including Dum-Dums, Saf-T-Pops, Circus Peanuts, Spangler Candy Canes and more. In 2018, He led Spangler’s acquisition of NECCO, which had then fallen into bankruptcy. Through his leadership the entire company was acquired and Spangler retained the NECCO Wafer, Sweetheart andMary Jane brands. They have since merged those manufacturing operations into their own plant, expanded their plant and successfully relaunched the brands. The remaining NECCO assets were sold at auction.

A long-time involved member of the National Confectioners Association, Vashaw was honored with the inaugural NCA “Member Advocate of the Year” award during Washington Forum 2012 for his efforts in persuading members of Congress and other representatives from Ohio to reform the U.S. sugar policy. He was elected NCA’s Chairman of the Board of Trustees in 2019. He remains a member of the NCA Board of Trustees today and continues to actively lobby for sugar reform.

Vashaw’s community interests include being a member of the Bryan Area Foundation and the Williams County Airport Authority. In addition, he has worked in the past for the Fountain City Festival and Junior Achievement.

He obtained his pilot’s license when he was 16 years old, and flies regularly for both business and pleasure. He also enjoys snow skiing, sailing, and running marathons. Vashaw met his wife Sarah in Boston in 2002 and they have three children ages 12, 17, and 18.