Toffee maker is second candy company acquired by BBX within a week. 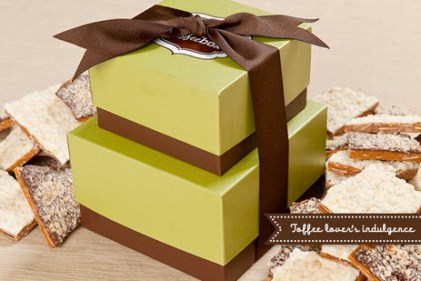 For the second time this month, BBX Sweet Holdings has announced it is acquiring a confectionery company.

The Toffee Box, headquartered in Carlsbad near San Diego, Calif., is known for its award-winning handcrafted toffee, which is made with all-natural ingredients and no added preservatives.

“We are extremely pleased to announce our most recent acquisition of The Toffee Box,” says Jarett Levan, BBX Capital president. “The Toffee Box, which started making toffee from a secret family recipe, has become a premier toffee confections company and we are excited about the opportunity for growth in new products, distribution channels and geographies.”

The Toffee Box has been featured on the Martha Stewart Show and the Rachael Ray Show.

“I am delighted for The Toffee Box to be part of the BBX Sweet Holdings family and excited about the resources and experience BBX Capital will provide to help build the brand,” says Heather Mubarak, founder of The Toffee Box.

As for Anastasia Confections, its Founder and President Mike Constantine, says he’s excited about the future with BBX Capital.

“What started as a small kitchen operation has now grown into one of Florida’s largest and most distinguished chocolate and specialty candy manufacturers, and we are excited to grow the company,” he says.

Anastasia Confections has been making and selling candy as a family business since 1984 in Florida, catering specifically to tourists. It specializes in coconut candy, jelly candy, saltwater taffy and chocolates, including the popular Coconut Patties, Coco Rhumbies and Choc-O-Gators. Packaging usually features Florida motifs such as a map of the state, palm trees or alligators, and its products are easily found in areas frequented by tourists.

“The success and recognition of Anastasia Confections products in Florida paved the way to its expansion and branding on a national level,” says BBX Capital President Jarett Levan. “We are very pleased to welcome Anastasia Confections to our growing suite of premier confection companies at BBX Sweet Holdings.”