Sharapova, Virtual Reality and Snapchat: My 3 favorite moments from the Expo!

Sweets and Snacks Expo is just as crazy, and just as sweet, as ever.

I just got done covering my fifth Sweets and Snacks Expo in Chicago. It’s not quite the sugar high it was the first time, but it’s still the kind of show that reminds me why I love the industry so much.

It’s hard, even after half a decade, to not get a little giddy when you walk into a huge room filled with giant M&M’S, piles of candy samples and the sweet smell of chocolate in the air.

Amidst all the craziness there were three highlights of the show that really stood out. I met Maria Sharapova, experienced my first go at Virtual Reality, and really found the Snapchat sweet spot for the show. 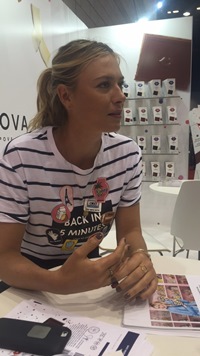 I have to confess I had been looking forward to meeting Maria Sharapova for months. I had heard a rumor that she was going to be at the show, and was hoping I would get the chance to see how tall she actually is in person. Spoiler alert, she’s really tall.

She chatted with me and Candy Industry Magazine’s Editor-in-Chief Bernie Pacyniak about how she was incredibly involved in the whole process, from the stunning packaging to her inspired flavors, like dark chocolate and coconut as well as milk chocolate and strawberry.

And then she broke chocolate with us, so to speak, and let us try her new line. I have to say the dark chocolate and coconut was delicious, and the real coconut shreds add an unusual texture that really brings out the chocolate.

We’ll have full coverage of our meeting with her in the July issue, so be sure to check that out. 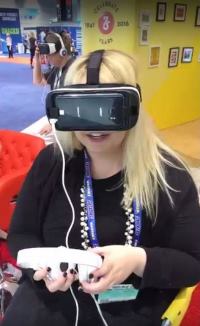 I’m pretty sure that I will someday look back at this column and laugh at how I used to think Virtual Reality was a novel idea — probably around the time when everyone just lives in pods and experiences life through computers and monitors permanently stitched to their eyes.

But that day is not today, and thus l was really excited to try being engulfed in another world for awhile.

Mars was promoting its M&M’S brand through a virtual reality experience at the show, with a demonstration right outside the entrance. I couldn’t resist putting on the glasses as the man at the display explained that I should not try to stand up while wearing them, lest I fall over and, knowing my luck, die.

I’m just going to geek out here for second and say, IT WAS REALLY COOL! Basically, you felt like you were in the various homes of the M&M’S Characters, and then you could unlock different doors and walk into new rooms by focusing your eyes on little M&M’S. (You can check out an online version of the video on the M&M’S Facebook page). 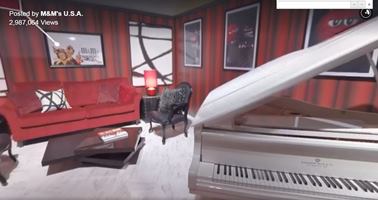 It was a 360-degree experience, and I totally looked like a dork while I was wearing the glasses, but it was so awesome that I didn’t really care. Plus, you know, it worked — immediately afterward I was craving some M&M’S. 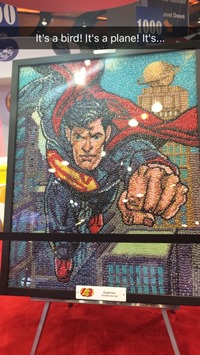 For all of you who haven’t heeded my pleas to follow us on SnapChat (@CandyIndustry), I’m sorry to tell you that you missed some awesome posts last week while we were at the show.

It was a great chance for us to really hone our Snapchat story telling skills. With some help from our contributor Abi Watt, we were able to capture some really cool moments. Like Mars’ Tim Quinn picking his favorite flavor from the new Peanut M&M’S, (he went with Chili Nut because, “There’s nothing like a little spice in your life!”), and the new Juicy Drop Gum prototype! And of course, we also got a shot of the Superman portrait made entirely of Jelly Belly jelly beans.

If you missed it though, don’t worry. We’re planning to put some of our favorite moments together into a small video about the show, so stay tuned for that.

Overall, the show was wonderfully sweet, and just crazy enough to leave me exhausted the entire Memorial Day Weekend. And I wouldn’t have it any other way.