Couture Pops and Kardashians: Worth it or not? 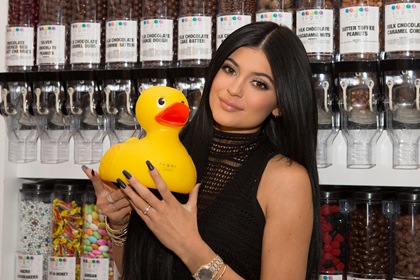 The guy with the longish blond hair wearing the gray suit and holding a clipboard looks like he belongs in a boy band straight out of the '90s. He glances at us and waves us past.

“Yeah, there are no media passes, so you can just roam around for a while if you want,” he says.

Crystal Lindell, Candy Industry Magazine’s managing editor, and I briefly look back over our shoulders at the line outside snaking around the corner, full of fans waiting eagerly for their chance to see a celebrity up close. How many of them are there – hundreds? A thousand? And here we are, strolling in without so much as a credential check. I almost feel bad.

This is the grand opening of Sugar Factory in Rosemont, Chicago. Although the store has been open since November last year, they’re making it official now with a red carpet and celebrity appearances by Blackhawks Hall-of-Famer Bobby Hull, America’s Got Talent host Nick Cannon and — most importantly — Keeping Up With the Kardashians star Kylie Jenner.

That’s what those hundreds (Sugar Factory says thousands) of fans are waiting for — 17-year-old Jenner, whose claim to fame involves an astute sense of fashion and a half-sister relationship with the older Kardashians.

She’s here today to promote the line of Couture Pops she designed with her sister Kendall, lollipops that go for $26 apiece and come in “Black Diamond” and “Gray Sparkle.” The oomph, of course, comes from the stick, which is encrusted with little jewels and sparkles like only a Kardashian lolly can.

All of this I learn during a quick tour of the store. The entrance is a candy shop, decked out in white and stocked with several dozen flavors of Jelly Belly jelly beans, indistinctly wonderful-smelling gummies, 5-lb. gummy bears and, of course, Couture Pops. The restaurant inside is darker, mostly black and gray and going, I assume, for a trendy chic. There are mirrors everywhere. The walls are lined with photos of various celebrities having the time of their lives at Sugar Factory. Kim Kardashian herself smiles demurely down at visitors at the entrance, while Nicki Minaj beams at the crowd, holding her very own blinged out Couture Pop.

Before I can decide if that’s a good thing, Crystal and I relocate and stake out a spot out on the red carpet to wait for Jenner’s appearance. Behind us, leaning against a shaky-looking gray fence, are the fans. They all look like teenagers, mostly girls, bundled up in big coats and thin blankets.

“We’ve been here since 4:30 in the morning,” one of them says (the earliest groups came at 3 a.m.). They all skipped school to stand in line, except one friend who went for a math exam, then promptly booked it to join them. They ask us to put in a good word for them when Jenner shows up. They’ve been standing out in the cold for 12 hours, after all.

At 4:45 p.m., about 15 minutes before Jenner is supposed to arrive, Bobby Hull appears. The media is much more invested than the fans, which makes sense because at 76, Hull is probably five times older than the average kid in line.

Hull is unfazed by the crowd’s lack of reaction. He spends a few minutes chatting with the media, addressing everyone with, “Everybody happy?” in a low, smiley growl, which is the friendliest thing anyone will say to us tonight, before moving on to engage the fans lined up against the fence. There, he’s peppered with questions about Jenner – when she’ll show up, whether they’ll get to see her – and none about his Blackhawks glory days.

By now, it’s 5 p.m., and there’s no sign of Jenner. I can’t help but notice how dedicated her fans are. Not only have they been waiting for roughly forever now, but when rumors of plastic surgery arise, they promptly squash them. “She can’t have,” someone says. “She’s a style inspiration!”

Their dedication, though, worries me. There are hundreds of people in line. There’s a girl behind me who looks like she has hypothermia, and another loudly proclaims that her toes are numb. But the red carpet only stretches to the first 50 or so fans. Is she going to see them all, or are most of these kids just going to go home disappointed, telling stories about that one time they almost saw Kylie Jenner at Sugar Factory?

Then it’s 5:23 p.m., and all of a sudden, the crowd starts to scream. The media looks around, confused, because nobody is on the carpet. Somewhere, I hear someone yell, “KANYE!”

Just when the noise starts to die down, Jenner materializes through a glass door and pandemonium ensues. The fans erupt into shrieks, so powerful and so shrill they drown out all inner thought, and all I can do as Jenner struts down the carpet is jot down in my notebook, “Wow. Can’t hear self think.”

The audio assault continues as Jenner pauses in front of the cameras to pose, holding one of her Couture Pops and eyeing the cameras with a mysteriously sultry, close-lipped smile. Every time she so much as takes a step, her fans ramp up the screams. Once in a while, chants of “Kylie! Kylie! Kylie!” emerge through the indistinct wave of sound.

The throng is almost more fascinating than Jenner herself. About 50 teenagers crowd against the fence, stretching desperately to get shots of the young celebrity on their phones. The ones in the front row are crushed against the metal barrier, which looks about as safe as it does comfortable. One kid waves a poster asking, “How many RT’s for Prom?”

Jenner waves at her fans. Their reaction once again crushes my eardrums. And then, Couture Pops and other assorted Sugar Factory candies go flying through the air as Jenner’s people chuck them into the crowd. Hands reach out, flailing and grasping for sweets.

Their patience is somewhat rewarded when the object of their adoration walks around to the fence. People reach out and stroke her shimmering hair as she passes. She pauses to take some selfies with her fans, much to their delight, and then, after a grand total of 11 minutes out on the red carpet, she disappears into the restaurant.

Inside, Jenner samples some of Sugar Factory’s most extravagant offerings, including the King Kong Sundae, served with a mound of ice cream bigger than her head and mounted with two waffles cones and three sparklers shooting mini fireworks.

Outside, her fans clamor for the chance to catch one more glimpse of her. Despite police presence, two groups hop the little metal fence. They pile into the foyer, craning their necks to look for Jenner before they’re kicked out by Rosemont police.

“Can you just tell us if she’s going to come back outside?” One girl pleads, to which an officer shrugs and says, “Probably not.”

The girl turns to me and Crystal and demands, “So why are you allowed to be here?” That’s fair. We’re not carrying fancy cameras to distinguish us as media and look like we might be part of the crowd — except for the fact that neither of us is 16.

At some point, Jenner reappears and leads the press to the Couture Pops shelf. One of her people grabs a lollipop for her to pose with. He tosses the empty box onto the chair beside me, pauses, and then, as an afterthought says, “You can keep the box.”

“Oh. Thank you,” I reply, underwhelmed by his evidently boundless generosity. He shoots me a look, as if he’s not quite sure whether to believe me, but before he can decide, it’s time to whisk Jenner off again.

After that, the music with the thumping bass returns. I assume this means Jenner’s gone. A quick time check reveals that it’s 6:10 p.m., which means she spent 45 minutes making an appearance and got paid about $100,000 for it (estimate based on a quick Google search and information from Speakerpedia).

Is it worth it?

For me, with no personal investment in the event or in the celebrity, it’s yes and no. The entire thing is an experience, to say the least, and an eye-opener in that I had never realized before how influential celebrities can really be. It’s not something I’ll forget anytime soon, but I also don’t know how this experience, so vividly burned into my memory, benefits me.

For Sugar Factory, it’s definitely worth it. The extra coverage from the event, the endless line of fans hanging outside the door, the resulting sense of exclusivity, all of that can only benefit the store. And Jenner’s spot-on promotion of her Couture Pops will only make people want them more than ever.

But for the fans, the kids who spent 13 hours waiting in the cold to see her for 11 minutes? I’m not sure. Most of them will go home disappointed. There’s a girl in the bathroom complaining bitterly to her mother over the phone, explaining that she didn’t even get to see Jenner.

And even the ones who did can’t possibly be satisfied by the brief glimpses they caught of her. She didn’t get to really engage them, aside from the one or two selfies she took. Her crew was so busy trying to hustle her on to the next thing that she only got to interact with a handful of her fans.

Many of these kids will probably realize that events like these, which aren’t actually meet-and-greets, are more trouble than they’re worth. Maybe next time they’ll even choose to stay in school instead.

But at least, like me, they’ll go home with a story to tell. And at least some of them got to try the candy, which is more than I can say for myself.