The natural and organic segment is growing as consumers continue to indulge in sweets, but become more aware of the ingredients used.

Are treats and a healthy diet mutually exclusive? That’s a question people have always wondered, and it seems consumers are starting to believe that they aren’t.

According to the Hartman Group’s Health and Wellness 2015 report, consumers believe that denying themselves treats can lead to increased desire and a loss of control. They think it’s healthier to enjoy treats in moderation rather than risk overdoing it later by trying to cut sweets out cold turkey.

But while they won’t deny themselves the occasional treat, they’re still mindful about the kinds of food they’re choosing to satisfy cravings. With growing awareness and demand for simple ingredients, consumers want natural and organic foods—even as snacks.

The Health and Wellness 2015 report shows a big leap in the number of consumers who say they avoid refined sugar and artificial sweeteners, opting instead for treats flavored with brown sugar, maple sugar, honey and fruit sugar. Meanwhile, healthy and natural fats are slowly returning to favor, which is good news for chocolate makers and lovers. The report also shows consumers are trying to avoid artificial colors, flavors and preservatives.

All of these trends have created a fertile market for natural and organic candy products.

While small manufacturers have long answered the needs of niche consumers with organic candy, the demand is becoming more mainstream as more sophisticated natural and organic candy products are entering the market and attracting a wider range of consumers.

Just look at the “clean” versions of classic candies that have been popping up. Justin’s Organic Peanut Butter Cups, for one, and TruJoy Sweets’ Organic Original Fruit Chews, which resemble Starbursts.

Natural and organic food is certainly a growing segment, and not just in candy.

The 2015 Natural Products Expo East show featured more than 1,300 exhibitors and saw a debut of more than 400 new brands using the show as a launch pad into the marketplace. The show is expanding rapidly, which shows how much the food industry is responding to consumer demand for more natural and organic products. 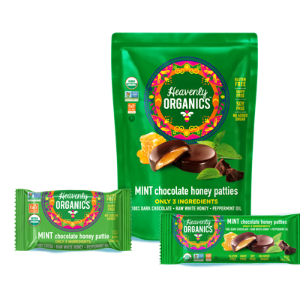 On the candy side, Heavenly Organics won the Natural Products Business School Pitch-Slam competition for its sustainably harvested honey and support of local farmers.

It’s primarily a honey maker, but Heavenly Organics also manufactures delightful chocolate honey patties that melt in your mouth. The chocolate shell is filled with the raw honey the company is known for, sourced from naturally occurring wild beehives found in the forests of Northern and Central India, as well as parts of the Himalayan Mountains. The company prides itself on using honey from free-range bees that have never been exposed to pesticides, pollutants, genetically modified crops, or antibiotics.

Not only is Heavenly Organics’ honey natural and organic, but honey itself, in its raw form, is high in live enzyme content, pollen count, vitamins, and minerals. And the sheer number of honey varietals makes it an incredible ingredient to use in candy.

“In the United States alone, there are more than 300 varieties of honey, all with unique flavor profiles, derived from floral sources such as alfalfa, wildflower, buckwheat and tupelo,” says Catherine Barry, director of marketing, National Honey Board. “This flavor variety gives confectioners the ability to use honey to formulate candies with very specific flavor profiles.”

For more delicate candies, confectioners can use clover or orange blossom honey, and for richer and more indulgent treats, they can use darker honey like buckwheat. And many confectioners are turning to honey to provide sweetness, clean labels and marketing benefits to their candies.

“The marketability of honey is a significant tool for confectioners to consider when promoting a product made with honey,” says Barry. “Popular honey iconography, such as honeycomb, bees and the honey dipper are used across the food and beverage industry as key marketing benefits.”

The trickiest part is substitution, she says. If a confectioner is using a dry sweetener, there is a reformulation necessary to switch to a liquid sweetener like honey.

But it’s not just honey that’s growing. All sorts of organic confections are expanding, from gummies to chews to hard candies. 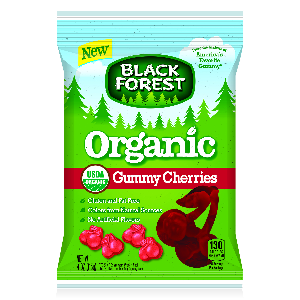 After the success of Ferrara Candy Co.’s Black Forest Organic gummies in 2015, the company is expanding its line of USDA-certified organic candies to include Fruity Chews, Sour Heads, Candy Drops and Caramel Hard Candies.

Ferrara has invested more than $25 million to develop a complete organic infrastructure that will produce highquality, delicious organic confections the company can offer at a reasonable price compared to the non-organic versions. And the investment is expected to help the company reach its goal of doubling sales to $2 billion by 2020. The launch of the new Black Forest Organic candies will also be accompanied by a $10-million campaign, with digital and social marketing components.

In other words, Ferrara is ready to keep expanding its organic lines and ready to see the benefits that come as a result. And it’s not alone.

Unreal’s foray into seasonal candy goes to show the growing appeal of natural and organic sweets. Especially now, with consumers becoming more and more interested in “unjunked” food, companies like this one seem poised to make a splash.