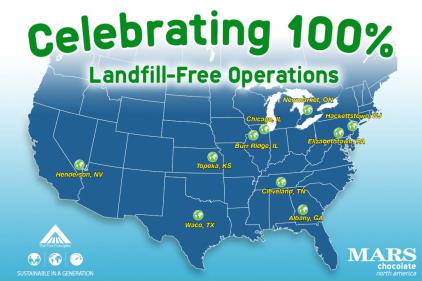 Mars Chocolate North America has reached one of its major environmental goals.

The chocolate maker has announced that all 10 of its manufacturing facilities are now certified landfill-free, achieving its 2015 zero-waste-to-landfill goal. The company’s Henderson, Nev. site was the final facility to achieve the certification.

“At Mars we are constantly focused on bettering the local communities in which we operate,” says Mike Wittman, v.p., supply chain, Mars Chocolate North America. “We are proud to have earned zero-waste-to-landfill certification, another important achievement in driving sustainability across all of our facilities and continuing to sweeten the world in which we live and work.”

Mars established its waste target in 2007. Since then, it has reduced waste emissions by 4,500 metric tons, which is enough to fill 35 football fields 12-in. deep, annually.

To do so, the company focused on three key areas:

Becoming landfill-free was one of several global goals for 2015 outlined in the Mars Principles in Action Summary.

Published on Mars’ website, the annual report details the company’s approach to business and its commitment to put the Mars Five Principles (quality, responsibility, mutuality, efficiency and freedom) into action.

One of those commitments includes a target to eliminate all fossil fuel energy use and greenhouse gas emissions from Mars’s direct operations by 2040. Since 2011, the company has aimed to achieve LEED Gold certification for all major new buildings, succeeding with 10 buildings to date.

In May, Mars announced the creation of a 200-megawatt wind farm meant to generate enough electricity to cover 100 percent of the power used for U.S. operations, including 70 different sites.

Next, Mars has plans to partner with warehouses and regional distribution centers to adopt other waste reduction policies.