Diversification has been key to success for Anthony-Thomas Candy Co. over the last 70 years.

Though the company could be more specialized, third-generation owner and president Joe Zanetos says diversification is what has made the business thrive through the trials of the last seven decades.

“It’s helped when one facet was down and another was up,” Zanetos says.

Case in point, when COVID-19 hit in early 2020 and schools closed, the company’s fundraising business suffered, but co-manufacturing and retail – specifically ecommerce –increased.

“We had shorter (retail) hours, less people working and made more money,” Zanetos says, noting as grocery sales picked up so did the co-manufacturing business. “That’s the benefit to being so diversified. When one’s down, another makes up the difference.”

The Zanetos family has been making confections since Anthony Zanetos immigrated to the United States in 1916.

The Greek immigrant learned how to make candy when he moved to Columbus, Ohio, and he opened a series of confectioneries starting in 1926, including the Farmer’s Co-op Dairy in 1932. None of the businesses gained steam until his son, Tom Zanetos, returned from serving in World War II.

Though he thought he would go back to the meat business after the war, Tom Zanetos, as a service member in the candy business, secured a 30,000-lb. annual allotment of sugar. That was a perfect fit for Anthony, who always wanted to have a father-son business.

Tom Zanetos and his father founded Anthony’s Confectionery where the co-op used to be, serving ice cream and candies and offering a soda fountain. Then, in 1947, the duo opened the Crystal Fountain, where they served sandwiches, ice cream and candies. The candy business grew so fast they decided to concentrate on making candy full time, using their first names to form the Anthony-Thomas Candy Co. in 1952. 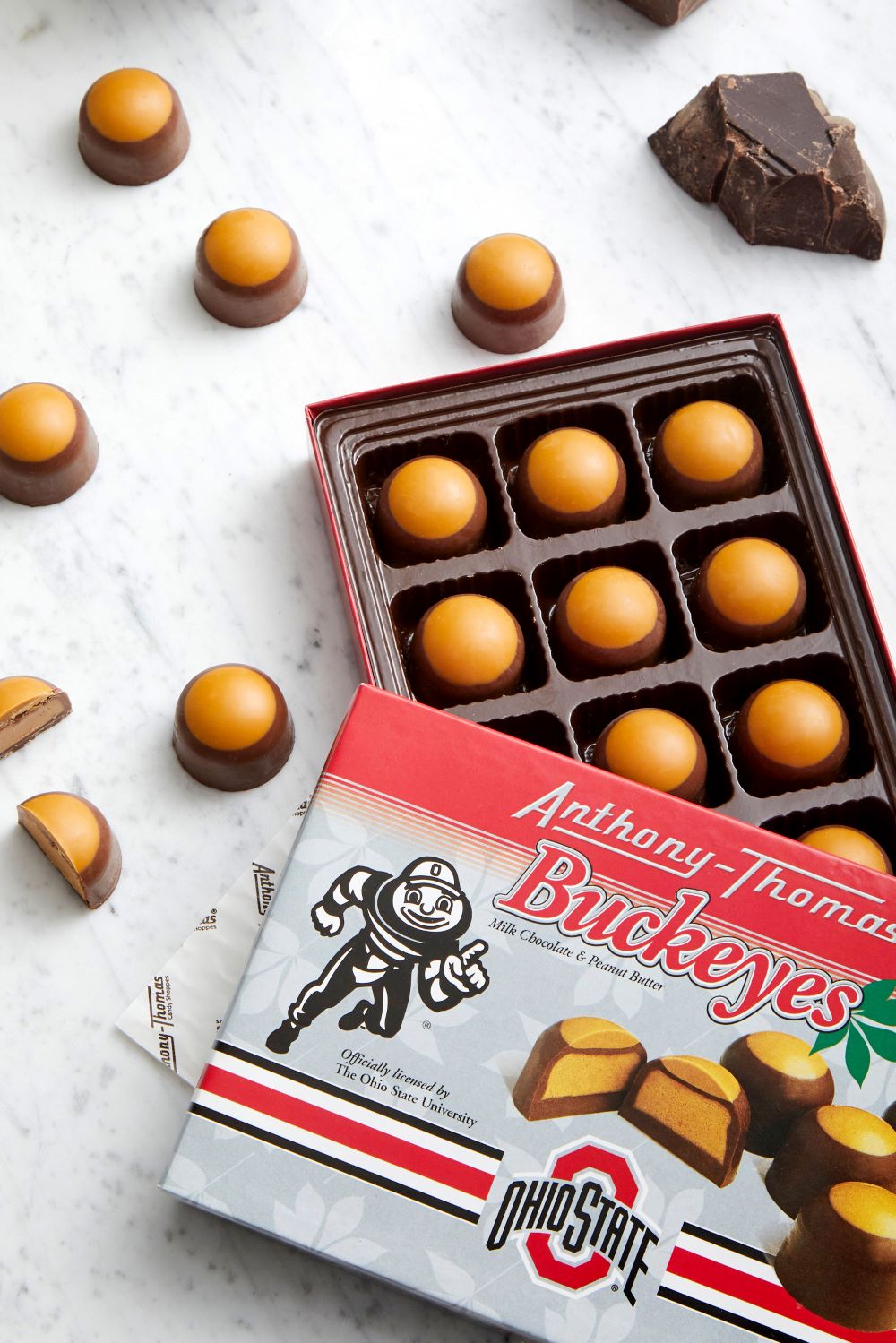 Anthony-Thomas is known for its chocolate and peanut butter buckeyes, which resemble the nut from the Ohio buckeye tree. — Photo from Anthony-Thomas.

Through the years, three of Tom Zanetos’ sons – Joe, Greg and Tim – joined the company, each running a portion of the business. Joe Zanetos’ daughter, Candi Trifelos, and son-in-law, Steve Scully, joined later and became vice presidents after Greg and Tim retired in 2019. With the premature death of Scully in 2020, the company has introduced the fifth generation, with Candi Trifelos’ son, Nick Trifelos, heading up the sales and marketing divisions.

Anthony-Thomas began making and selling chocolates to other businesses when it incorporated in 1952. The company opened its first store and expanded into fundraising in those early years. By the 1990s, the business began taking co-manufacturing orders from big-name brands, using the client’s own ingredients and formulas. Along the way, the company opened more retail stores.

However, over the last 10 years, the company has focused on getting the Anthony-Thomas name out there.

“We’re trying to get our brand more widely distributed, hopefully on a national basis,” Zanetos says. 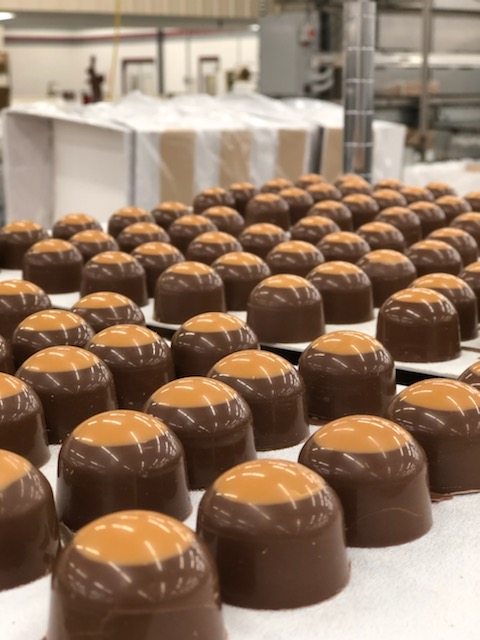 That means the company’s co-manufacturing contracts are second in line to the Anthony-Thomas brand, which was not always the case. In fact, buckeyes sales have increased this year at least 25 to 30 percent, Zanetos notes.

“It’s year-round, not just during OSU football,” he says, referring to The Ohio State University football team, which uses the buckeye as its symbol.

Zanetos says Anthony-Thomas plans to introduce a three-piece buckeye pack in convenience stores before the football season resumes next year.

The company also designed and built in-house an automated moulding line, which fills moulded bunnies, Santas and other items with its computerized chocolate depositor, which can detect the correct amount of chocolate to pour in each mould. The company also developed its own polycarbonate plastic moulds using magnets embedded in the plastic to hold the moulds together.

COVID was not the first time the company faced challenges. Anthony-Thomas used to make candy for several airlines that gave chocolates to fliers. After the 9/11 attacks, and airlines re-opened for business, those airlines cut costs by discontinuing the chocolate favors. Anthony-Thomas never regained that business. 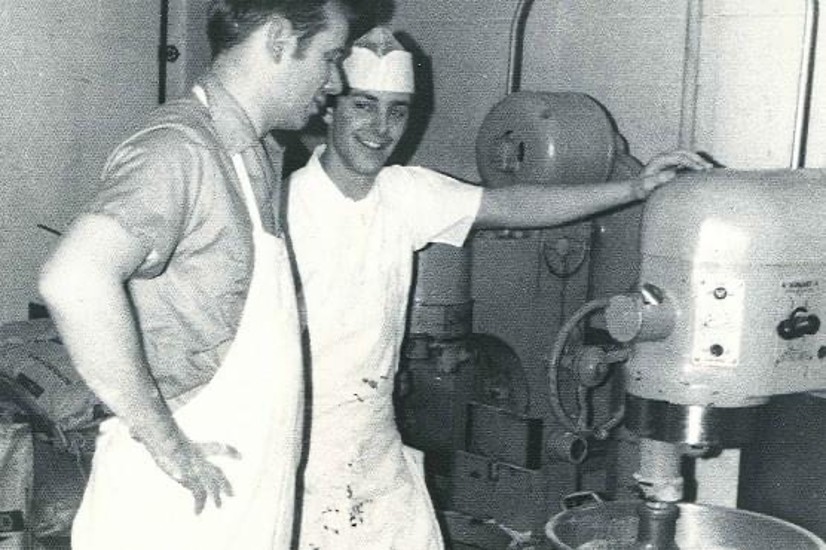 During the 2008-09 recession, when Americans watched their wallets after the housing crisis, Anthony-Thomas lost all its co-manufacturing business. Large candy companies that had Anthony-Thomas make their products were also losing their own business, so they brought the manufacturing back into their fold.

But as the economy turned around, so did business. Today, securing business isn’t the issue, but staffing and supply chain are concerns, Zanetos notes, as well as lead times and increased prices across the board.

Now, obtaining plastic bags is a concern, since fundraising organizations like to use them to carry chocolate bars. The bars are sold in 180-bar cases, with six bags of 30 each.

Like other companies, Anthony-Thomas struggled in 2020. At the beginning of the pandemic, the company “had to cut staff and tighten their belts” due to the reduced business. The company’s 13 retail stores cut hours, and some stores temporarily closed because of staffing.

But the company was lucky to be open at all, as the state of Ohio shut down all retail operations in the first months of the pandemic unless the retailer was selling a necessity, such as food. Fortunately for Anthony-Thomas, candy is still considered food. Other retailers forced to shut down never reopened.

As Anthony-Thomas stores remained open, its factory continued production, but staffing became an issue, as some employees became afraid to work. With protocols such as wearing masks, using hand sanitizer, maintaining social distance in their shops, installing plexiglass at the register, and offering curbside pickup, Anthony-Thomas salvaged some 2020 Easter sales.

There was a silver lining during this period. Although the company had an ecommerce business before the pandemic, COVID pushed it to the next level. 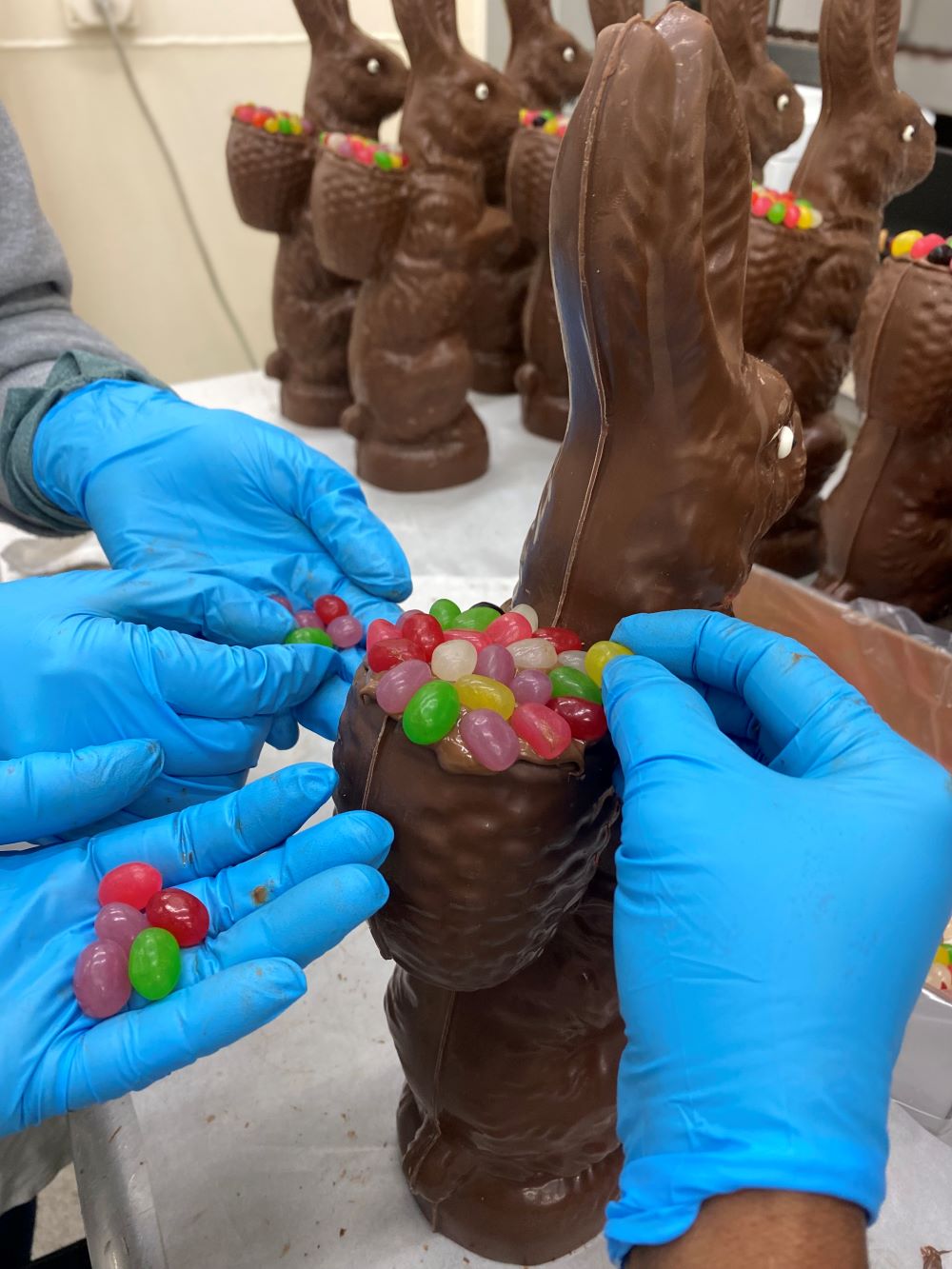 “Ecommerce went way up and stayed up,” Zanetos says. “But we didn’t make up for everything we lost.”

Anthony-Thomas had begun doing business with Amazon vendor Mixt Solutions before the pandemic, but since, the Amazon business has picked up 10-fold, Zanetos says. The vendor has an exclusive deal to sell Anthony-Thomas chocolates, and it has promoted the brand across its distribution.

“They can do it a lot better than we can,” she says, noting they track sales and ensure unauthorized vendors are not trying to sell Anthony-Thomas products online.

“Last year our cherry cordials were the No. 1 selling cherries on Amazon in the country,” Zanetos says.

It is not just Amazon. Anthony-Thomas’ direct ecommerce business continues to grow as the brand spreads across the country.

“We’re doing a lot more direct ecommerce right through us, which is cheaper than going through (a third party),” Zanetos says.

“We sell as much product as a retail shop without the rent, utilities, maintenance and staffing,” she says.

Anthony-Thomas increased its digital marketing efforts when Nick Trifelos joined the company. He launched Anthony-Thomas’ social media ads in 2018, two years before he graduated from Butler University. Since starting full-time in 2020 as national sales and marketing manager, he became instrumental in updating the company website, which has led to 330 percent growth of website traffic. 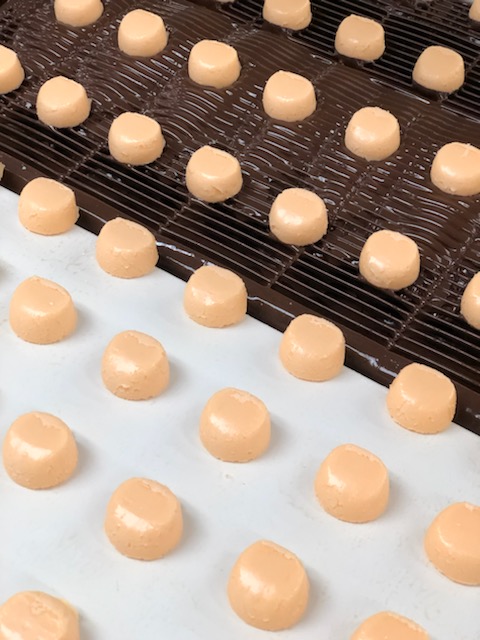 Orange cream centers are enrobed in chocolate. — Photo from Anthony-Thomas.

In fact, the company is running almost exclusively digital ads, moving away from traditional forms of advertising. Candi Trifelos says consumers fast-forward through television ads and do not read the newspaper. “The younger generation doesn’t listen to radio,” she says, adding the company still likes to tie their ads with the OSU games.

“We like community-based things where you get value added,” she says, pointing to Anthony Thomas’ sponsorship of community programs like “Top 20 Women in Business” and “Rising Youth.”

“We’ve seen a lot of success with that,” Nick Trifelos says. “Door Dash has introduced us to another set of buyers.”

Anthony-Thomas also connects with the Columbus community through public tours, which have resumed after the pandemic. The manufacturing plant, which also houses its offices, warehouse and flagship retail store, was expanded another 2,000 sq. ft. in 2016 to accommodate bus tours. The addition has several restrooms and a conference room that accommodates 65 comfortably.

Anthony-Thomas offered public tours before it moved in 1995 to its Arlingate Lane location, on the west side of Columbus. Before COVID, the plant averaged 30,000 tours a year, according to Zanetos, and that number is slowly climbing to pre-pandemic levels.

Visitors walk on a 380-ft. suspended catwalk, from which they can see production in process. The tour includes views into the 8,000-sq.-ft. kitchen, which houses four ball beaters, a Firex caramel cooker, six Savage fire mixers and two Hobart mixers, as well as a Stephan vacuum mixer, caramel cutters, a cream depositor and five water-cooled slab tables for making toffee, brittle, caramel corn, and fudge. 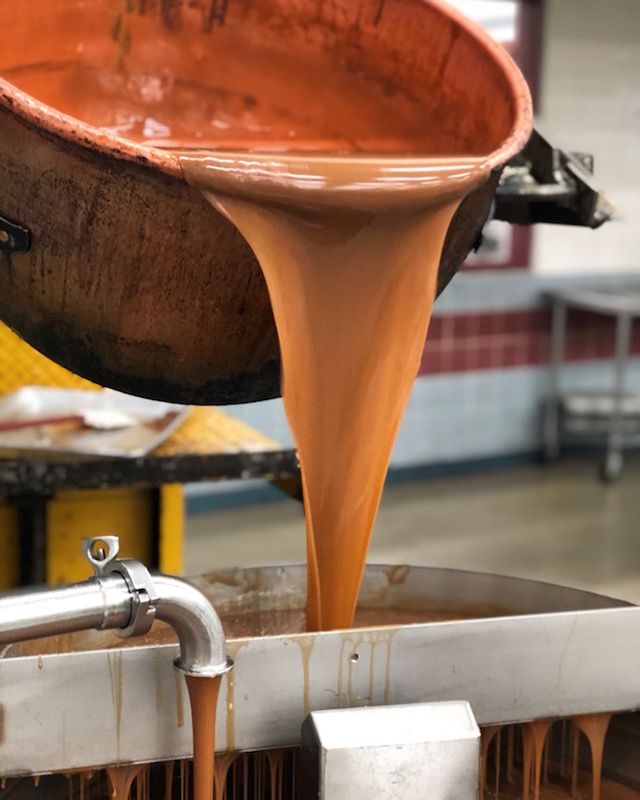 Caramel is poured from a copper kettle to cool.— Photo from Anthony-Thomas.

In another area of the tour, visitors can see enrobing of caramels and pretzels and shell-moulding of pieces such as cherry cordials and truffles. Visitors can also see employees packing gift boxes and stock boxes, as well as candy bars being wrapped by G.D. or Sapal wrappers. Anthony-Thomas also has Nuovofima foil wrapper that wraps cherries at a rate of 300 pieces per minute, and two high-speed Ilapak flow wrappers that wrap 400 pieces per minute.

Seasonally, the company hosts a public open house, and about 5,000 visitors see moulding of Easter bunnies, filled eggs being decorated and Easter baskets being assembled. During the Valentine’s Day season, visitors can view heart boxes being packed. The tours end in the 4,000-sq.-ft. retail store, where visitors can choose from over 80 varieties of chocolate-covered confections, fudge, mints, and nuts.

Nick Trifelos, who used to give tours himself, says they help business. The family hopes the tours connect the younger generation with the Anthony-Thomas name, and that those kids ask to return with their parents. 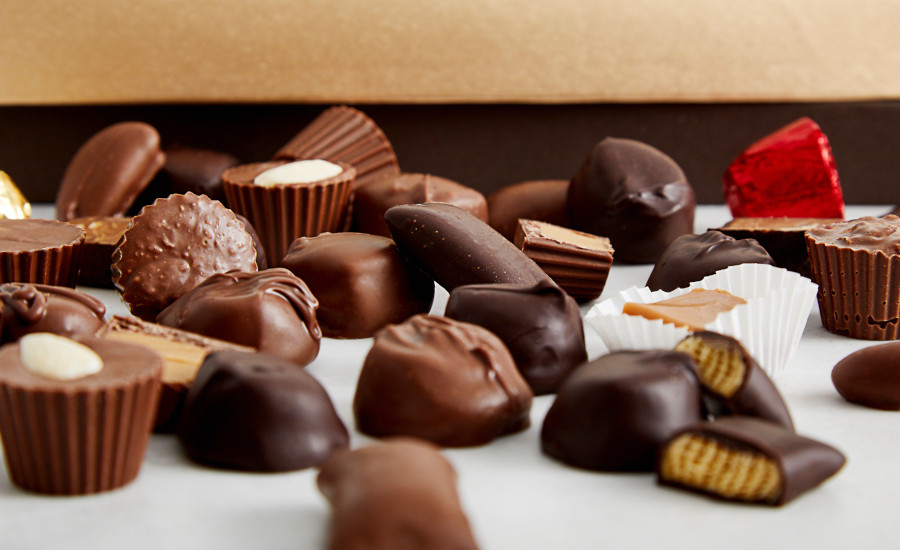 “The tours create that emotional connection,” says Nick Trifelos. Often people will say to him, “I remember when my class came through and getting that sample.”

So where does Anthony-Thomas go from here? Zanetos says that is something to ponder.

“Our business is growing in every direction,” he says. “Where do we want the emphasis to be? We are being bombarded with so many enquiries. I think the Anthony-Thomas brand is starting to make some inroads. We have more people wanting us to do business. We’re putting a lot of emphasis on growing our own brand, as well as continuing our fundraising and co-manufacturing.”

Zanetos, who just turned 75, notes he may not be around in 20 years (though his dad worked until he was 93), but he is not planning to retire anytime soon. In fact, he often tells his family he will continue to work until “they have to carry me out feet first.”

In the meantime, he, along with the rest of the family, is always open to the idea of doing new business.

“We’re continuing to grow,” Zanetos says. “The family continues to operate it, and they want (the business) to grow.”