Gums And Mints: A sticky segment

When it comes to gum and mints, sugar-free gum may have the most sales ($2.6 billion), but breath fresheners and mints actually saw the largest growth (4.34 percent and 4.35 percent respectively).

First, there’s gum. Sugar-free gum is still far out-selling gums with sugar, but the sugar-free gum category actually saw a slight decrease in sales over all since last year. And gum sales overall were down a bit as well.

Specifically, dollar sales of gum sales overall  — including sugar-free and gums with sugar — were down over the last year 1.06 percent to $3.1 billion.

And while sugar-free gum contributed to the decrease with a 1.80 percent decrease in sales to $2.6 billion, sales of gum with sugar were actually up 2.83 percent to $523.1 million. That’s all according to data from IRI, a Chicago-based research firm. The figures looked at sales over the last 52 weeks, ending April 19, 2015, the latest data available.

As per usual, Wrigley dominated gum sales, as the leading company for both sugar-free gum and gums with sugar.

It’s sales of gums with sugar were up 4.98 percent to $383.3 billion, and it owns eight of the top 10 brands, including: No. 1 Wrigley’s Double Mint, No. 2 Wrigley’s Juicy Fruit, No. 4 Wrigley’s Spearmint, No. 5 Hubba Bubba Bubble Tape, No. 6 Wrigley’s Big Red, No. 7 Wrigley’s Winterfresh, No. 8 Freedent, and No. 9 Hubba Bubba Max. Concord Confections Inc. does own the No. 3 brand, Double Bubble, with Mondelez Int’l’s Bubbleicious rounding out the top 10.

As for sugar-free gum, Wrigley’s sales were actually down 1.83 percent to $2.6 billion. However it still led the category, and owns three of the top 5 brands, including No. 2 Orbit, No. 3 Wrigley’s Extra Sugarless, and No. 4 Wrigley’s Eclipse. Mondelez International’s Trident led the segment at No. 1, with The Hershey Co.’s Ice Breakers Ice Cubes rounding out the top 5.

“Bringing together the delicious flavors of strawberries and raspberries, this gum is sure to delight consumers,” the company says.

And, it’s also launched Juicy Fruit with Starburst Flavors in the last year. The sugar-free gum offers all the fun of Starburst without the sugar. The gum comes in two flavors, including: Starburst Strawberry and Starburst Cherry. The S.R.P. for the gum is $1.19 for a 15-stick single serve and $2.69 for a Multipack with three 15-count envelope packs.

However, not all companies are looking to the newest candy flavor. For Verve Inc.’s Glee Gum, it’s more about finding a way to create an all-natural gum combined with texture innovation. Late last year, the company debuted its new Glee Gum Pops.

“There’s all-natural gum, and there are all-natural lollipops, but now, for the first time, consumers can enjoy these two treats in one with Glee Gum’s all-natural gum pops,” the company says. “These good-for-you treats are made with no artificial colors, flavors, sweeteners or preservatives.”

Featuring a hard candy lollipop around a gooey bubblegum center, they come in three flavors, including: sweet strawberry, crisp green apple and juicy orange flavors. Glee Gum also says its products are the only ones on the market that still use chicle as a gum base, a testament to Glee Gum maker Verve, Inc.’s commitment to being environmentally responsible.

And, it owns the No. 1-selling brand Lifesaver Plain Mints, which saw a 1.9 percent increase in sales to $114.8 million in sales.

With mint and breath fresheners doing so well, it’s no wonder that Hershey’s latest addition to the category is a minty breath freshener, Ice Breakers Cool Blasts Chews.

Hershey hopes the chews will appeal to consumers on the go.

It’s packaging is also innovative. The chews are available in an 0.8-oz. slide pack.

Ice Breakers Cool Blasts Chewscome in spearmint and peppermint flavors and are now available with an S.R.P. of $2.09.

When it comes to the specific flavors consumers are looking for in gums and breath fresheners, a new report from FONA shows that mint is still by far the most popular.

In North America, unspecified mint is the leading flavor.

“Unspecified mint usually is a peppermint dominant mint blend (often a sweet mint or a peppermint with some herbal notes),” the report says.

“While cinnamon and other spices are not technically mint, they offer a similar freshening value proposition to consumers and are therefore considered among the mint category,” the report says. “Cinnamon is in the top 10 flavors featured in gum and mint products, although not as prevalent as the others.”

Up and coming freshening components include flavors such as eucalyptus, menthol, ginger and tea flavors. Popular mint pairings include a variety of fruit flavors, especially citrus.

In other regions, mint, peppermint, and spearmint still dominate with some variations by region.

“In Europe for example, cinnamon is not nearly as popular in breath freshening products,” the report says. “The current surge in the use of warm spices in the European oral care segment however, might change that in the near future. In Europe, more highly mentholated products are much more popular than in the U.S. Herbal mints, eucalyptus, tea flavors and the use of chlorophyll to enhance a freshening proposition are significantly more popular.”

As for Asia Pacific, the leading flavor “mint”, includes more mint profiles that can be considered to have herbal notes.

“Peppermint and spearmint are still extremely popular but rank behind strawberry and lemon in leading flavors,” the report explains.

Overall, the whole thing sounds pretty refreshing — as long as no one get stuck. 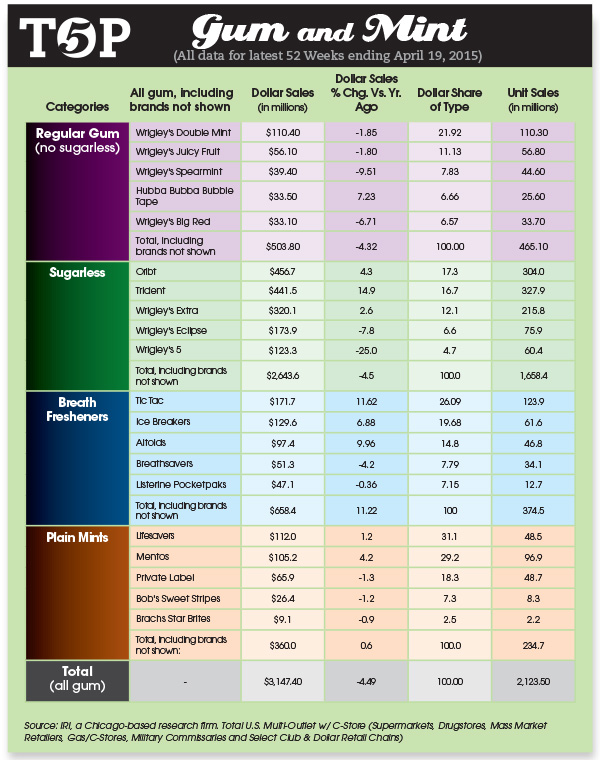