How will Lindt’s acquisition of Russell Stover change the U.S. premium chocolate segment? 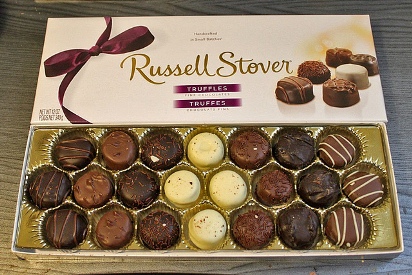 The acquisition will firmly establish Lindt as the No. 3 chocolate candy manufacturer in the U.S. market — still behind Hershey and Mars, but now firmly ahead of Swiss rival and global food leader Nestlé.  This development has far-reaching implications for premium chocolate in the U.S. market, particularly in the seasonal and gift-box market segments.

The deal will combine one of the U.S. market’s best-known gift chocolate companies with a global player that has been working hard to grow its presence here.  Lindt previously, in 1998, acquired the popular San Francisco chocolatier Ghirardelli.  Lindt's acquisition of Russell Stover also comes on the heels of plans to increase capacity and expand production at its U.S. headquarters in New Hampshire.  With the acquisition of Russell Stover (which also includes the Whitman's and Pangburn's brand lines), Lindt will strike a new balance between made-in-the-USA and Swiss import — with Lindt pointedly stressing its commitment to maintaining Russell Stover headquarters in Kansas City as well as its four manufacturing plants.  The Russell Stover business should benefit from coming under the Lindt & Sprüngli umbrella, under which Ghirardelli has certainly prospered.

Lindt is thereby recasting the premium segment of the U.S. chocolate candy industry, a sweet spot for market growth.  In the U.S. market, premium chocolate sales continue to grow at a faster rate than everyday chocolate.  For example, U.S. sales are up 12% for the premium-focused Lindt, according to IRI mass-market sales tracking for the 52 weeks ending April 20, 2014, compared with only 4% growth for the overall U.S. chocolate candy market, according to Packaged Facts estimates in our recent Chocolate Candy in the U.S. report (July 2014).

Consistent with broader consumer market trends, consumers are willing to trade up from mass-market to premium and prestige brands, particularly since the cost of trading up to premium chocolate brands remains very affordable for most U.S. consumers.  And though consumers may tend to stay within specific price ranges in many candy formats, chocolate is a product with so many perceived values that consumers are willing to pay more for benefits ranging from sourcing to nutrition to tradition or culinary trendiness.

Seeing the growth potential for premium chocolate, marketers have pushed the top brands into ever more mainstream retail venues. Once found mainly in signature retail boutiques or prestige outlets such as departments stores, chocolate brands including Lindt and Ghirardelli as well as Cadbury, Ferrero Rocher, Perugina, Toblerone, along with prestige brands such as Godiva — can now be found in grocery, mass and drugstore aisles, often stocked right next to (and price promoted similarly to) everyday mass-market brands.

The dynamic U.S. chocolate candy market has always attracted European chocolatiers.  While the U.S. chocolate market has certainly developed its own deluxe brands, European purveyors still benefit from Old World prestige and a sort of home-court advantage in the history of commercial chocolate, particularly for premium and prestige brands.  Based on the success of marketers such as Lindt, Ferrero, and Godiva in the U.S. market, the exploration by European chocolatiers of opportunities in the U.S. market is likely to continue gaining momentum.

Lindt is not disclosing the purchase price or other details related to the acquisition.  The Ward family owners of Russell Stover hired Goldman Sachs in 2014 to sell the company, reportedly at an asking price of about $1 billion.  As of mid-May 2014, interested bidders for Russell Stover had included Godiva parent Yildiz, Hershey, and several private equity firms.  (“Russell Stover’s Slow, Candy Bar-Free Rise to a Billion-Dollar Asking Price,” Bloomberg Businessweek, February 24, 2014; “Hershey, Yildiz, and Private Equity Firms Make Bids for Russell Stover, Wall Street Journal, May 16, 2014).

A analyst at J. Safra Sarasin quoted in  Bloomberg Businessweek (July 14, 2014) characterized the sale price, at “probably more than 20 times” EBITDA, as “not a bargain” compared with Lindt’s ratio of enterprise value to EBITDA of 16.6.

Market pundits may see Lindt’s agreement to purchase Russell Stover as a bit of a stoop for the former and a lucky break for the latter.  We see it as a strategic move for both businesses.  Overall Lindt & Sprüngli operations will gain considerable domestic brand heft in the largest candy market in the world, including access to Russell Stover Candies’ long-established and diverse retail reach, shelf space allotments, and visibility in seasonal merchandising, including its strong presence in drugstores (a channel that will gain importance in an aging America).  Russell Stover will gain access to Lindt’s world-class resources and tradition of chocolate manufacturing. Moreover, the product portfolios of the two businesses will round out revenues by product segment. While IRI-tracked mass-market sales of the Lindt and Ghirardelli brands dwarf those of Russell Stover or Whitman’s in the chocolate candy box/bag/bar > 3.5 ounces segment (the home court of larger candy bars), the Russell Stover brands turn the table in the case of seasonal (non-gift box) Valentine’s Day candy, gift box chocolates, sugar-free chocolates, and seasonal (non-gift box) Easter candy. With regulatory approval of its acquisition by Lindt, Russell Stover will account for about 40% of Lindt’s total North American business of $1.5 billion.  In turn, Lindt’s North American business would account about 40% of the combined Lindt & Sprüngli revenues of $3.7 billion.  In the U.S. market, the combined Lindt/Russell Stover business (which currently would account for an 11% share of mass-market sales, as tracked by IRI) would represent a somewhat less distant third to Hershey (at a 42% share) and Mars (28% share).  In conjunction with the U.S. business expansion for Lindt, the acquisition of Russell Stover would round out Lindt & Sprüngli’s draw among U.S consumers.

Packaged Facts Chocolate Usage Survey (April/May 2014) of U.S. adults shows that the Lindt and Ghirardelli brands are purchased at about the same rate for everyday eating as for holidays/special occasions/gifts, while Russell Stover and Whitman’s are still bought more often for holidays/special occasions/gifts.  In addition, the Lindt brand draws disproportionately among younger and coastal/top metro adults, compared with the more tradition-minded, geographic heartland customer base for Russell Stover, Whitman’s, and Pangburn’s. 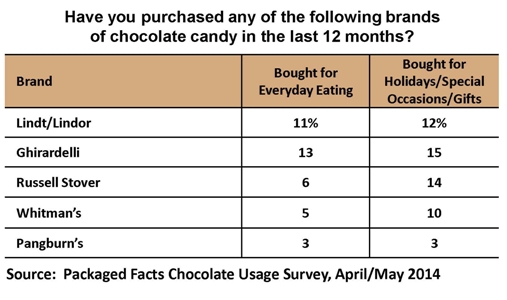 This information is excerpted from Packaged Facts’ July 2014 report, Chocolate Candy in the U.S., 10th Edition.