Jean-Paul Burrus graduated college in 1973 and officially started work in the family business in 1980 — but his career in the confectionery sector really started decades before that.

“As you can imagine, my career in the chocolate industry didn’t start in 1973 ... or officially in 1980, but directly when I was born,” he says. “However, every year before 1980 I was considered a volunteer — but I think this is a tradition in the family companies.”

These days Burrus, who is president of the France-based Salpa, is on the other end of the work spectrum, partially retired and sharing his passion for chocolate with his team.

“What is retired? It is to do what you want to do, when you want to do it,” Burrus says. And that’s exactly what he does. But just like before, he’s still working for the family business, managing things, spending time with customers, and visiting SALPA cocoa fields in Ecuador as well as its hazelnut fields in the south of France.

Burrus recently was named as the winner of the European Candy Kettle Club, which was founded the same year Burrus graduated college, 1973. It was created by Don Gussow, founder of the American Candy Kettle Association as well as Candy Industry Magazine, in cooperation with Guy Urbain, an eminent Parisian confectioner.

The yearly award honors “a company representative from the European confectionery industry who has excelled in the confectionery, chocolate and biscuit industry in research and development, innovation in product quality and production techniques and outstanding marketing and sales implementation, as well as a unique contribution to the industry’s progress.” 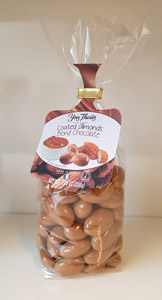 “The European Candy Kettle that I have known since its creation in 1973 by Don Gusow and Guy Urbain, who is an iconic figure in the chocolate industry in France and who was close to my father, who was equally passionate about chocolate,” Burrus says. “Every year, I was impressed by the curriculum of the award laureate and I would never have imagined to become a laureate one day.”

He says it was a great honor to receive the ECKC Award.

“This distinction goes right to my heart and will be an unforgettable memory in my professional career,” Burrus says.

He represents the third-generation working in the confectionery business. Specifically, the Burrus family has been in the chocolate business since 1912, acquiring chocolate brands Yves Thuriès, Schaal, Côte de France and Marquise de Sevigne. Burrus also personally extended the product range, acquiring Belco, which specializes in green coffee, and creating the brand Comptoir Français de Thé, which specializes in tea.

As the ECKC website explains, “SALPA (Société Alsacienne de Participations Agro- alimentaires) is a holding company born from the 1997 merger of the Compagnie Française de Chocolaterie et de Confiserie (CFCC) and the Chocolat et Confiserie de Luxe (CCL), two companies initially founded by Paul Burrus, inspired purchaser of the chocolate brands Schaal, Salavin and Marquise de Sévigné. As pioneers of chocolate, the Burrus family has been passing on innovation and expertise for three generations since 1912.”

The company’s products are distributed in gourmet shops across France and abroad, as well as in a network of 70 stores.

And they are known for their specialty creations. One of their new items is a Kougelhopf sugar-coated chocolate, which features Kougelhopf-breaded ganache, with gingerbread flavors and either milk or dark chocolate. They also recently introduced a Marc Champagne truffle, a 70 percent natural ganache and Goji berry chocolate, as well as a Fruity duo orange cinnamon ganache.

Burrus is famous for overseeing as much of the supply chain as possible — running both cocoa fields and a hazelnut farm. And 100 percent of the cocoa used to create the Yves Thuriès chocolate is sourced from those cocoa fields.

“We control all of process until the final step in gift boxes with a bow in our own Yves Thuriès and Marquise de Sevigné boutiques,” Burrus says.

Salpa’s hazelnut farm, which is in France, is called Pépinière des noisetiers de Guyenne and also has a vineyard attached. As a result, Burrus is also in the wine business. He purchased the hazelnut farm in 2001, as one of the first steps to controlling more of the confectionery-making business.

Meanwhile, he purchased the cocoa fields in Ecuador in 2014 and now they own 540 hectares of cocoa trees in the South American country, and it has become the group’s primary cocoa source.

Since owning the cocoa fields, the company has invested in the modernization of the plantations, improving mechanical processes, the working conditions and constructing buildings.

And the ECKC event was held at the Schaal Chocolatier factory, which has seen massive improvements recently. In fact, Salpa has invested nearly 13 million Euros to modernize the historic site and has introduced a fully automated logistics center with a capacity of 6,800 pallets.

Salpa’s Cedric Bourcier, quality manager, says the room is used to store raw materials, packaging materials and finished products, but all of them are completely segregated. And it’s entirely automated, which means there’s no need for any human interaction.

Burrus says the factory is 147 years old and it has only changed owners once during that time.

“This factory is striving for excellence of production of chocolate dedicated to the most demanding professional, pastry chefs, chocolate makers,” Burrus says.

As it is the site where most of the chocolate is produced, the 15,000-square-meter, IFS-certified factory sits on the company’s main campus, which also includes the company’s tea factory, as well as a restaurant and a chocolate museum.

It is located on the French side of the French-German border, and thus Salpa and Burrus have seamlessly blended both the passion and creativity the French are known for with the diligence and precision the Germans are famous for.

“With his team of 700 people in development, production and logistics, he manages to produce over 1,200 products,” the ECKC website explains.

The chocolate factory there runs two eight-hour shifts, five days a week and produces about 2,300 tons of chocolate a year, which is shipped to boutiques and stores all over the country and the world.

One of the specialties in the factory is the praline production. The pralines, which are made with hazelnut or almonds with sugar, is produced in house in copper cauldrons that give it an authentic taste.

The smell of the nuts and the sugar fills the air, and the three copper cauldrons are heated to 180°C for 15 minutes for each batch. The pralines are then cooled on long tables before being broken down to be used in some of the chocolates made at the factory.

But the main attraction is the chocolate. The factory produces four ranges of products, including chocolates, moulds, marbling and snacking.

The factory is able to produce 600 different types of chocolates, with 40-50 new products a year, and they also are able to create small, personalized batches, with a minimum production of just 500 kg.

The packaging line is automated, featuring blue robot arms that can package 500 chocolates per minute. The company can even package different shapes by using a different hand for the various pieces, creating the assorted boxes of chocolates.

And after they are boxed, they are sent off to spark joy in chocolate lovers across the world — which includes everyone, according to Burrus. He says he views the world through one statistic: 90 percent of people like chocolate and the 10 percent who say they don’t are liars.

“I owe this passion about chocolate to my father and my mother, but also to the complicity I shared with all my colleagues at Schaal factory who always allowed me to find a huge pleasure in my job,” he says. “The main feature of Schaal factory is the deep and emotional attachment of the employees to the company.”