Chef Michael Antonorsi understands that in order to spread joy, you have to feel it.

While he certainly feels joy now — and delivers it to chocolate lovers all over the United States — the co-founder and culinary mind behind Carlsbad, Calif.-based Chuao Chocolatier took years to get there.

Born to a Venezuelan father and a German mother, Antonorsi strove to please his parents, but at first he didn’t know how.

“Parents love their children — they want the best for them,” Antonorsi said, settled in the pristine, contemporary meeting room at Chuao’s Carlsbad facility. “They want to make sure they don’t fall into hardship. They pushed me, pushed me, and I loved the challenge.”

Antonorsi graduated from high school in Venezuela at 16 and enrolled at the University of California-San Diego to pursue a bachelor’s degree in biomedical engineering. While impressive in its own right, Antonorsi was drawn to the idea of creating prostheses, not unlike the ones he saw Steve Austin (Lee Majors) wear in “Six Million Dollar Man.”

“When you are a confused child and driven by challenge, I thought I’d do the most difficult thing I can do, and then later on the easy things. That was my crazy idea,” he said.

Toward the end of his undergraduate career, Antonorsi often cooked for friends and classmates between lectures and labs. When he graduated, all Antonorsi wanted to do was cook, but it wasn’t in the cards — yet.

“I didn’t have the heart to tell my father, ‘here’s your diploma, now I’m going to go be a chef,’” Antonorsi said. “I never gave him the chance, honestly. If I would’ve asked him, he probably would’ve said, ‘Sure, now that you have the diploma, go do whatever you want.’”

Antonorsi returned to Venezuela to pursue an MBA and launch a computer networking company with his brother, Richard. The business grew to have three regional offices and 60 employees.

But, even with that success, Antonorsi wasn’t satisfied.

“Sometimes you need to go through it so you know that’s not what you want to do,” he said. “I was fortunately able to step out of that and not live in that trap forever.”

Now with sufficient resources, Antonorsi set his sights on culinary school in France. In 1999, he moved his wife, Isabella, and two daughters to Paris and enrolled in the École Supérieure de Cuisine Française Ferrandi.

Though a technical high school for young people, it also offered a program for foreign students. Antonorsi enrolled, winning the chance to study under world-class chefs and work with high-quality ingredients. 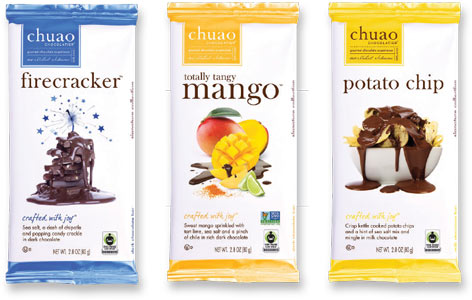 “It was just heaven,” he said. “I worked my butt off, but it never felt like it was work.”

The following year, Antonorsi took turns specializing in pastry, bakery and chocolate. However, after two years he and his family grew tired of wet, gray Paris. Antonorsi’s entrepreneurial spirit called him to sunny, inviting San Diego.

In partnership with Richard, Antonorsi co-founded Chuao Chocolatier in Encinitas, a northern suburb of San Diego, in 2002. They named the business Chuao, pronounced “chew-wow,” in honor of the cacao-growing region of Venezuela. A problem arose, however.

“We didn’t know it was so difficult for English speakers to put three vowels together,” Antonorsi said. “Their only word is ‘luau’ — everybody does really well with that, but Chuao, it’s either ‘chua, chia, chihuahua, chow, chi.’”

There's an easy explanation, Antonorsi said. Anyone who tries a Chuao creation chews and then says "wow."

“Maybe it’s a difficult name to pronounce, but if you get to understand that, you’ll never forget it,” Antonorsi said.

The name wasn’t the only challenge he encountered. At first, with help from Isabella, Antonorsi made and sold European-style bonbons and truffles at the 1,200-sq.-ft. Encinitas store. While luxurious, they had short shelf lives and weren’t the best for wholesale.

Nonetheless, Chuao expanded to six retail stores and outgrew manufacturing facilities a few times. Meanwhile, to improve wholesale opportunities, Chuao moved into chocolate bars. As that side of the business flourished, Antonorsi decided to reevaluate his mission.

“Slowly we started understanding what we were all about,” he said. “Eight, nine years into the game, I realized what’s really relevant about what we do is how we make people feel when they eat our chocolate.”

Antonorsi let leases on the retail stores expire, and in 2016, Chuao consolidated manufacturing and retail operations into a former JC Penney distribution center in Carlsbad. 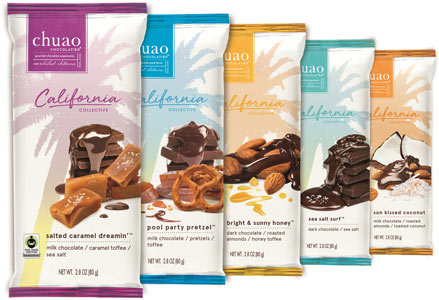 Designed by Isabella, an architect, and San Diego-based Ocio Design Group, the 30,000-sq.-ft. space serves as a hotbed for creativity, collaboration and community. In addition to hosting corporate and private events, Chuao offers guided tours and truffle-rolling sessions.

Bringing customers and chocolate lovers to the factory was paramount, Antonorsi said.

“We who are here every day take it for granted because we’re here every day,” he said. “When you see the faces of people coming in, their smiles, it’s just energy that flows in our direction and lifts our hearts.”

“With my culinary inclination to do these premium experiences, I really think that we have a very delicious chocolate that we add this combination of ingredients and inclusions to, finishing up the whole picture of what’s being offered,” he said.

Antonorsi also creates bars that play with classic desserts. The Oh My Smores! bar, with milk chocolate, graham cracker pieces and hand-pressed marshmallows, represents the experience of sitting around a campfire with the gooey treat. Other dessert-inspired bars include Caramel Apple Crush, Cheeky Cheeky Churro, Ravishing Rocky Road and Sprinkle Dreams, patterned off the chocolate-filled tip of an ice cream cone.

“It’s not just about listing ingredients — it’s about offering you a connection with the experience you’re going to have,” Antonorsi said.

Last year, Chuao introduced the California Collective, a series of bars paying homage to California’s openness through recognizable ingredients such as almonds, toffee and coconut. That line, which Antonorsi plans to expand in the future, was created to reach consumers across the U.S. and beyond.

“We’re sharing a little bit of that California sunshine with the rest of the country,” Antonorsi said.

In alignment with the overall shift toward better-for-you snacking, earlier this year Chuao launched the Moon Bark collection, round discs of 72% dark chocolate with superfood inclusions such as quinoa, golden berries, blueberries and chia. 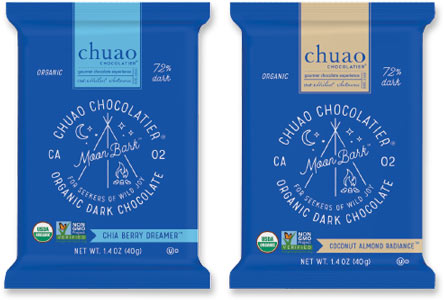 “It merges together not only the better-for-you factors, but within the more mystical aspects of being outdoors and connecting with the universe and nature,” Antonorsi said.

But that’s not Antonorsi’s last foray into snacking. He’s launched a new brand — Wild Joy Goods — under which he’s introducing plant-based products. It gives Antonorsi another outlet for his ever-bubbling creativity an opportunity to capitalize on the snacking trend.

“Every sign on the road tells you that snacking is growing,” he said. “Somehow eating engagements where you sit down for a long, complex meal are not frequent. Everyone is on the run.”

But, whether it’s chocolate, bananas or another canvas, Antonorsi is sure to try to create something beautiful — and full of joy.

“Food is what I think of, dream of all day long,” he said. “There’s such pleasure around it and making it. Somehow it just flows in me.”