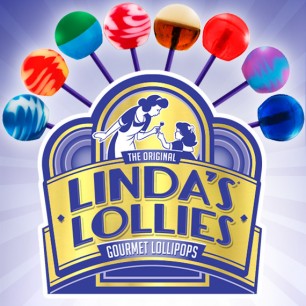 That same year, the trio acquired Linda's Lollies, a brand introduced by industry pioneer Linda Harkavy almost 30 years ago. Harkavy built her company on the premise of offering the highest quality lollipops in a variety of exotic flavors and is considered by many to have been the first to introduce gourmet lollipops into the market.

With the recent introduction of similar products, Yolo set out to distinguish Linda's Lollies from the competition and reinforce its position as the pre-eminent gourmet lollipop brand with its “You Only Live Once Attitude.”

That effort began by creating an optimized assortment of 24 new gourmet flavors, including intriguing new taste concepts such as Mango Chile, Blueberry Muffin and Maple Pancake. Each flavor has been specially crafted to deliver superior flavor intensity and accuracy.

The company also worked on improving the appearance of Linda's Lollies, which now come in a variety of interesting color combinations: bright translucent, opaque, swirled and half-splits, all on a unique purple plastic stick, “making these new pops look as good as they taste,” the company says.

Linda's nostalgic packaging has been updated to project its premium positioning and strong branding. Even the wraps have been re-engineered to feature a notch for easy opening, eliminating the difficulty consumers experience when trying to open twist-wrapped lollipops.

The final step in re-vitalizing the brand involved developing a range of new display solutions that enable retailers to merchandise Linda's Lollies in a variety of impulse locations. With these significant, consumer-targeted improvements in taste, design, and display, Yolo Candy Co. believes Linda's Lollies will once again distinguish themselves from the competition as the highest quality gourmet lollipop in the world.

Silverstein, who was the ceo at Topps, is the founder and ceo of Yolo, while Budd, Topps former v.p. of marketing, is the company’s chief marketing officer. Greer, who’s Yolo’s chief sales officer, was v.p. of sales and customer marketing for Topps.