The State of the Industry: Rising in the East

Horace Greeley, the U.S. author credited with urging 19th century
Americans to “Go West, young man,” envisioned the spacious lands beyond the Mississippi as key to rescuing thousands upon thousands from poverty and unemployment. The caveat in the directional urging; they must be willing to work hard tilling the soil.

Within the global confectionery marketplace, today’s Greeley paraphrase might sound like this, “Look East, confectioners!” And in this instance, East refers to the Asia-Pacific countries demonstrating exceptional growth in chocolate as well as other confectionery segments — a welcome tonic to the more mature and competitive confectionery markets in Western Europe and North America. As with Greeley’s advice; to succeed, confectionery companies must be willing to work the land.

Recent headlines amongst major chocolate processing companies as well as multinational confectionery operations suggest that the increased consumer interest in confections in Asia Pacific countries, coupled with the potential for even higher per capita consumption, hasn’t gone unnoticed. 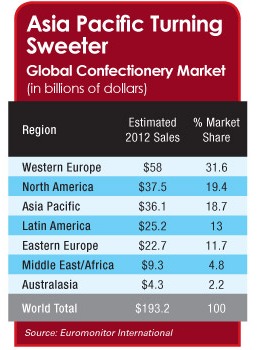 Let’s start with Barry Callebaut’s plans to acquire Singapore-based Petra Foods, the largest supplier of cocoa products in Asia, which were announced last December. The goal, as Barry Callebaut explained, was to boost its sales volume “in the fast growing markets of Asia and Latin America…” as well as “give it valuable market and management know-how in Asia.”

Then there’s Cargill’s more recent announcement of its commitment to build a $100-million cocoa processing plant in Indonesia.

As Jos de Loor, president of Cargill Cocoa & Chocolate, explains, “We are excited to be taking this step to strengthen our cocoa operations on the ground in Indonesia. We have seen a significant growth in demand for cocoa products amongst our customers across the region.”

But chocolate processors aren’t the only ones seeing growth in the area. Consider Mondelez International’s first quarter earnings report in early May and its overview. Citing a “strong emerging markets performance,” the company singled out China, India and the Philippines for double-digit organic net revenue growth. 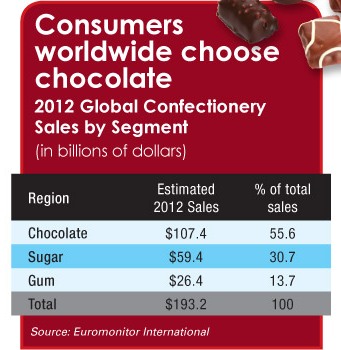 That performance follows news of a 1 percent decline in global gum and candy sales in the first quarter. The decline was even more pronounced in the United States, where sales dropped about 10 percent, mostly because of a decline in gum.

While indicating that there are new initiatives to remedy that situation, Rosenfeld also pointed out that gum sales within emerging markets are growing, particularly in China, which has become the second largest gum market in the world.

In fact, emerging markets account for 40 percent of Mondelez International’s revenues. Rosenfeld, in talking to analysts, reasserted the company’s intentions to “step up our investments in brand building, in sales, in route to market and in capacity…” so that it can “stage our future sustainable growth.”

“Of that, Asia Pacific will account for the lion's share, with regional sales increasing by nearly $570 million to surpass $16.4 billion,” he states in his Passport overview “Moreover, this performance will further solidify Asia Pacific's position as the largest regional sugar confectionery market by retail value.”

These gains are occurring despite a gradual shift toward chocolate, he continues. Even though confectionery sales in India only recorded a $67-million jump, India still posted the third largest gain for sugar confectionery sales. 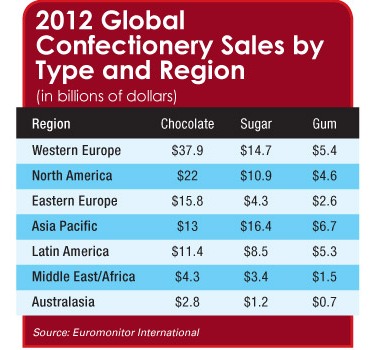 A review of the global confectionery market chart shows the Asia Pacific region accounting for $36.1 billion or nearly 19 percent of the world’s sales, a 13.2 percent jump from last year.

Within the confectionery segments, the region posted 12 percent, 15.5 percent and 9.8 percent gains within the chocolate, sugar and gum segments, respectively.

And while all eyes are on the rising sun in the east for confections, it would be foolhardy not to mention that confectioner opportunities are also tracking in a southerly manner. The Middle East/Africa region, although only accounting for 4.8 percent of all global confectionery sales, posted a 16 percent gain last year.

Within the chocolate, sugar and gum segments, the region recorded 16.2 percent, 13.3 percent and 25 percent gains, respectively.

One shouldn’t ignore Latin America, where a growing middle class in Mexico and Brazil continue to influence confectionery sales.

Two markets — Mexico (up $43 million year-on-year) and Argentina (up $35 million) — are driving this jump in consumption, he adds.  And despite the Mexican government’s efforts to reduce candy intake among the country's children in a bid to curb growing childhood obesity rates, which generate $67 billion (and counting) of public health expenses a year, the Euromonitor International researcher says that consumer demand remains strong. Novelty items targeted toward children, particularly those with play value and/or toys, remain popular. No surprise there.

One would be remiss, however, in assessing the global confectionery landscape without turning attention to Mexico’s neighbor up north, the United States, which remains the single largest national confectionery market in the world. 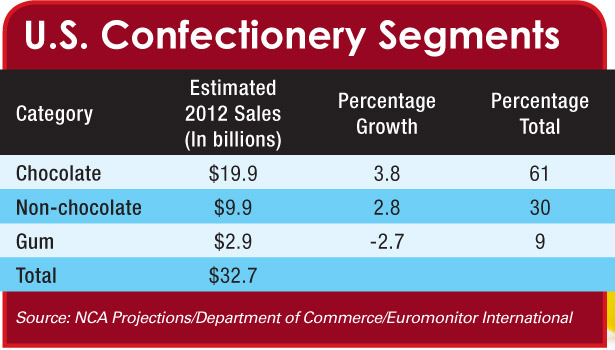 The latest analyses from the Mintel Group, a market research organization, note that both the U.S. chocolate and sugar segments have fared remarkably well despite the recession.

For example, chocolates sales in the United States grew 19 percent from 2007 to 2012 while sugar sales posted a 34 percent surge during the same period. Remarkably, both segments are projected to grow at a 15 percent clip from 2012 to 2017, Mintel says.

An overview of 2012 sales shows that more than 80 percent of U.S. chocolate confectionery sales came from the bag/bar/box and seasonal segments. As the Mintel report details, the bag/bar/box segment featuring items greater than 3.5 oz. accounted for the largest chunk  — $7.5 billion in sales, about 38.5 percent of the market.

The small bag/bar/box segment, which encompasses items less than 3.5 oz., accounted for $3 billion in sales and nearly 19 percent of the market. It should be noted that this represents a 12.7 jump from 2010, clearly a sign that consumers enjoy the convenience of snacking and portion-control sizing in chocolate. 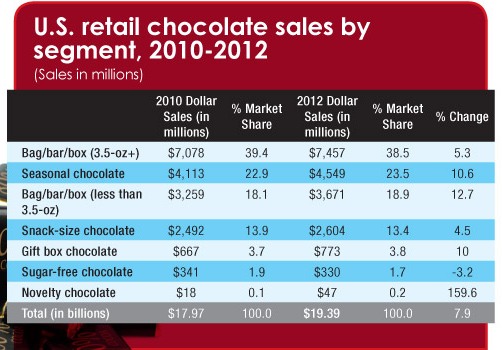 Despite all the press given to the diabetes epidemic, sugar-free sales registered a 3.2 percent decline between 2010 and 2012.

Mintel cites “a lack of options in the segment (due to the dominance of one major brand) and a growing distrust of sugar substitutes…” Clearly, there seems to be an opportunity here, but getting consumer buy-in remains an enormous challenge.

Within the Mintel report, there are several interesting footnotes about the U.S. chocolate segment. 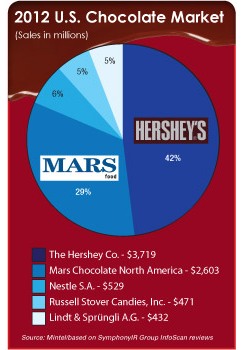 According to Mintel’s research, 15 percent of consumers indicated that they are eating less chocolate in 2012 because the cost of chocolate was too expensive to eat regularly. Here, manufacturers have come up with some response: less chocolate.

Be it through aeration or smaller portion sizes, manufacturers are responding. And so are retailers, increasing their role in offering less expensive, store-brand chocolates.

Another footnote uncovered in the Mintel research involves consumer concerns about sugar and fat content in chocolate. The research showed that amongst the 22 percent of consumers who had indicated that they are eating less chocolate in 2012 than the year before, nearly six of 10 (59 percent) said they are doing so because they are watching their weight.

Of course, here lies another opportunity for chocolate manufacturers — a better-for-you piece of chocolate.

Within this context, it’s important to note that Mintel’s research also showed an interesting dichotomy: 19 percent of those polled said they are eating more chocolate. Such self-cancelling and contradictory numbers reflect living in the 21st century.

Those consumers who said they’re eating more chocolate are doing so because of the following reasons: Nearly half (49 percent) said they are treating themselves; one-third (33 percent) said it was a low-cost indulgence; nearly a third (29 percent) are using chocolate to cope with difficult times; and 28 percent said they are receiving it more as a gift.

So what does the future hold for U.S. chocolate sales? 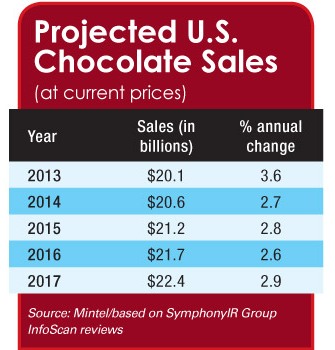 Mintel expects sales to grow by 15 percent from 2012 to 2017, reaching $22.4 billion. There are, naturally, plenty of qualifiers in this projection, such as the absence of drastic price increases or a sharp downturn in the economy.

“The industry is struggling to satisfy faithful chocolate consumers and redefine itself in the face of a new breed of increasingly health-conscious and price-sensitive consumers,” Mintel’s researchers add.

Moreover, the Great Recession instilled a greater appreciation of value within consumers, which is most likely the best takeaway chocolate manufacturers, domestic as well as foreign need to keep in mind.

And what about the non-chocolate sales in the United States? Again, Mintel’s research provides a more positive review than one would expect. 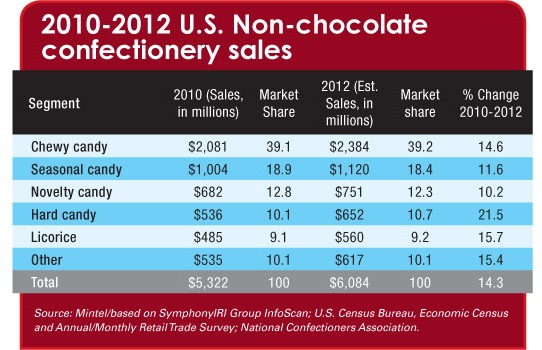 In addition, the most powerful reason that consumers are purchasing sugar confections is…well, because they have sugar or some kind of sweetener. Seven out of 10 consumers polled said they wanted to satisfy a sweet craving, Mintel’s research revealed. And more than four out of 10 (42 percent) said they simply wanted to treat themselves.

Again, candy has proved to be an inexpensive stress reliever for this decade. It’s a characteristic that shouldn’t be ignored.

So what kind of attributes are consumers looking for when they purchase non-chocolate confections? 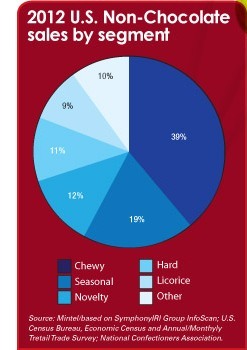 Nearly six of 10 (58 percent) say that real fruit is a key consideration. All natural ingredients are also a consideration, with nearly 45 percent of consumers saying that’s a consideration. Of course, 43 percent also choose low sugar as a key reason for purchasing non-chocolate confections, which certainly seems contradictory to the idea of fulfilling a sweet craving. But then, whoever said consumers act or even think rationally?

Where lies ahead for the category? Mintel’s researchers see moderate growth — 15 percent during the coming five years — and possible concerns, such as lower-priced private label offerings, health and wellness issues and rising commodity costs.

Clearly, innovation remains the X factor in spurring growth within this segment. But then that also applies to chocolate and gum as well, both domestically and abroad. Be it East or West, confectioners that roll up their sleeves and open their minds have ample opportunities for success.