They say good things come to those who wait. Sometimes yes, and sometimes no. For Will Ralston, the opportunity to purchase a second-generation chocolate business seemed to have come and gone twice.

Ralston, who was vacationing with his wife Celeste in the Blue Ridge Mountains of western North Carolina near Ashville, opted to visit a couple of chocolate shops in the area. Both were interested in running a chocolate shop, but it was Celeste’s idea to see if one of the two shops, Downtown Chocolates in Brevard and Van’s Chocolates in Hendersonville, was for sale. Turned out Van’s was.

Unfortunately, by the time he was able to structure a deal and get financing, word came that a previous offer had been accepted. It appeared that the couple’s chances of acquiring Van’s Chocolates from the Vanderlois family had gone up in Appalachian smoke. 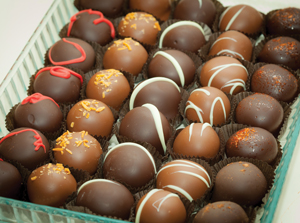 Two months later, however, the broker involved in the sale called. A disagreement about covering inventory costs caused the deal to fall through. But before Ralston could act, “A finance guy intervened and came up with an offer.”

Disappointed, the former general manager of Rockledge, Fla.-based Grimaldi Candies thought he would have to renew his search again. Time passed, but come October 2014, Ralston received a phone call; seems the original buyer’s bid fizzled at the last minute.

“The broker asked if I was still interested,” Ralston says. “Of course, I was.” A subsequent phone call that lasted 45 minutes nailed down a purchase agreement with Peg Vanderlois, the co-founder of the business.  A week later, the sale was consummated.

Today, Ralston continues to build on the legacy that Peg and Russ Vanderlois created when they started the business in 1968. In fact, Peg and Russ’s son, Bryan, continues to work at Van’s as the company’s production manager.

Ralston recognizes the importance of maintaining the quality standard that the Vanderlois family established with Van’s. He’s determined to keep the company’s signature truffles and creams intact, while introducing new variations. He also realizes the need to grow the business.

“We completed an agreement last August with the Biltmore Estate to supply them with chocolates,” he says. “We are also working with Bold Rock Hard Cider and the Tryon International Equestrian Center.”

Seems he’s destined to do so.

If you were stranded on a deserted island with only one kind of candy, what would it be?

What was the last cool thing you saw online?

When you were little, what did you want to be when you grew up?

What issues concern you most about the confectionery industry and why?

What is your pet peeve?

When people come in to apply for a job and ask for a pen. SERIOUSLY!?!?!?

If given the chance to choose anyone, whom would you like to collaborate with?

What’s the best piece of advice you’ve ever received?

Phil Holtje, co-owner of Grimaldi Candies, told me that cash flow conservation is key to running a business.

What excites you most about your job?

Being able to provide jobs to great people.