This website requires certain cookies to work and uses other cookies to help you have the best experience. By visiting this website, certain cookies have already been set, which you may delete and block. By closing this message or continuing to use our site, you agree to the use of cookies. Visit our updated privacy and cookie policy to learn more.
Snack ProductsCandy IndustryBarsCandy ProductsCandy IngredientsCandy Industry TrendsNew Candy ProductsChocolate ProductsGums & MintsNovelty CandiesCannabis CandyFunctional Ingredients in CandyCandy Industry News

I recently got the chance to walk the halls of the largest candy show in the world — ISM. The event, which is held in Cologne, Germany, offers the chance for attendees to see the newest confectionery and snack products from all over the globe. Below is a look at some of the more interesting products I saw at the show, and how they may start to impact trends in the United States. 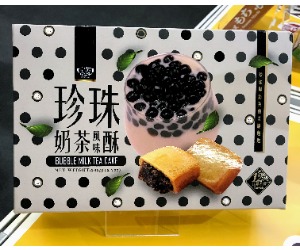 Bubble Tea is the hot new trend these days, but I had no idea it could also be used in snack products.

According to Wikipedia, Bubble Tea is “a Taiwanese tea-based drink invented in Tainan and Taichung in the 1980s. Recipes contain tea of some kind, flavors of milk, and sugar (optional). Toppings, known as "pearls", such as chewy tapioca balls (also known as pearls or boba), popping boba, fruit jelly, grass jelly, agar jelly, alovera jelly, sago and puddings are often added. Ice-blended versions are frozen and put into a blender, resulting in a slushy consistency.”

So when I saw Bubble Milk Tea Cake by a Taiwanese company called Royal Family Food Co., I knew I had to try. And I have to tell you, it was shockingly delicious.

It’s times like these when I’m so grateful that I get the opportunity to try products from all over the world. And I can only hope that the company’s products are available throughout the United States soon. 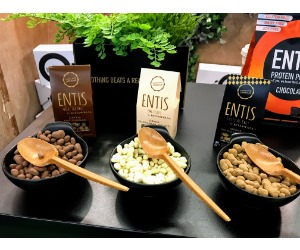 Candy Industry has been covering candy insects for a few years now, including in this piece I wrote in 2014. However, I had yet to take the leap and actually put one in my mouth.

So when I saw the ENTIS stand at ISM I knew what I had to do. The display featured three chocolate-covered cricket options: Milk, dark and white chocolate. After nervously watching another attendee put the milk chocolate-covered cricket in his mouth without dying, I gathered all my courage and ate one. So how did they taste? Honestly, mostly just like a piece of chocolate. I couldn’t even tell that I had just eaten a bug.

The company also offered protein bites made with cricket flour, and I tried those as well. Again, if they hadn’t told me they were made from crickets, I never would have known.

The products go beyond novelty though. ENTIS says they are also better for the environment, saying, “Cricket farming produces up to 98 percent less greenhouse gases than traditional livestock farming and requires less water, less space, less everything.”

But will American consumers ever actually be interested in chocolate-covered crickets? If it’s going to happen it’s probably going to be via companies making products like this — where you can’t even tell there’s an insect involved. 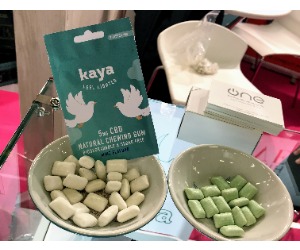 CBD is obviously finding its way into the global market, but this gum, sold under the brand name Kaya, was especially interesting to me. First, it’s made without a traditional gum base, so it disintegrates within a few weeks if left outside.

But it’s also interesting for another reason. It’s made by a French company called Rainbow, which uses a CBD supplier from the U.S. However, they only sell it in the UK because they can’t sell CBD gum in France. It offers an interesting look at the ways companies are trying to be a part of the growing cannabis sector.

I tried a piece at the show, and I couldn’t tell it wasn’t made with a traditional gum base. As for the CBD, it didn’t really offer any noticeable impact, but I was in a very good mood after chewing it. I’m not sure how much of that was the CBD and how much of it was the fact that I was at the largest candy show in the world. I’m guessing it was a little bit of both.

So what cool products did you see at ISM this year? We’d love to hear about your favorites in the comments below!