Rob Auerbach explains why it’s so hard to sell novelty candy on the day of love.

Valentine’s Day is just one problem after another.

First, there’s the fact that it can land on any random day of the week. And candy sales just aren’t the same on a Wednesday as they are on a Saturday.

There’s also the issue of traffic — the holiday just doesn’t lend itself to more people walking through the stores. Not many people are going through the grocery aisles stocking up for their family Valentine’s Day party.

Then, on Feb. 15, well, anything with a heart on it just doesn’t sell. At all. There’s just this huge drop off.

Oh, and, of course, there’s the potential for weather problems. Say there’s a snowstorm in the northeast. Suddenly a third of the country isn’t going out to the store to get Valentine’s Day gifts.

At least that’s the way Rob Auerbach, president of Candyrific, sees it.

As the head of the one the world’s largest novelty companies, he knows the limits inherent on the day of love.

“It comes on the heels of Christmas; it’s sort of like the first dip back in the pool,” he explains. “Not every retailer is committed to Valentine’s Days. Some don’t even bother.”

Of course, even if the holiday didn’t have all those things working against it, Auerbach would still have an uphill battle to climb to sell $5 novelty items on Valentine’s Days.

“The husband and wives are going to do a $40 box of chocolates and flowers,” he explains. “We’re going more for the impulse purchase. The ‘I’m going to get my professor in college this, or my neighbor or my friend that. It’s not the heavy-duty romantic.”

So the good news is, at least there is a small market for novelty candy that time of year. And Candyrific knows how to sell to it.

The company’s Disney Princess line (decked out in hearts, of course) does well that time of year, as does its M&M’S hearts tins and its non-licensed kissing bears.

And to get them off the shelves, Candyrific creates two- or three-item displays that can go in the center of the aisle — literally hoping customers will run into the candy.

“For Valentine’s Day, you’ve got to really say, less is more,” Auerbach says. “If you have 15 items or six items, you’re still going to sell the same amount of product.”

The good news for Auerbach is that the holiday right after the day of love is Easter, and Candyrific does great at Easter. Overall store traffic is usually up, because lots of families are hosting Easter brunch. The holiday translates well internationally. And best of all, products don’t even have to be seasonal to make it into Easter baskets.

“Last year, we did a Star Wars [candy] at all the Walmarts,” Auerbach says. ”There’s nothing physically Easter around Star Wars, but it’s in the Easter set, there’s a lot of traffic going through, a mom says, ‘I know my kid loves Star Wars, hey, I’ll throw that in instead of a bunny rabbit.’”

“At first you think it has to be dead-on Easter to sell,” he explains. “It doesn’t have to be. It just has to be topical.”

That doesn’t mean the company doesn’t get into the spirit of things though. Candyrific makes everything from their Mickey and Minnie Helicopters with Easter graphics on them to M&M’S with bunny ears for the holiday. 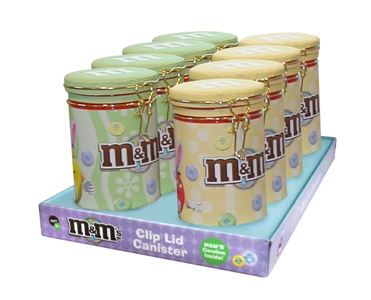 “Easter has grown a lot for us,” Auerbach says.

Of course, there is one issue with Easter — because the religious holiday is based on the cycle of the moon, the date changes every year.

“The pattern is, that most people wait until the last two weeks,” Auerbach says. “So, the two-week shopper, if Easter was in August, they still wouldn’t buy until that last two weeks. That’s just how they roll.”

But there’s a whole other group of people who like to get things done early, and who might be tempted to grab some Easter candy as they walk past it in the store. Because of that, Auerbach says many retail buyers will tend to stock up on more Easter candy when they know they’ve got a couple extra weeks to sell it.

“In general, the longer the season, the better for all of us,” Auerbach says.

The key for retailers is to embrace the holiday, no matter what season it is.

“The smart retailers want to give people a reason to shop, and they spend their time and energy to make it fresh,” Auerbach says. “You sort of get what you put out.”

He points to Walgreens as an example of a store that really sets the bar for seasonal candy.

“You get people saying, year after year, I need to get my Easter together. I need to go to Walgreens,” he says. “The retailers that really make an effort become a destination.”