Chewy Confection celebrating its heritage as a WW I ration bar.

GOLDENBERG’S PEANUT CHEWS is supporting troops and military families with a special promotion and donation during the month of May. 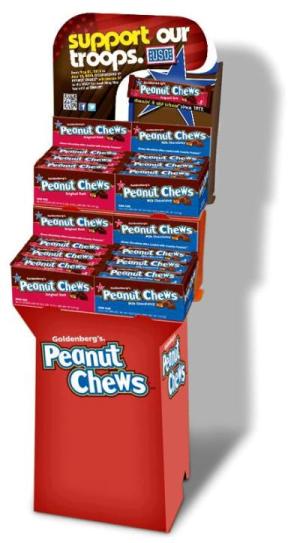 The candy maker says it will donate up to $10,000 to the USO (United Service Organizations) with in-store promotions during May.

Shoppers will be able to find special USO-branded displays at Wawa, Walmart, Mid-Atlantic Military Base Stores, and other regional locations, and Goldenberg Candy Co. will donate $0.05 of each King Size bar sold during this timeframe.

The donation will help provide critical and morale-boosting programs and services that help U.S. troops and their families stay connected during deployments, heal with honor after injury, and transition into civilian life once they return home.

GOLDENBERG’S PEANUT CHEWS candies have a long history with the U.S. military, having been developed by the Goldenberg family in 1917 as a war ration for troops serving during World War I.  The delicious, high energy bar became wildly popular and has been in demand ever since.

Currently, the brand is “Chewin’ It Old School” with a robust advertising campaign tying the brand to its nostalgic roots, including TV, online ads, billboards, video-grams, contests and events in the tri-state area.  Consumer engagement extends online as well with a series of promotions under the heading #OldSchoolNutty for followers of its Facebook page atfacebook.com/PeanutChewsCandy.

These online elements can be a great way to connect with loved ones currently serving in the military, whether domestic or overseas, the company says.

“After 97 years, it is appropriate and humbling that the GOLDENBERG’S brand continues to support our military heroes through this partnership with the USO,” says  Bob Zender, marketing manager for the candy. “We are proud to have been created as a rations bar to help feed the GI’s during WWI, and our service men and women still deserve the gratitude of our nation today.”

Goldenberg Candy Co. is a division of Just Born Quality Confections, the makers of PEEPS, MIKE AND IKE and HOT TAMALES.  Just Born bought the company in 2003, and has continued the delicious candy making tradition started by the Goldenberg family almost a century ago.

GOLDENBERG’S PEANUT CHEWS are still manufactured in Philadelphia, as they have been since 1917. The candy is kosher and gluten-free, and the Original Dark flavor is vegan-friendly.

The USO lifts the spirits of America’s troops and their families millions of times each year at hundreds of places worldwide. It provides a touch of home through centers at airports and military bases in the U.S. and abroad, top quality entertainment and innovative programs and services.

KEYWORDS: Candy for a cause peanut