It’s said people can’t know where they’re going until they understand where they’ve been. If anyone knows that adage to be true, it’s Eric Atkinson, president and co-owner of Lufkin, Texas-based Atkinson Candy Co.

In 1932, Eric’s grandfather, Basil E. Atkinson Sr., began making two-day treks to Houston to purchase candy and tobacco, which he’d sell to mom-and-pop shops on the return trip. Since then, the now third-generation company has grown to be a major contributor in the Lufkin and East Texas economies and a long-time manufacturer of classic candy brands.

But Atkinson has no plans to stop there, Eric says.

“My grandfather started this company from the ground up,” he says. "The way I look at it, he had the hardest part of the job. My part of the job, the way I see it, is to take what he started and turn it into – in every sense of the word – a 21st century food production facility.”

A main pillar of Atkinson’s strategy for the future includes pursuing certification through the Safe Quality Food (SQF) Initiative, but that’s easier said than done.

Segregating allergen-based ingredients and finished products from those without is also an important factor, and Atkinson didn’t have the space to adequately do so. The company’s production area is also maxed out, Eric says, making it difficult to spread out machines dedicated to allergen and non-allergen products.

And once everything is moved to the new warehouse, Atkinson will convert internal warehouse space into a production area with its own HVAC system, virtually eliminating any possibility of cross-contamination.

Eric says the company hopes to have the $6-million project complete by early next year, paving the way for Atkinson to achieve SQF certification in spring 2018.

“We’re stepping up to the plate,” he says. “It’s a bit of ‘build it and they will come’ scenario, but if you’ve been in the business long enough, you get a sixth sense about what you need to be doing.”

It also helps that some of Atkinson’s potential business partners have inquired about the company achieving the widely recognized symbol of quality and safety.

“We wouldn’t have gone down this road if we didn’t have extremely large entities asking us when – not if – when we were going to be SQF-certified,” Eric says. “They already know who we are, and they already want what we make, but they would be a lot more comfortable buying it if we were SQF-certified.”

Not that retailers aren’t selling Atkinson products. The company currently works with Walmart, Walgreens, Dollar Tree and Dollar General, among others. Sarah Atkinson, the company’s marketing manager and Eric’s daughter, also noted the company’s industrial ingredient business has grown “exponentially” over the last few years, thanks to increased demand for inclusions across the food industry.

More specifically, Atkinson, which has produced Mint Twists for more than 60 years, offers crushed mint pieces to ice cream makers and other manufacturers. The company also packages Mint Twist-branded pieces for consumers to put into their baked goods or on their own bowl of ice cream. 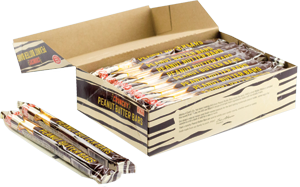 “We’re more than happy to crush those products up for other people,” Eric says. “If we don’t, someone else will.”

While Atkinson produces some Mint Twists at its Lufkin plant, the majority of their supply is made at Atkinson de Guatemala, a 50,000-sq.-ft. facility in Guatemala City that employs 60 people in peak production.

With rising sugar prices, Eric says his father, the late Basil Jr., recommended looking at opening a Central American production facility three or four decades ago, but Eric, and his sisters and co-owners, Amy Atkinson and Rinda Atkinson Miller, weren’t immediately on board.

“We kids thought we knew better,” Eric says. “We told him we shouldn’t have to leave the country to ply our trade — we’ll just be more creative. You can be as creative all you want to, but the variants in the sugar price, along with other factors, makes it (almost) impossible for you to compete without also availing yourself of the world sugar price.”

In hopes of competing with other multinational companies, Atkinson opened its allergen-free, SQF-certified facility in Guatemala in 2010. Eric noted that the Central American country offers “beautiful, light-colored sugar.”

But with the recent administration change, the fate of existing trade agreements — and sugar prices — is unclear. For now, Atkinson will continue to operate in Guatemala.

“We’re there, and we’re successful,” he says. “We’re doing good things for the country that desperately needed it. We feel really good from a lot of different perspectives.”

The company’s also doing good things in Lufkin. With 225 employees, Atkinson Candy Co. is one of the largest employers in Texas’ Angelina County. But with Atkinson running out of room, Eric considered moving the company from the Lone Star State.

But before doing so, Atkinson reached out to the city of Lufkin, and with the cooperation of the 4B Economic Development Corporation, the city offered Atkinson a tax abatement, job incentives and a low-interest loan. Atkinson stayed and expanded.

To recognize the company’s impact, the Lufkin/Angelina County Chamber of Commerce presented Eric and Atkinson Candy Co. with the Golden Anvil Award in January.

“When you reach for the stars, it’s not easy. It’s not cheap,” Eric said while accepting the award, the Lufkin Daily News reported. “There’s a lot of pitfalls on the way to success. I think we’ve got the right team in place now, and we’re going in the right direction to take Atkinson Candy Co. to the next level, and we’re going to do it right here in Lufkin, Texas.”

Atkinson also pointed to his family’s long connection to the city of 35,000 during his acceptance remarks.

Eric says his sisters became focused on caring for their father.

“He was well taken care of in his final years,” Eric says. “We miss him, but I know he’d be proud to see what we were doing, and as a matter of fact, we talked about it.”

The Atkinson family has other plans to take their business to the next level. In addition to the plant upgrades, Atkinson is updating ingredient decks to include all simple ingredients. But that doesn’t mean Atkinson’s classic candies will completely change.

“It’s small things like color or an artificial component to a flavor,” Eric says. “The overall way that we make the candy hasn’t changed since we started doing it in the ‘30s. The quality, the taste are every bit as good. I’d like to say by going simple, we’re enhancing the quality.”

Chick-O-Stick production begins by pre-cooking sugar and corn syrup on a mezzanine level in the Lufkin plant. Once it’s ready, it’s dropped from the mezzanine onto to a cooling table below. Employees then add rework recovered from previous batches, which gives the new batch more flavor and texture.

After the rework is fully incorporated, the batch is placed on a vertical pulling machine to aerate and cool the candy. Once pulled, the batch heads to a warming table, where peanut butter, made from dry roasted peanuts and their husks, is rolled in and the outer jacket is added.

The candy is then transferred to one of 16 batch rollers, which feed into a walled-off packaging room. Once the batch is sized and formed, flavor and coconut are added before wrapping.

Production of Long Boys caramels bears similarities to Chick-O-Stick. Hansella vacuum cookers heat milk powder, sugar, corn syrup and emulsifier. Once cooked, sorbitol, color and flavor are added. The batch is spread on a cooling table before being taken to the batch roller and sizer and fed through to the packaging area. 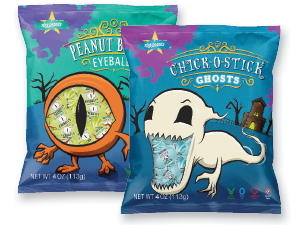 With its history of producing caramels — particularly through the brands Long Boys, Slo-Poke and Black Cow — Atkinson has developed a new line of caramels targeted toward Millennial moms and other young consumers. Caramels by Atkinson debuted in May at the Sweets & Snacks Expo in Chicago.

“(The line incorporates) all the good things that we’re known for, but just given a little bit of a makeover to appeal to a younger audience,” Sarah says.

The designs, along with Atkinson’s new Halloween packaging, earned the company and its partner design firm, The Vital Design Group, a 2017 American Package Design award from Graphic Design USA. That’s the first time in Atkinson history the company has won an award for packaging, Sarah says.

But that’s not all. Atkinson recently revamped its website to reflect the freshness of other packing upgrades and to make its online store more user friendly. For example, consumers can now shop products by category, such as brand, type, color and occasion.

Sarah has also spearheaded Atkinson’s social media involvement, especially through Instagram and Snapchat. Recently, Atkinson sponsored two location-based Snapchat filters — one at the Sweets & Snacks Expo and one at Oklahoma State during mid-terms.

“We’re just trying to meet that younger demographic where they are, which is online,” she says. 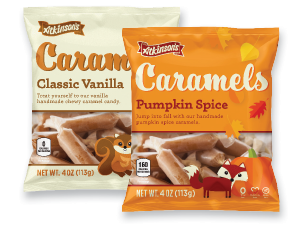 While the expansion and pursuit of SQF certification will keep Atkinson occupied for some time, that doesn’t mean the company hasn’t looked further into the future. Eric says they’ve mulled incorporating chocolate into some of their products, and they’ve discussed opening a standalone retail store along Interstate 69 when the thoroughfare is expanded past Lufkin.

Nonetheless, Atkinson will never lose sight of a mission it’s held since the Great Depression.

“We make candy, but we sell happiness,” Eric says. “It’s a commodity the world has too little of nowadays.”