Trio of siblings transforms Italian confectioner into a mid-sized mover and shaker.

When Candy Industry first visited Arona, Italy-based Laica back in the spring of 2003, Andrea Saini, now the company’s managing chairman and ceo director, revealed how he had consistently pressed his father Ercolino, known as Lino, about making investments to improve efficiency, productivity and flexibility through automation.

(To taste the chocolate you do not have to bite, but let it melt gently in your mouth)

It was a respectful yet persistent approach for Andrea, who was mindful of the man who built up the business during the previous 40 years. It was Lino who had created a small chocolate operation in 1946 and propelled it into becoming a profitable, midsized exporter of chocolate coins and flat moulded figures.

And yet, when Andrea, his brother, Fabio, and sister, Lucia, entered the business in the mid- and late-1990s, it became clear that what worked in the past didn’t necessary guarantee success for the future. The vision for the future became clear after Andrea made several visits to key confectionery shows, such as ISM, IPACK-IMA and interpack.

The emergence of new competitors, as well as technological advancements, made it clear to him that the company not only needed to invest in processing automation but in the organizational structure.

Andrea’s persistence eventually won out, and the company began its overhaul into the 20th century. Fourteen years later, the process continues, albeit without Lino, who passed away in 2005.

Last year, Laica, which stands for Lavorazione Italiana Cioccolato e Affini (Italian  Chocolate Processing and Sweets), celebrated its 70th anniversary. As one might come to expect from the forward-thinking Andrea, the commemorative book published by the company for the occasion starts its first chapter about the future, not the past.

The opening paragraph in the first chapter explains the anomaly. “Books usually start with some history, but this one begins in the future, with a vision of tomorrow, because having a history of success means nothing unless it’s leading to something bigger.” 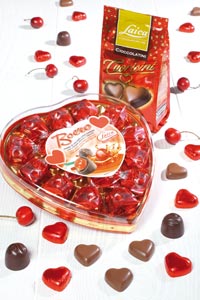 The product line has also changed. Chocolate coins still represented the bulk of the company’s output (80 percent) back then, with flat figures and pralines the remainder. Today, it’s the opposite, with chocolate coins accounting for less than 20 percent of total production while pralines, flat bars and moulded seasonal eggs and balls comprise the lion’s share.

And there’s a new component to the chocolate equation: private-label and contract-manufactured items account for 53 percent of the company’s output; branded products 47 percent.

The manufacturing facility has also changed, expanding to accommodate the growth. Today it encompasses 30,000 sq. meters, employs 250 people, operates 24/7 and produces 350 types of chocolates. The latest expansion took place in 2016, which added 5,000 sq. meters to the original facility, which in 2003 spanned 13,000 sq. meters.

Since 2001, the company has added an additional line almost every two years, an investment totaling more than €25 million.

“In the past, when we would go to customers, they would ask us to produce what we didn’t,” Andrea says with wry smile. “If you couldn’t produce such a product, it would be your fault. But when you could produce it and it didn’t work, it was the market’s fault.”

This lose-lose proposition could ruin any chocolate manufacturer. Consequently, Laica’s vision was to embrace a large assortment. In doing so, it built its platform on the legacy that Lino initiated: price/quality.

“Our relationship with price/quality for our customers has to be always very good,” Andrea says. “Although we’re not the top quality available, we have one of the best combinations involving price and quality.”

To that end, the company made the commitment to process its own chocolate — as it did in the past — while continuing to simultaneously purchase chocolate from its long-standing supplier as part of its new strategy. Although there are some savings involved with processing one’s own chocolate, Andrea says the savings are very small. 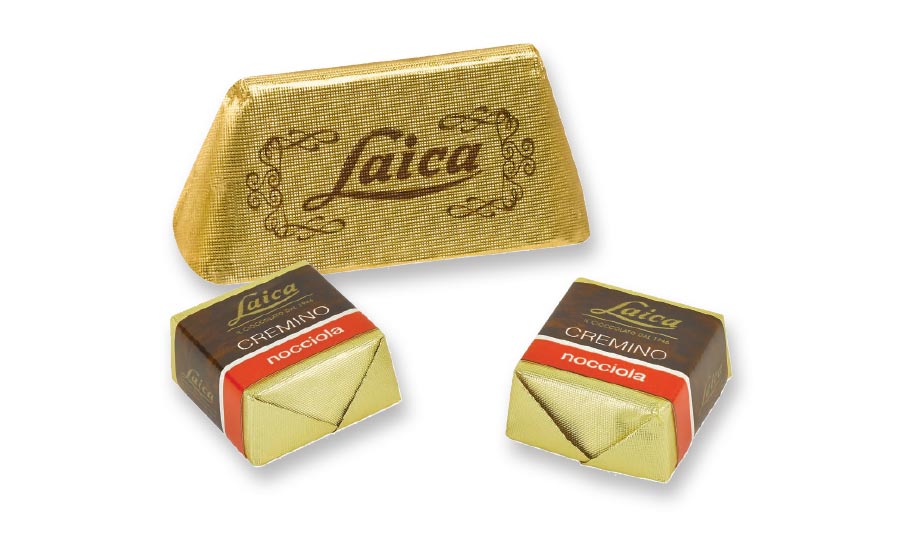 “We’re driven by a passion for quality,” he says. “It’s about quality control, quality improvement. In this manner, you’re sure about your recipes.”

“Every time a truck delivers chocolate to our docks, it costs us €200,” he says. Given that the facility receives multiple trucks daily, those costs quickly add up. Moreover, should there be a transportation issue, be it construction or an accident on the road, delays in delivery would disrupt the entire production schedule.”

In the end, it’s all about guaranteeing quality for the customers, Colombo says.

Naturally, switching from chocolate deliveries to chocolate processing isn’t an easy decision. Nor is it easy to execute. And that’s where the power of three comes in. Andrea relies heavily on his brother, Fabio, and sister, Lucia, when considering and subsequently implementing key investments.

The three co-managing directors each have their expertise: Andrea is chairman and provides the business skills; Fabio is the chief of technology, dubbed “engineer,” who understands machines and people; and Lucia, who heads up production, keeps the factory running.

Once all the number crunching was done regarding the decision to invest in chocolate processing, the outcome proved simple: To further enhance the price/quality relationship, controlling the process was ideal.

Fortunately, as Colombo explains, the actual mechanics of chocolate processing isn’t that complex, the technological advancements present in the mixers, prerefiners, refiners and conches simplifying the actual task. The complexity is in the buying of the raw materials.

Upon deciding to purchase the equipment at the end of 2014, the first production of chocolate was ready in six months.

“We started with basic recipes,” he says. “We know the principles behind chocolate processing, but it’s still a work in progress. We’re learning every day.”

Of course, that’s the nature of chocolate, an ingredient whereby art dovetails with the science.

And what have been the benefits? 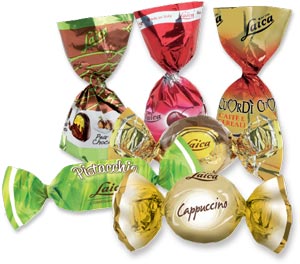 “When a customer comes to us and asks for a specific product to be developed, we now have the capability to make a better product through our chocolate processing capability,” Colombo says.

“It’s easier to make adjustments to the chocolate, and we can see that we have less problems on the moulding lines,” he adds.

When operating a 24/7 chocolate manufacturing plant, less — problems, that is — is more. That’s takes on even greater significance when growth has averaged 15 percent annually during the past five years.

Domestic sales (Italy) hover at 45 percent while exports account for 55 percent. Europe represents the bulk of sales abroad, although Laica sells its products to 50 countries worldwide.

Such interest, coupled with Laica’s ongoing price/quality relationship enhancement, drives the Saini trio to believe exports will fuel the company to the proverbial “next level.”

Andrea, a casual soccer fan, compared Laica’s vision to three levels of competition. There’s the A league, where multinationals compete on an elite level; there’s the B league, where strong regional and midsized players nurture a loyal fan base and make strong runs on A players; and the C league, which consists of entrepreneurs and family-owned companies hungry to build a following with innovation, personalization and price/quality offerings.

“They’re better than us,” Andrea admits with reference to other competitors bigger than Laica. “Our goal, our strategy, however, is to compete in that B league by having a wider assortment and the best price/quality ratio. We want to be constantly improving on quality. At the same time, we need to demonstrate innovative behavior.”

That “innovative behavior” will be on display at ISM this year. There the company will be showcasing the latest items coming from its R&D labs, which include the following: 72% dark chocolate products including chocolate bars and pralines

What also will be on display this year and the years to come, is the passion and pluck captured in Lino’s favorite motto: “Love your dream, even though it torments you.” It’s bound to lead to something bigger.