Noting that not everyone gets to Savannah, Ga., to visit River Street Sweets or Savannah’s Candy Kitchen, Tim Strickland, co-owner of the recently created River Street Sweets•Savannah’s Candy Kitchen franchise operation, says you can just put a packaged praline from either one of the retail shops in the microwave for 10 seconds or more and nearly get the same result. 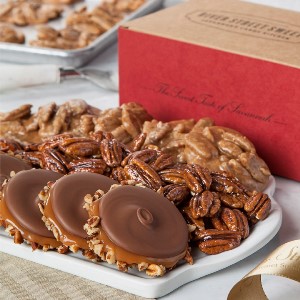 Seems the people of Savannah and an ever growing segment of the South agree. The franchise organization, which was launched last year, bases its business plan on a concept going back to 1973. It’s a plan that’s been tested through two retail candy store chains that today comprise 17 stores and joint revenues exceeding $30 million.

Sound a bit complicated? Not really, if you just remember that it all revolves around the Strickland family. Moreover, it was Tim, son of Pam and Stan Strickland, who was responsible for getting his entrepreneurial parents into the candy business.

In 1973, the Strickland family had opened up a retail gift shop dubbed the Cotton Bale on River Street, which at the time was still an industrial-looking area on Savannah’s waterfront. The fledgling storefront had a variety of knickknacks for sale to tourists. Intent on finding some additional items to offer customers, Tim’s parents had taken the family to the Atlanta Gift Market show to find some merchandise.

As Jennifer Strickland, Tim’s sister and co-owner, remembers, it was Tim, 11 at the time and prone to exploring, who wandered away from the family entourage.About two aisles further off, Tim found the Calico Fudge booth. Upon getting a sample, he quickly ran back to his father and urged him to visit the candy maker. It didn’t take long before the Stricklands were hauling back a fudge pot to Savannah.

The fudge proved to be a strong draw. In fact, within six months, the gift shop had completely converted into a candy shop. But, it was the development of pralines that make the transformation possible. 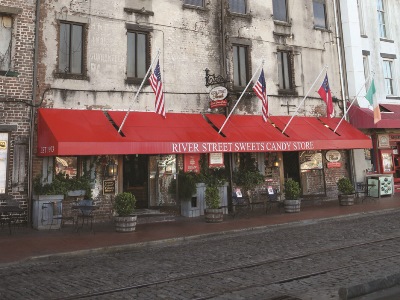 As Jennifer points out, “I was born in Baton Rouge, and my family loved to eat. My grandmother spent a lot of time in New Orleans, so there was that connection. In addition, we’d have one customer that would come in daily to purchase one packaged praline that we sourced for the shop. It led us to think we should do it ourselves.”

Tim recalls he and his sister trying out recipes made on the kitchen stove by his father in 1-lb. Batches. Eventually, one recipe won out — and it’s still the same one that’s being used today.

“Dad then went out and bought a 4-in. Thick piece of marble from a gravestone supplier in town and we started making pralines in the store,” Jennifer says. “They immediately became a big hit.”

The business continued to grow until 1990, when Pam and Stan divorced. After the divorce, Stan opened up his own candy shop, Savannah’s Candy Kitchen, just a few miles from River Street Sweets, a move that further distanced the family. 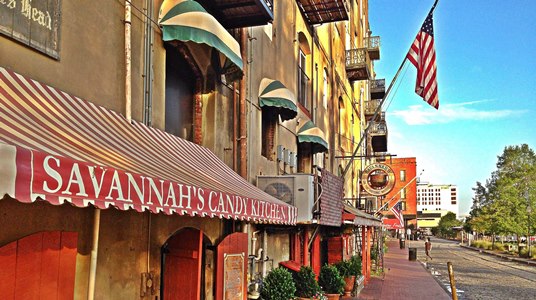 It was at this time that Pam asked Jennifer and Tim to help her manage the business. Having grown up in the business as children, the recent college graduates didn’t hesitate; “Just seemed like the thing to do,” adds Tim.

Ironically, despite being estranged from their father —“Sadly, we didn’t speak to each other,” says Jennifer — the two families’ separate candy shops thrived, each expanding their operations in and outside of Savannah.

It was in 2006 when Jennifer, Tim and Stan began their rapprochement.

“Jennifer and I also own several bars and restaurants,” Tim explains. “It was during the opening of one restaurant that we started talking more.”

As Jennifer says, “All of us were getting older.”

And there was plenty to talk about; after all they were in the same business. Thus, it made sense to share information about pecan pricing, shipping options, everything and anything that could help the two businesses save money.

The cooperation progressed to the point where both groups were beginning to even think alike.

When Jennifer and Tim asked their father’s advice about what he would do differently in setting up a manufacturing facility — they had purchased 14 acres of land and were considering a greenfield plant —it became clear that such a facility would cost $3 million to build and equip. During the process, it became obvious that Stan’s preexisting 50,000-sq.-ft. plant could accommodate Jennifer’s and Tim’s needs.

“It took a leap of faith, but we decided to move in together,” says Jennifer. “By joining forces we became stronger together. And we would incorporate the best practices from both.”

With the manufacturing challenge resolved, the trio focused their attention on actual store units, reviewing what looked and worked best. 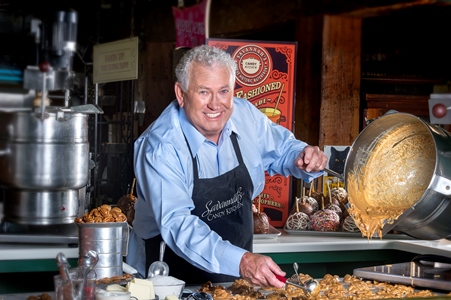 One of the keys, of course, was to having pralines done on site, providing the sights and smells of a freshly made treat to customers.

“We wanted to make the pralines in front of people,” Jennifer says. Moreover, pralines account for nearly one-third of all sales, ranging between 30 to 40 percent. As she points out, “We’re the largest praline producer in the States.”

Aside from pralines, other “Southern” confections that sell well include caramel popcorn, glazed pecans, and taffies. Ice cream and gelato, which are also made on-site, comprise between 10 to 15 percent of sales. Hard candy is also prominently featured since it contributes to 10 percent of sales.

Chocolate-dipped strawberries and handmade marshmallows are another “theatrical” aspect of candy making done in the stores.

Then there are the gift items that line the shelves. “They look delicious,” Jennifer says. Currently, mail-order accounts comprise 35 percent of the two chain’s total revenues.

Moreover, despite the cost of printing mail-order catalogues during the age of the internet, the payback is worth it, says Tim.

“It’s 60 percent internet and 40 percent mail-order,” he adds. “But it’s the mail-order that drives the internet. Every time you shop in one of our stores, you get a brochure placed in your bag.”

Both Jenifer and Tim pay special attention to merchandising, incorporating a nostalgic look hearkening back to the days of Mom-and-Pop candy shops. 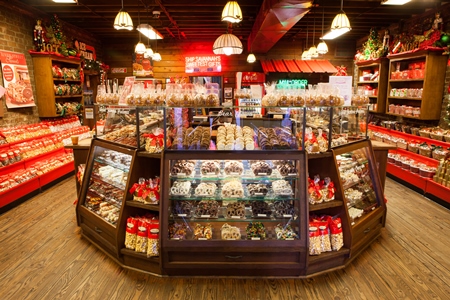 Earlier this year, the company sold its first franchise to Glen Willard, who opened up a shop at Tanger Outlets in Pooler, Ga. The 2,500-sq.-ft. shop represents the first of what Jennifer, Tim and Stan hope will be many more during the next five to seven years.

“We’re hoping to add 10 the first year, then 20 the next couple of years, and then 30,” Tim says. Willard has already indicated he was going to open a second one shortly. The concept has already generated 400 leads for them.

The potential for growth hasn’t escaped the trio. Already, the Stricklands are planning to upgrade to a 15,000-sq.-ft. warehouse on the 14-acre site they had purchased earlier. Plans also call for a new chocolate line to be included in that building a couple of years down the road.

Yet, despite all the goings on, neither Jennifer nor Tim have forgotten their roots. As Jennifer explains, their father determined that when children knew how to read, they were also old enough to make candy.

And while neither she nor Tim have to whip up a batch of pralines at the store anymore, they’re both still experts in the technique. With the growth of the franchises, they may be doing that more often than they think, passing down the art to new confectionery entrepreneurs.