For the first time in five years the candy goes commercial 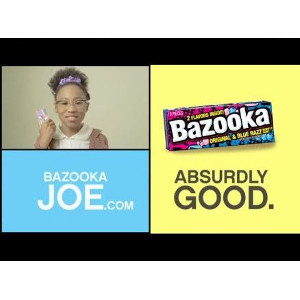 Launched in conjunction with the brand’s new packaging and revamped flavor profile that came out earlier this year, as well as Bazooka’s new broad distribution, the spots feature the gum’s tagline, “Absurdly Good.”

In the advertisements students are seen sneezing sumo wrestlers or cloning yetis in science class — even though the acts are supposed to be impossible. Then, the kids are encouraged to create their own fun, and use their imagination, in the same vein as the activity and brain teaser inserts that come in the gum’s packaging.

Even though Bazooka Bubble Gum is a pop culture icon with a special place in many consumers’ hearts, the brand has not enjoyed broad distribution until now, and the ads are meant to get the word out.

The classic bubble gum is set to make its mark on the shelves of top retailers including Target, Kroger, Winn Dixie, Casey’s, 7-Eleven, Hess, Meijer, Ahold, and Circle K Florida for the very first time.

Amanda Gajdosik is an editorial intern with Candy Industry.