Bringing Out The Salty Side Of Sweets

How does maple pecan buttercrunch with bacon and more pecans drizzled with milk chocolate sound? “It’s incredibly popular,” Amy Tarrant says of her Have Bacon Will Travel salty-sweet snack mix.

Tarrant, co-owner of Too Haute Cowgirls in Carbondale, Colo., says its just one of several flavorful mixes including End of the Trail mix, which has caramel corn in white chocolate mixed with crunchy ginger, orange-spiced granola, almonds, cranberries and banana chips. Her Fistful of Fleur de Sel is a caramel corn in dark chocolate with handmade toffee and sprinkled in sea salt. 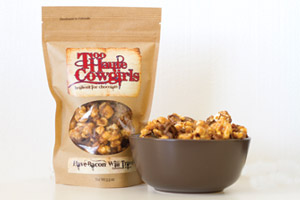 “We know people like chocolate and salt together,” says Tarrant. “Sweet and salty is addictive. People gravitate to it.” She sees a trend toward using “high end, quality ingredients and the consumers’ willingness to pay for increased quality.”

Eric Bertheau, owner of Tropical Valley Foods, agrees that more people are willing to pay for healthy alternatives. His Plattsburgh, N.Y., chocolate manufacturer launched a line of dark chocolate nuts, pretzels and dried fruits called Next by Nature and now have 13 varieties including almonds, walnuts, cashews and Brazil nuts. “This line is quickly becoming very popular,” he says.

“People are really getting in the mood for healthy snack alternatives,” he continues. “The big thing… has always been the price.”

Supermarkets want to offer some of what health food stores, like Whole Foods, offer, but previously had issues with the traditional candy buyer willing to pay the price for healthier snacks. Now though, people are accepting the higher price points because they feel it’s a good value.

Meanwhile, Next by Nature is a followup line to the company’s Next by Organic line, which is sold in high-end health stores. Although there are a number of consumers who will pay more for that proposition, Bertheau says his company wanted to go after the average consumer.

“We wanted to go beyond the hard-core health foods industry into mainstream,” he says. Where Next by Organic sells for $5.40 for a 3-oz. Bag, he notes Next by Nature is a more “value-driven proposition” that can sell for 25 percent less. 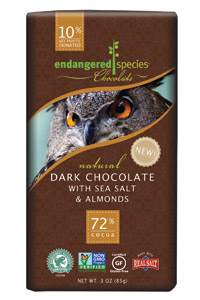 The Indianapolis company has extended its 3-oz. Natural bar line to include a Dark Chocolate Sea Salt and Almond Bar. As one of 14 different flavors in the natural bar line, it’s made with 72 percent cocoa and sea salt that comes from Redmond’s Trading Company’s Real Salt.

“It’s quickly becoming one of our topselling bars,” says Wolting. “Our research and feedback shows that a lot of consumers are looking for products that contain sea salt due to its health advantages, so there definitely is a market for it.”

“It’s an American love,” says Kirsty Ellison, vice president of sales and marketing at Seattle Chocolates, which is why the company has launched several new products using sea salt. Coming this fall under the Truffle Bar line is a Salted Almond bar, 2.5 oz. Of roasted almonds and sea salt in dark chocolate selling for $3.

Then under the company’s jcoco brand, two of the six new premium bars which sell for $7.95 each, are infused with sea salt. Edamame Sea Salt is a milk chocolate bar with whole toasted edamame beans and sea salt.

“It takes an Asian delicacy, and treats it in a uniquely American way by roasting edamame like an almond and adding sea salt,” Ellison says. The Agave Quinoa Sesame, of South American influence, is a puffed quinoa coated with blue agave, a natural sweetener, to seal in the airy crunch mixed with sesame seeds, a dash of sea salt and Vanuatu-origin milk chocolate. Quinoa is a high protein grain.

Ellison says the jcoco brand is a result of the traveling of owner Jean Thompson who wanted “to get (flavor) inspirations and translate them for the American palate.” Because the company cares about portion control, each bar is in an envelope containing three individually wrapped 1-oz. Bars. With each purchase, a serving of healthy food is donated through food banks nationwide. 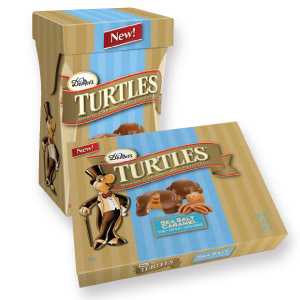 There’s always going to be a market for the sweet and salty.

“For consumers, it hits different taste buds – you get the sweetness up front and salty on the back side, which makes for a more interesting snack,” says DeMet’s Candy Co. Brand Manager Dave Persaud.

DeMet’s has launched Flipz Chocolate Mint covered Pretzels in 4-oz. Stand-up pouches and 9-oz. Canisters in dark chocolate. Persaud says there will be a holiday version, but they wanted this to be in the everyday line up.

The Stamford, Conn., manufacturer also has a new Turtles Sea Salt Caramel variety which adds the sea salt directly to the caramels “to give that extra salty pop,” he says. It’s available in a variety of sizes from 2.9-oz. lay down boxes to 6.4-oz. stand up boxes. “As different brands come up with more savory flavors, we’ve seen a little bit more of an uptick (in sales) overall.”

For those who like salty pretzel bits mixed with peanut butter, Jer’s Chocolate, of Solana Beach, Calif., has added Pretzo Change-O Milk Chocolate Peanut Butter Bars to its line.

Mars Chocolate North America has several new products in this category including, Snickers Bites, unwrapped, bite-sized cubes that are a miniature version of theSnickers Bar, and run $1.49 for 2. 8-oz. bags and $2.99 for 8-oz. Stand-up pouches. “They’re ideal for consumers looking for the full taste experience of a Snickers Bar in a smaller portion, and they’re perfect for snacking, sharing, or most any occasion,” says Tim Quinn, vice president of trade development for Mars Chocolate North America. 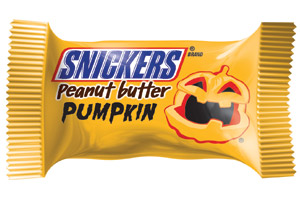 For Christmas, DeMet’s is releasing Flipz Gingerbread covered Pretzels and Flipz Peppermint covered Pretzels “which we think will be a big seller because most people associate ginger with the holidays,” Persaud says.