Review started with complaint from Mars. 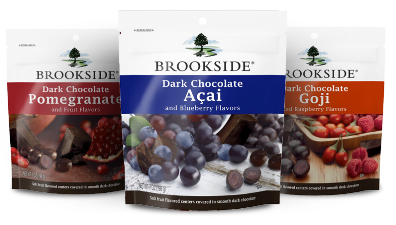 The National Advertising Division (NAD) has recommended that the Hershey Co. change the advertising for its Brookside Chocolate-Covered Candies because, as it stands right now, the ads are misleading.

The goal of changing the ads would be to make it more clear that the products are made with fruit flavors — not actual pieces of fruit. And, the NAD also has recommended that Hershey change the packaging of the product for the same reason.

“Hershey believes in the process of industry self-regulation so we have no issue with working with the NAD whenever there are concerns with our marketing and packaging,” says Hershey spokesperson, Jeff Beckman.

NAD also considered whether the advertising at issue implied:

Initially, the products were sold in packages that included images of fresh fruit, a product name -- “Dark Chocolate Goji with Raspberry,” for example -- and the statement “Natural Source of Flavanol Antioxidants.”

At the outset, Hershey requested that NAD close its inquiry into packaging claims because the packaging had been revised to omit the mention of flavanols and the word “flavor” was added to the end of each product name — i.e. “Dark Chocolate Goji with Raspberry Flavor.”

Hershey asserted in writing that it has permanently discontinued the original product packaging, which the NAD had requested.

In considering Hershey’s position,the  NAD noted that the original packaging was still available in retail outlets at the start of Mars’ challenge and retained jurisdiction.

It didn’t stop there though.

The NAD also found that the layout and font sizes used in the revised packaging could be read in a way that conveyed inaccurate information.

That’s because the name of a single fruit was presented on its own line in much larger font than the word “flavors,” so consumers could reasonably come to believe the product has three distinct parts: dark chocolate, a real piece of the highlighted fruit (acai, goji, or pomegranate), and, separately, other fruit flavors.

NAD recommended that Hershey further modify its packaging to present the product name in a manner that makes it clear that all of the identified fruits are in fact “flavors” and not actual pieces of fruit in the product.

“Although we disagree with NAD’s assessment of the layout, we are taking NAD’s recommendation into account for our latest packaging change because we support industry self-regulation,” Beckman says.

The NAD did decide that, in general, consumers who are told that a product is “flavored” with a particular fruit do not come to think that the product contains an actual piece of that fruit.

Meanwhile, the TV advertising at issue depicted a team of chefs, chopping chocolate and preparing berries and pomegranates in an outdoor kitchen. A voiceover described the products as “[r]ich dark chocolate meets sweet soft centers flavored with exotic fruit juices” The super read: “Flavored with a blend of juice concentrates and fruit flavors.”

The NAD recommended that the advertiser discontinue its television commercial or modify it in a way that would avoid conveying the unsupported message that the products contain real fruit.

But the recommendation came too late.

“The TV ad referenced in the NAD challenge had already run its course and will not be airing in the future,” Beckman explains. “It was replaced by a different spot for 2014.”

Here is the spot the NAD was commenting on: