Research shows which companies run the most seasonal ads.

When it comes to seasonal products, Hershey is in it to win it.

That’s according to data from ECRM Analytics, which was released during the ECRM show in Denver, ECRM Candy Planning: Christmas and Halloween, held Feb. 23-26.

On the manufacturing side of things, The Hershey Co., is followed by Mars Chocolate North America, which has 19.1 percent of the retail ad support, followed by Nestle S.A. with 8.7 percent, and then Russell Stover  with 6.8 percent. 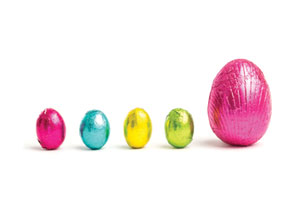 Meanwhile, on the brand side of things, Hershey’s is followed by M&M’S, which has 8.5 percent retail share of the ad support, followed by Russell Stover with 4.8 percent and M&M Mars with 4.7 percent.

Meanwhile, retailers also were ranked as part of the data. CVS ran the most circular ads, followed by Rite Ads, Longs Drug (Hawaii) and then Walgreens.

Click here or the image above to see the full size analytics.