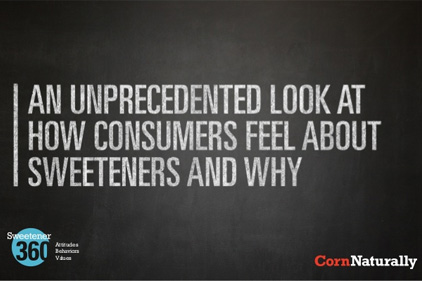 Although consumers claim to avoid certain ingredients — such as sugar or high fructose corn syrup — a new study by Nielsen and Mintel Consulting shows that those claims aren’t usually true.

The second annual Sweetener360 study, commissioned by the Corn Refiners Association, studied 15,000 consumers based on lifestyle segment, age group and media consumption. What it discovered was that although consumers say they avoid specific ingredients, their purchase data does not reflect though claims.

The study made four key conclusions:

1. Consumers' purchase behavior does not match their changing attitudes.

While consumers are becoming more mindful of health and ingredients, their purchase behavior is not changing as a result.

The study follows the six lifestyle segments identified in the 2014 Sweetener360 study, which range from bachelors with health concerns to "all-natural" moms who avoid all sweeteners and GMOs. All segments report greater awareness of health.

In fact, 25.4 percent of consumers claim to avoid total sugars, up from 21 percent in 2014. And the segment claiming to be most mindful of health and wellness has grown four percent to 19 percent, now the largest segment.

Still, every segment continues to buy its fair share of products carrying all types of sweeteners, including sugar, high fructose corn syrup (HFCS) and low or no calorie sweeteners.

More than any other age group, the Millennial segment reports high affinity for foods with "better-for-you" ingredients.

In other words, Millennials buy more than their fair share of sweetened goods.

The study finds that taste and total sugar are more important factors in purchase decisions than individual ingredients.

Many more consumers claim to be more concerned with total sugars than specific types. In fact, 4.3 times as many people express concern for total sugars compared to HFCS.

They also claim to value taste and price over "better-for-you" claims. More than half rate taste as their top purchase driver, while 49 percent rate price second.

"Once again, the Sweetener350 data shows that even when consumers say they're avoiding specific ingredients, purchase behavior shows they don't always act on what they say," says Sara Martens, v.p. of The MSR Group and a Sweetener360 research analyst.

According to the study, mainstream media has driven people to change their attitudes while maintaining their original purchase behavior.

The two consumer segments most likely to say they avoid specific sweeteners are also the two segments that are most likely to stay informed on sweetener news. However, both segments still buy their faire share of products formulated with HFCS.

The takeaway? That what people say is not necessarily what they do, and actions speak louder than words.

"If food and beverage manufacturers want to deliver against true consumer demand, they should base their decisions on purchase data instead of misinformed buzz on what consumers claim to avoid," says Martens.