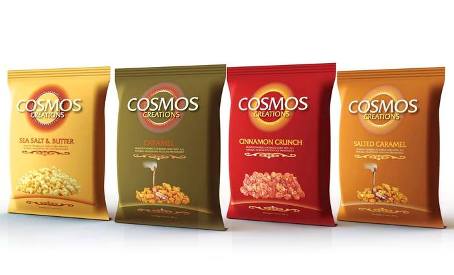 Cosmos Creations, a premium puffed corn company, is announcing the start of construction this summer on its new 135,000-sq.-foot factory expansion.

The larger plant will be built on new land in its current city, Junction City, Ore, and is set to be completed in about two years.

“Junction City has been great to us,” says John Strasheim, ceo of Cosmos Creations. “When we looked to expand our plant, we naturally looked to stay right here.”

At the end of 2014, Cosmos Creations hopes to have a $4 million steel-frame completed on more than 17 acres of land.

“I bought the company from its founders in 2011, when it was called Cosmos Caramel Corn and was only sold primarily at holiday bazaars and fairs,” Strasheim, says. “With the latest Cosmos Creations rebranding, we are excited to keep building this company with the expansion and continue adding new flavors to our sweet and savory lines.”

And, with the new expansion, comes new job creation. Cosmos Creations currently has between 50 to 60 employees at the factory and offices, but with the new factory, there is potential to hire more than 150 workers.

“Our name, 4 Him Food Group, says a lot about who we are and how we do business, we help people,” Strasheim says. “We’re for profit but with this new expansion we will be able to provide jobs, and continue our mission to treat people how we’d like to be treated.”

Cosmos Creations currently distributes its premium puffed corn in the U.S., Canada and various online stores. Along with the new plant expansion, Cosmos Creations has future plans to broaden distribution to be able to ship internationally by the end of 2014 as well as in more national stores by early Fall 2014.

Junction City, Oregon based Cosmos Creations is slowing things down, making the commitment and investment to use only all natural ingredients to create a line of premium puffed corn snacks with an indulgent, artisan taste. For more information on Cosmos Creations please visit:www.CosmosCreations.com.