Confectionery Trends in the United States

Confectionery sales in the United States continued to do fairly well overall in 2011 and 2012, despite some underperforming areas and retail price increases. 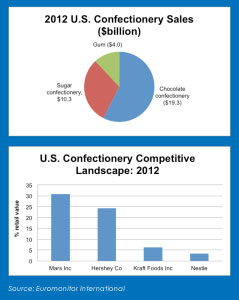 Chocolate continues to do well for itself as consumers become increasingly attracted to premium chocolates, seeing them as an affordable luxury. At the same time, major manufacturers continue to use innovation targeted at younger consumers to drive sales. These consumers of chocolates are increasingly drawn to bold and indulgent flavors, leading many companies to release new varieties of existing brands, such as Mars Inc’s introduction ofSnickers 3X Chocolate.

In addition, many companies are focusing on another snacking aspect important to youthful consumers: convenience. Mars now offers Snickers in “2 to Go” formats, which means consumers can eat one piece and save the other one for later.  Hershey’s also introduced a smaller version of its Rolo brand chocolate with Rolo Minis, which allow for easier on-the-go snacking.

One other consumer group that manufacturers are trying to tap into involves dieters. Hence, the rollout of such products as Hershey’s Simple Pleasures and Nestle’s Skinny Cow Dreamy Cluster, both of which boast lower than average fat or calorie contents.

Traditionally, gum has relied heavily on younger consumers to drive sales since they represent a large portion of the purchasing base. In recent years, however, younger consumers have had less disposable income and an increased apathy towards the activity of chewing gum in general, and this has led to a bit of a decline. To combat this, the major gum companies appear to be going after younger consumers with two different approaches.

In an attempt to capture more price-oriented consumers, Wrigley will continue to push small, but seemingly more affordable five-piece packs of gum for its 5 and Orbit brands. Kraft, however, is attempting to use stylized packaging design with its new ID gum in an attempt to encourage younger people to chew gum again.

Sugar confectionery is performing well, as it appears to be one of the few areas of confectionery that draws on both younger and older consumers. Products such as Sour Patch Kids, Starburst, and Airheads, are doing very well and have traditionally been favorites of young consumers.

At the same time, the emergence of soft-style eating licorice candy, which would include brands such as Darrell Lea, Lucky Country and Natural Vines, has invigorated the category and contributed to growth. This product type largely draws a lot of sales from its black licorice flavor and appears to benefit significantly from older consumers/Baby Boomers who enjoyed black licorice in their youth. That being said, larger established brands such as Twizzlers and Starbursts remain very popular as well.