CEO and Chairman of Tootsie Roll Melvin Gordon dies at 95

Gordon passes away after leading the candy company for 53 years, working a full schedule until his last month. 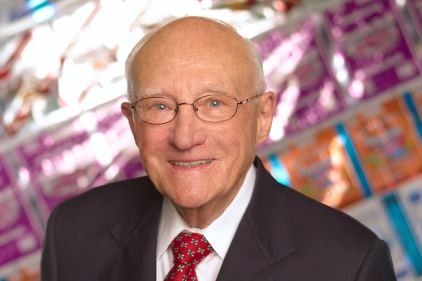 Melvin Gordon, chairman and ceo of Tootsie Roll Industries since 1962, died Tuesday after a brief illness at 95.

The company says Melvin worked a full schedule until last month. His wife of 65 years, Ellen, who served as Tootsie Roll’s previous president and chief operating officer, has been named his successor.

Tootsie Roll began in 1896, named after founder Leo Hirshfield’s five-year-old daughter. It listed on the New York Stock Exchange in 1922 and took off in the 1970s under Melvin’s leadership.

The company acquired Mason and Bonomo, maker of Dots gumdrops, in the 1970s, followed by Charms, maker of Blow Pops, in the 1980s. In the 1990s, it bought the Sugar Daddy’s and Junior Mints brands and added Andes Chocolate Mints and Dubble Bubble to its profile in the early 2000s.

In 1970, Tootsie Roll launched a hugely popular television commercial that became a staple in the company’s branding: “How many licks does it take to get to the center of a Tootsie Pop?” Since then, the company says, it has received 20,000 letters from children who set out to solve the question.

Today, the company produces 64 million Tootsie Rolls in a day.

In 2009, Melvin won Candy Industry Magazine’s Kettle Award, making the Gordons the first husband-and-wife pair to win the award individually (Ellen was the 1985 recipient) and earning them the title of “Kettle’s First Couple.”

At 89, Melvin was the oldest recipient of the award, reminding everyone that wisdom and experience do pay off. But he refused to make the night all about himself, insisting that, thrilled as he was to receive the honor, he was even more excited when his wife Ellen won the award.

Melvin described the two of them as “Mr. Inside” and “Ms. Outside,” referring to the Army All-American running back duo Doc Blanchard and Glenn Davis.

“We’ve worked together for so many years that either one of us can come in and take over a project for the other,” Ellen explained at the time. “We do a lot of handing off to each other.”

The pair ran Tootsie Roll as a team.

While Melvin’s experience in operations and streamlining productions turned the company into a “value house” of efficient production, technology and automation, Ellen’s background in new product development, investments and treasury let her understand the importance of creating a confection that caters to a particular consumer need.

But it was never just about the present. “We have a long-term strategy,” Ellen told Candy Industry Magazine back in 2009. “It’s not just about the next quarter or the quarter after. We want to ensure the integrity of the brand for many years. We certainly don’t want to sacrifice long-term growth for any immediate short-term profit-taking.”

And although investors are now eyeing the company as a potential takeover candidate, back then, the Gordons seemed confident in Tootsie Roll’s future in the hands of their four daughters.

“Our daughters are all professionals, several owning their own businesses,” Melvin said back then. “They are all well-educated, having gone to either business, engineering or medical schools, all of them obtaining advanced degrees. Plus, two of our grandchildren have already worked here.”

In any case, as Ellen has reminded Candy Industry Magazine before, she comes from a family that never retires. So although she no longer has her long-time partner and mentor Mr. Inside, Ms. Outside will no doubt continue to thrive.