Skittles to pay Lynch for bringing Super Bowl XLVIII a ‘Taste of the Rainbow’. 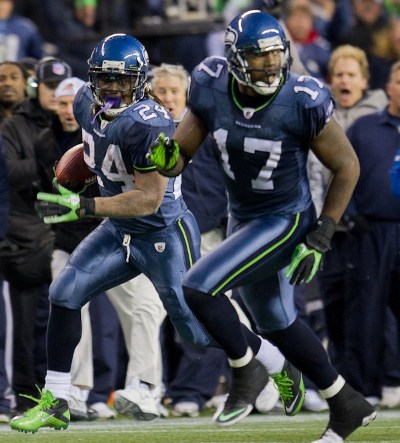 Looks like Seattle Seahawks running back Marshawn Lynch has finally reached the pot of gold at the rainbow’s end. And winning the Super Bowl is no longer his only motivation for scoring touchdowns.

Skittles has agreed to a formal deal with the player in honor of his renowned love for the candy dating back to his middle school years.

The brand will donate $10, 000 to Lynch’s Fam First Foundation for every touchdown he scores in Sunday’s Super Bowl. And while specifics regarding the deal are unknown, ESPN reports that Lynch will receive financial compensation as well.

This would mark the first time Skittles has paid an athlete according to the ESPN report.

Skittles is also auctioning off “Seattle Mix,” a limited-edition flavor mix (not available in stores) featuring the team’s iconic blue and green colors. Three lucky fans will have the chance to win packs of Skittles “Seattle Mix” along with one-of-a-kind football-inspired Skittles-covered items through an online auction beginning today.

It doesn’t end there.

It’s about time some form of endorsement is in the works, considering what Lynch has done for Skittles.

AdAge Media News reports that Lynch’s love for the candy was slated to result in up to $5 million dollars in free exposure for the brand during the Super Bowl, according to research from Kantar Media.

Over the past few seasons it’s become routine for Lynch fans to celebrate his touchdowns by showering the CenturyLink field end zone with the popular candy brand. Fox cameras captured the celebration during a Jan. 11 game.

According to a 2012 report by Seahawks.com, the tradition took off when it caught national attention during the 2011-2012 NFL season. Lynch’s tendency to chew Skittles on the sidelines was recorded by TV cameras during prime time games against the Philadelphia Eagles and the St. Louis Rams, the site reports.

In response to his two touchdowns against the Eagles and one score against the Rams, energized fans congratulated him by tossing Skittles onto the field.

The $5 million figure was reached through a model based off of camera time and mentions of Skittles by broadcasters during the Seahawks’ game against the New Orleans Saints on Jan. 11, according to the AdAge report.

The figure, decided by Kantar Media’s Sports measurement software, is also based on an assumption that a short segment about Lynch’s fondness of the candy will run.

Lynch’s connection with Skittles dates back much farther than his NFL career and the candy was not initially a reward for scoring, said his mother, Delisa Lynch, in a 2012 interview with Seahawks.com. They were actually incorporated into Ms. Lynch’s pep talks to her son.

“When Marshawn was 12 or 13, we’d go to his games and I’d always have little candies in my purse. Before the game, I would say, ‘Here Marshawn, come and get you power pellets,”’ she said.

There’s no sign of the craze calming, with a Seahawks fan recently spotted dressed up as a package of Skittles and a Lynch inspired ‘Beast Burger’ now being served with a side of fries and Skittles at home games.

One can only imagine what the running back’s relationship with candy will mean for the brand come Super Bowl Sunday.

If Lynch can pull off just one touchdown, one thing’s for sure — Super Bowl viewers will surely be seeing rainbows.