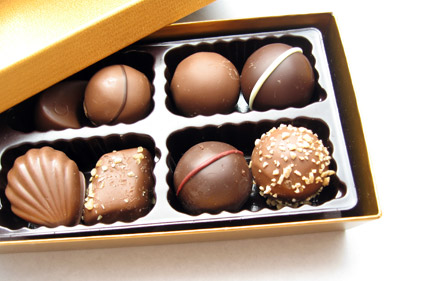 Here’s some news to file under “obvious” — people in the United States love chocolate. In fact, they loved it $19.5 billion worth in 2011.

That’s according to Chocolate Candy in the U.S., a just-released report from Packaged Facts, which says retail chocolate sales are up 6.6% compared to 2010.

What might be surprising though is where a lot of that chocolate was purchased — natural food stores.

However, that doesn’t mean supermarkets have lost their luster — they are still the main channel for chocolates sales, followed by convenience stores.

Regardless of where consumers are buying it though, the point is they’re buying it — a lot.

Packaged Facts says that while the country still is dealing with the aftermath of the recession, chocolate can be counted on to outpace overall food market growth.

In 2011, everyday chocolate, seasonal candies and premium chocolate all posted dollar gains, but that’s due partially to price increases implemented to offset rises in raw material and other costs.

The sector’s growth is affected, in part, to increasingly widespread foodie culture and consumers’ desire to indulge in an “affordable luxury”— but it’s also because there’s just more places to buy chocolate. Packaged Facts says there’s more chocolate retailers, both because of franchise expansion and successful independent shops looking to expand their footprints.