High Notes: Our Tour Through the Salon

The first thing that struck me as I moved around the Paris Salon was the international diversity of attendees at each venue.  It drove home to me what a worldwide pleasure chocolate has become.  As I watched sizeable groups of Japanese, Chinese and other Asian visitors move through crowds, I remembered a two-month tour through Southeast Asia not too many years ago when I would have given anything for a chocolate bar.  I don’t think that would be true today.

I stopped by several Asian chocolatiers to sample their wares and was especially impressed by a sublime white chocolate and green tea combination.  Until that moment, I would have sworn I didn’t care for white chocolate.  Later I learned it had been carefully formulated for its health properties by the award-winning Japanese chocolatier Hironobu Tsujiguchi.

Meanwhile, Daniel, my husband, was on a more directed search for nougat, one of his personal favorites.  That led him to Philippe Dura, whose family business in the south of France makes nougat of every description — hard, soft, white or dark — with almost any kind of nut or fruit imaginable and many that are not.  White chocolate with truffle.  Olives and olive oil.  Even French lavender finds its way into his well-crafted confections. 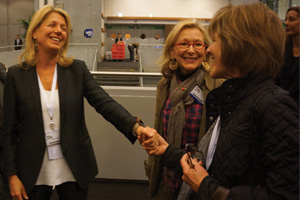 But by then I was sampling goods from Orangettes & Co, including, of course, the chocolate-covered orange peel crafted by owner Guy Peralt.  It was meltingly tender with a delightfully heightened flavor.  But my favorite were his tender crystalized mint leaves covered with dark chocolate, which were sublime.  We purchased a bag for a dinner party we were to attend that night.  They were the perfect endnote and a big hit with our hosts.

Later we stopped by the booth of Stephane Bonnat from Voiron because we hoped to sample his single origin bar made with porcelana beans from Peru.  We had been introduced to him at the Lima Salon del Chocolate in July, so sampling a bar made in France from white beans we had tasted freshly picked in Peru just months earlier was a particularly meaningful moment for us.

In a nearby booth, we met François Pralus who also grew up in the world of chocolate.  Today he owns a cocoa plantation in Madagascar and roasts chocolate beans to create bean-to-bar chocolate at his factory in Roanne.  He gave us a complete tasting of single origin-bars, identified by the varietal —forestero, criollo or trinitario — which provided a particularly interesting point of reference.

Next we stopped to talk to Benoít Nihant, a Belgian chocolatier whose bars contain only cocoa, sugar and cocoa butter.  They were remarkable for their deep rich taste.  We sampled a selection of his single estate bars, a concept that goes one step beyond bean-to-bar. 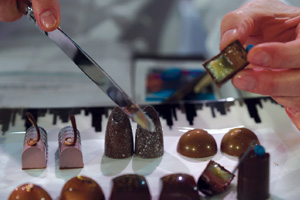 One of Nihant’s samples was flavored with tonka – a spice native to South America — which was a standout for me.  As was yuzu, an Asian sour mandarin, which I tasted in several offerings during the day.  Another flavor that was notable was Andean Golden Berry in a bar by Picari, the award-winning Ecuadorian company owned by Francisco Peralta.  Olive oil and chocolate was a combination new to both of us, but we found them potentially compatible.  And maybe it just came at the right moment in a long day, but a glass of non-alcoholic chocolate sangria filled with fresh fruit and mint hit the spot in a way I would not have anticipated.

We continued our way through the crowded halls overflowing with delicious offerings.  It was a dizzying choice.  What else can one do when Pierre Herme is just down the aisle from Michel Cluizel, who is just around the corner from Jean Paul Hevin?  We made slow progress, often stopping to meet the people behind the iconic names. In such a setting, there’s no telling who you might run into. Like maybe Maricel Presilla, the American chef and chocolate enthusiast whose most recent cookbook just won the James Beard Award? What a day!