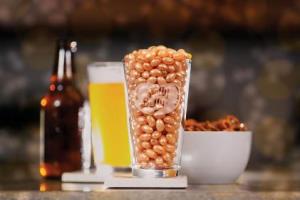 Now you can have your beer and eat it too! That’s right; the Jelly Belly Candy Co.’s new Draft Beer Jelly Belly is finally a real thing!

The golden jelly bean with an iridescent finish has been a consumer request for years, and Jelly Belly is happy to serve them up a mug at a time.

The renowned candy makers are by no means newcomers to replicating alcoholic beverages. The first, Mai Tai jelly bean, was concocted in 1977. Since then, a slew of gourmet flavors including Pina Colada (1983), Margarita (1995), and Mojito (2010) have turned into fan favorites.

Despite a substantial demand for a draft beer jelly bean dating back decades, this is Jelly Belly’s first taste of beer. In an effort to pay homage to the company’s German ancestry, they went with a Hefeweizen ale-inspired flavor.

"This took about three years to perfect," says Ambrose Lee, research and development manager for Jelly Belly Candy Co. "The recipe includes top secret ingredients, but I can tell you it contains no alcohol."

The perfect-pick-me-up for holidays like upcoming St. Patrick’s Day, Draft Beer offers a unique opportunity to overindulge on the taste of wheat with a flavor punch and pinch of sweet, while avoiding a subsequent hangover.

Even better, Jelly Belly is well aware of the trendy tendency among craft beer connoisseurs to create “beer cocktail” flavors. By taking Draft Beer and combining it with other Jelly Belly flavors, consumers can get as creative as their taste buds desire.

"Anyone who enjoys a good, cold beer will enjoy Draft Beer Jelly Belly beans for the simple fact that it tastes just as you'd imagine," says Rob Swaigen, v.p. of marketing for Jelly Belly Candy Co.

"I love the flavors in a good beer and Jelly Belly has managed to get that from brew to bean in an incredible way," says Jackie Dodd, beer expert, cookbook author, and the voice behind the popular cooking with craft beer blog The Beeroness . "Jelly Belly found a way to fit 15 pints in the palm of your hand, they deserve an award."

The authenticity of Draft Beer doesn’t stop with its taste, explains Jeff Brown, v.p. in charge of manufacturing for Jelly Belly. In fact it’s so spot-on, it’s easy for its makers to forget they’re working in a candy factory.

"Usually the factory has a sweet and fruity aroma, but when we're making this flavor it's just like being in an ale house," he says.