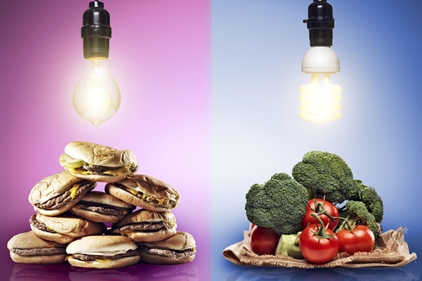 There were 30,000 online respondents in 60 countries who provided data for the survey, which finds that 49 percent considered themselves overweight. The survey estimates 621 million people (30 percent of the global population) were overweight or obese, with the majority (62 percent) of those located in developing markets.

The survey shows that respondents are taking up arms against obesity. Fifty percent are trying to lose weight, while 88 percent are willing to pay more for healthy food. Three quarters believe they “are what they eat,” and 80 percent use food to prevent health issues such as diabetes, high cholesterol and hypertension.

“There is a tremendous opportunity for food manufacturers and retailers to lead a healthy movement by providing the products and services that consumers want and need,” says Susan Dunn, executive v.p., global professional services, Nielsen. “While diet fads come and go overtime, innovative, back-to-basics foods that taste good, are easy to prepare and provide healthful benefits will have staying power. The first step is knowing where to put your product development efforts.”

The survey finds that willingness to pay more for food with healthy attributes varies between markets and age groups. On the whole, about a quarter of respondents are willing to pay a premium (27 percent) while 23 percent are slightly willing and 12 percent are not.

Developing markets like Latin America, Asia-Pacific and Africa/Middle East all register more than 90 percent of respondents willing to pay more for healthy food, compared to developed markets in Europe and North America, which saw 80 percent or less.

Non-GMO and organic foods were popular, with 33 percent willing to pay more for both.

The survey finds that age groups vary in willingness to pay a premium. The youngest generations are most willing to pay, while older age groups are less willing.

“While age often dictates a need for foods that contain certain health attributes, it is the youngest consumers who are most willing to back up their sentiments with their wallets,” says Dunn. “As Millennials’ purchasing power increases, manufacturers and retailers that make the effort to understand and connect with this generation’s needs increase their odds of success.”

Responses indicate that respondents are looking for foods with “back-to-basics” attributes. The most desired foods are fresh, natural and minimally processed, with 43 percent of respondents wanting all-natural ingredients and non-GMO foods. Those without artificial colors or flavors and foods made with fruits and vegetables also all scored over 40 percent.

Other important attributes consumers are looking for

The most common ways of losing weight are still popular: diet and exercise. Three quarters of respondents who want to lose weight plan to change their diets while 72 percent plan to exercise. Less popular methods include taking diet bars/pills/shakes (11 percent) and using medicine (7 percent).

Diet changes people said they planned to do, included:

Eating smaller portions and fewer processed foods — with more than 40 percent each — are the most popular weight loss methods in North America.

Three categories of food were defined in the survey: healthy, indulgent and semi-healthy.

Sales in the first two categories grew between 2012 and 2014, but the sales of the healthy category eclipsed that of the indulgent by three percent while the semi-healthy category fell by one percent.

“The growth of healthy options does not automatically come at the expense of indulgent offerings,” says Dunn. “There is room for both healthy foods and occasional treats in consumers’ diets. It is the semi-healthy options that are most impacted.”

Chips, chocolate and cookie sales all grew worldwide at six, four and one percent respectively.

Health claims on product packaging are most effective on foods consumers already perceive as healthy.

“When adding health and wellness claims to products, manufacturers must first understand how consumers perceive their products,” says Dunn. “If the product is perceived as healthy, any claims regarding the health benefits of a product are likely to resonate with consumers.”

But for semi-healthy and indulgence categories, manufacturers should choose claims addressing a particular product attribute, she says. For example, customers skeptical of heart-health claims for chips may be more receptive to claims about low sodium.

Foods with organic and natural claims grew 24 and 28 percent, respectively, in sales over the past two years, as did foods with claims of low or reduced sodium and added fruit (both seven percent).

Healthy, “good-for-you” foods face great potential for growth, with 40 percent of respondents planning to buy more fruit and vegetables in the next half year. Fish and seafood, yogurt, water, nuts and seeds, cereal, juices, and meat are all expected to grow as well.

However, indulgence categories are still set to do well. Most respondents expect to buy the same amount in nearly all categories, including indulgence. The biggest potential for growth in this category comes from the developing world, in particular Africa/Middle East, with nearly one-fifth planning to buy more candy, ice cream and salty snacks.