The powerful WAT-tage of ‘wonder wheat’ 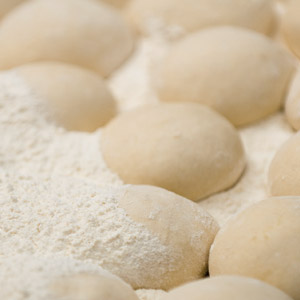 Hard winter wheat (HWW) is the predominant wheat of choice for bread production, but I’m finding that not all varieties create dough with optimum handling properties. From my internship with Flower’s Foods in a commercial bakery, I learned firsthand how important consistent flour quality is between lot changeovers, and that even flours that meet tight specifications don’t always perform the same way.

Since commercial production line equipment is designed to produce large volumes of product at a rapid production rate, there’s no time allowance for process modification. Often, the product simply cannot be salvaged once it moves outside of desired parameters for the processing line (it’s too weak or too strong, for example), which can result in lots of lost time and product.

Water absorption is one flour property that can affect dough machinability. Bread produced from excessively wet or dry dough is inferior in volume and texture to bread produced with optimum water absorption. Flour with a low water-absorption tolerance (WAT) easily becomes sticky and slack with minor deviation from the optimum water absorption (1% or 2%, flour basis), while high WAT flour can tolerate a wider water range and is capable of producing a machinable dough and good loaf volume. Bakers have remarked on this tactile observation over the years, but the cause is unknown.

WAT’s up with hard wheat?

Commercial bakeries set flour specifications to achieve optimum dough water absorption, instead of running mixing tests for each flour lot and identifying the optimum absorption. Robust flour with a high WAT would have great appeal for commercial bread applications because the flour would tolerate larger water-level variations without adverse effects on machining or end product quality.

To study the phenomenon more closely, my research group and I examined the water content in flour using a mixograph, a recording dough mixer that measures the resistance to mixing and provides a dough development profile for identifying the optimum dough water absorption, mixing time and dough strength.

Optimum water content is estimated based on flour protein content and determined by subjective evaluation of the curve shape.

We found that tests show increasing and decreasing the water-absorption level from the estimated optimum water absorption until excessively wet and dry conditions were observed in the mixogram curves defined the range of WAT. Substantial changes in the mixing curves occurred over a narrow water level interval for flours possessing a low WAT, while flours with high WAT showed minor changes in the mixing curve over a wider range of water-application levels.

No published research defines WAT, determines the factors affecting the phenomenon or relates the trend with bread quality in hard winter wheat varieties.

The forces behind this observation were purposed in thesis work conducted in 2011 by Gabriela Rattin and Dr. Becky Miller in the Kansas State University Wheat Quality Lab. Five hard red wheat varieties grown in six Kansas locations were tested and showed that gliadin (a class of proteins present in wheat and several other cereals within the grass genus Triticum) from the extractable polymeric protein fraction correlated with WAT.

For my thesis research, I continued to study this by examining the WAT behavior of Pacific Northwest hard winter wheat varieties grown in two Oregon locations. By comparing the results from two wheat sample sets with different genetic and environmental backgrounds, my research group and I hoped to find a broader, more conclusive understanding of the factors effecting WAT.

While we found remarkably high WAT ranges (up to 16%) for some of the wheat flour samples, we observed statistically significant genetic and environmental effects on WAT for only the Kansas flour sample set.

However, since several protein-related parameters were causally linked to WAT, the phenomenon may be possibly controlled by a protein factor.

As is often the case with research, more study is needed to understand the influential factor causing the WAT behavior before flours with high WAT can be made commercially available.

Elyse Buckley is a Master of Science candidate student in the grain science department at Kansas State University, Manhattan, Kan. She studied abroad last year and had an internship with Flowers Foods in 2009, spending time on a production line and in research and development. She will continue with her bakery studies and offer her observations and impressions of an education in baking.

Transforming a basic brownie into a value-added product

Learning the ropes in ingredient technology

Transitioning from school to work

The challenges of making whole-wheat/whole-grain goods

The challenges of making whole-wheat/whole-grain goods

The future of wheat explored at ABA convention