August 2014, Akron, Ohio — Designing and building a 1-million-sq.-ft. warehouse is a daunting task. For a leading distributor of industrial goods, the stakes were high to deliver flawless order fulfillment for customers throughout the United States and internationally — this distributor planned to create the largest goods-to-person automated system in the world!

The distributor’s newest automated storage and retrieval system (AS/RS) — which consists of a variety of computer-controlled systems that automatically place and retrieve items from defined storage locations — would be a critical part of the new facility’s success. This new system would have several hundred thousand individual tote storage locations, with more than 1 million storage compartments (achieved through tote subdivision).

The distributor knew proper tote selection was crucial to optimize the potential of the new automated system — its previous system used a variety of containers made from different materials. Consistency and utility of the totes were a necessity. The distributor was looking for a tote that could be divided into smaller compartments to better utilize the space in the system, as well as easily picked by a worker when the tote was delivered to the packing

station. The products needed to stay contained within individual compartments while the tote was shuttled throughout the system to keep items separated and prevent them from mixing.

The problem? There was no off-the-shelf tote solution that met the high performance and flexibility requirements the distributor desired for the new facility. But this problem soon had an answer, when Akro-Mils learned of the challenge and was tasked with developing a custom solution that would satisfy the distributor’s current and future needs. 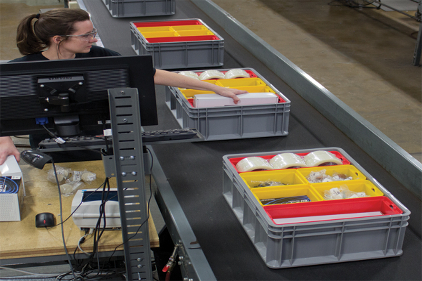 A team of Akro-Mils representatives met with the distributor to learn about the new facility, to see the needs of the project, and to explain Akro-Mils’ industry-leading design and production capabilities to create custom-engineered products.

Akro-Mils’ engineering team came up with several concepts within a matter of days, and presented the distributor with a variety of options — including a tote that would accept either removable dividers or partition cups that could easily clip into the tote. The cup would prevent rocking or spilling while the tote was in motion, but also allowed the entire cup to be pulled out of the tote and dumped or handled at the packing station. The divider would prevent part mixing through secure tote attachment by fitting into recesses in the bottom and sides of the tote.

And through the use of Akro-Mils’ 3-D printing technology, scaled-down versions of the options of the design concepts were presented to the distributor within days! This speed from the concept stage to the prototype stage helped Akro-Mils further discuss options and improvements with the customer to better refine the finished design.

While the tote design was being finalized, the engineering team brought in Akro-Mils’ manufacturing and sourcing experts to find the best raw materials that would meet the customer’s performance requirements in the system and optimize the cost. They also began discussions with injection mold producers to lay the groundwork for the injection molds that would need to be created for the new tote and accessories.

Once the details were finalized and the molds completed, Akro-Mils began production of several hundred thousand pieces of this new product — the Multi-Load Tote!

The Multi-Load Tote expands and improves upon traditional tote design by providing maximum flexibility as users’ storage needs change — it can be used as a stand-alone tote, or with optional, removable bin cups or dividers to create individual compartments within the tote.

Akro-Mils’ patent-pending sidewall clip design allows the cups and dividers to attach quickly and securely to the tote. Individual cups can be removed from the tote for easy handling at a picking or packing station.

Akro-Mils’ work with the distributor has been a success for both companies! The distributor says the Multi-Load Totes have given it the capability to adapt to an ever-changing number of SKUs, and the totes are working perfectly within its new AS/RS system.

The tote is working out so well that Akro-Mils is producing additional sets of the totes for further expansion of the facility, with another sizeable order in the near future to fill and complete the distributor’s system!

Akro-Mils, a Myers Industries, Inc. company (NYSE: MYE), is a leading manufacturer of plastic and metal storage, organization, transport and material handling products for use in industrial, medical/pharmacy, commercial and consumer markets. For more information or to request a catalog, contact Akro-Mils at 800-253-2467, fax 330-761-6348, or visit the company’s award-winning website at www.akro-mils.com.