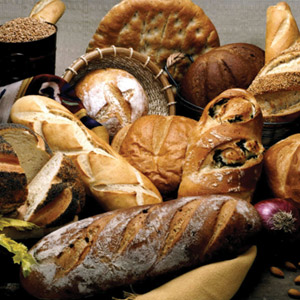 Proclaimed by Congress in 2002, National Bread Month means bread has been officially celebrated in the U.S. for a decade. But bread has served as the staff of life since biblical times and has nourished almost every culture throughout the world. Be it empanadas in South America, baguettes in France or pitas in the Middle East, bread is a healthful and inexpensive staple in most cultures.

Some folks may degrade and belittle bread and the wheat it comes from, but science is on bread’s side. Several recent studies prove that bread (and other grains), in recommended amounts, actually decreases waist circumference when two servings of enriched grains and three servings of whole grains are consumed daily1. This consumption pattern is almost identical to the U.S. Department of Agriculture’s MyPlate program.

A recent Canadian study shows that those who consume a higher percentage of carbohydrates daily (47-64% of calories) tend to have a lower Body Mass Index (BMI) than those consuming fewer carbohydrates2. A new study confirms that the higher the whole-grain intake (in the form of whole wheat), the lower the BMI in adults3.

Eliminating wheat products from the diet can decrease numerous important nutrients. An article published by the British Nutrition Foundation in September shows that even though bread consumption in the U.K. has dropped to two to three slices daily, it still furnishes about 20% of the fiber and calcium in the diet, as well as significant amounts of protein, B vitamins and other essential minerals4.

Another recent study shows that free-living, normal-weight U.S. adults consume diets higher in many macro- and micronutrients (vegetable protein, dietary fiber, carbohydrates, vitamins A and C, magnesium and iron) than those who are overweight or obese5. A study of 679 Celiac patients, meanwhile, looked at BMIs of new patients and followed them for about three years after going on a gluten-free diet. Their BMIs increased significantly on the gluten-free diet6. This may only be partially due to the often high-fat/high-sugar, gluten-free substitutes consumed while on gluten-free diets, but naturally their intestines would absorb more nutrients, including calories, as they heal.

Still, wheat flour consumption in the U.S. has dropped by 16 lb./capita, from a recent high of 147 lb. in 1997 to 131 lb. in 2011. Obesity, meanwhile, has skyrocketed during this time. So it’s difficult, if not ludicrous, to single out wheat as the primary contributor to the obesity problem.

And you may hear that the wheat today is “not your grandmother’s wheat.” Nutritionally, it is. It probably needs less herbicides and pesticides and can have a shorter stem, which makes it easier to harvest, but it contains the same genes that have been in the wheat gene pool since the beginning of wheat. No new genes have been introduced that make wheat less nutritious.

Celiac disease affects fewer than 1% of Americans, while approximately 6% are gluten-sensitive. An extremely low percentage of people are allergic to wheat, so the remaining 90% can celebrate National Bread Month with their favorite wheat bread.

Celebrate the sweet and tart at National Cherry Festival, July 5-12