The shows of shows 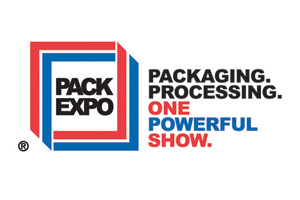 With the holidays upon us and the year about to end, many of us have the tired feet to prove that we conquered another PACK EXPO International in October, while some of us are still recuperating from the iba 2012 show in September. The packaging show in Chicago, at 1,120, 999 sq. ft., was even bigger than in the past, as it drew a record crowd. Attendance figures this year increased 3% over those of the 2010 show, despite Hurricane Sandy ravaging the East Coast.

Show organizer and trade association Packaging Machinery Manufacturers Institute (PMMI), Reston, Va., says that the four-day event, Oct. 28–31, covered more than 1.1 million net sq. ft. of McCormick Place with 1,965 exhibitors—a jump of more than 6% in terms of space and 8% in exhibiting companies from the 2010 show.

Pre-registration was also up significantly, at nearly 10%, going into the event, but the East Coast storm had somewhat of an effect on final attendance numbers. Still, PACK EXPO welcomed 45,300 attendees to the event. Some of the attendance bump can be credited to the growing number of international attendees, which was up 8% from 2010. But all of this is good news, as the show is a bit of a barometer for manufacturing in the year to come.

“While we fully expected to surpass our attendance goals, the storm’s effect on East Coast travel prohibited many from making the show,” notes Charles D. Yuska, president of PMMI. “However, we still finished with the largest PACK EXPO International since 2006. The increase in exhibitors speaks to the quality of business done at PACK EXPO. These exhibiting companies invest time and resources, and they have to believe that they are going to get a return on that investment.”

And judging by exhibitors’ comments, they got what they bargained for. Yuska says that the show was a great success, and there was quite a lot of processing equipment throughout the packaging-related exhibits. “PACK EXPO International 2012 maintained strong traffic, despite the storm, and the exhibitors I spoke with were very pleased with the number and quality of leads they received,” he says. “I think it’s also significant that exhibitors were already planning ahead and reserving booth space for PACK EXPO Las Vegas 2013.”

And speaking of successful shows, check out our highlights in this issue of iba 2012, the international trade fair for baking, held in Munich Sept. 16-21. A popular six-day show of its own, iba welcomed 1,250 exhibitors and about 70,000 visitors from 177 countries. The internationality of iba increased in importance with international visitors increasing by 12% over that of iba 2009.

The show also set a new benchmark, with the exhibitors providing a comprehensive market overview, which has been given top ratings by visitors from the industry. About 94.5% of show visitors agreed that iba’s range of products was one-of-a-kind and rated it “excellent” to “good.”

“Our expectations have been exceeded by far,” says Peter Becker, president of the German Bakers’ Confederation (Zentralverband des Deutschen Bäckerhandwerks). “On one hand, we have had more foreign visitors at iba. On the other hand, I am particularly pleased that so many German bakers attended the most significant tradeshow in their industry. Everyone has seized the opportunity, which only arises once every three years, to gain a comprehensive overview of the market. Nowhere else will you find such a wide choice of different companies.” This level of satisfaction with the tradeshow is reflected in the surveys carried out amongst visitors.”

Iba also “made an important contribution toward helping the bakers so that they can continue to delight customers in the future with quality and individuality,” Becker adds. There were fewer visitors at this year’s event than at the previous seven-day show, but iba’s high level of satisfaction showed that “all of the important decision makers were there,” he says. The atmosphere played a significant part in concluding successful business deals, he adds, and more participants were willing to invest, compared with previous years. That alone proves the event’s worth.

By the way, we are kicking off 2013 with an exciting new look, some new sections and a couple of changes to familiar sections, so be sure to get your copy of our January issue. It has a fresh, vibrant appeal that we hope you’ll like. So until then, Happy Holidays one and all!

A spring fling of shows, meetings and polls

Nuts and Seeds (Savory Snacks) Market in the United States of America - Outlook to 2023: Market Size, Growth and Forecast Analytics

Food Plant of the Future: Anticipating the Next Generation

Food Plant of the Future: Raising the Bar on Plant Air Quality