Way Better Snacks builds momentum as a leader in better-for-you snacking, featuring a range of sprouted ingredients in its clean-label tortilla chips and crackers.

In the world of snacks today, good ideas are sprouting up all over. Snacking is the new normal, and in order to remain competitive and relevant in a culture that increasingly leans toward better-for-you options, manufacturers are exploring formulation tactics that build more positive nutritional messaging into their products. Clean label is also top-of-mind, and if a snack can swing a gluten-free claim, its appeal instantly broadens.

But it’s the core ingredient lineup that commands the spotlight, with products gaining flavor and nutritional differentiation via selective use of sprouted seeds like flax, chia, quinoa, broccoli, kale and radish, as well as sprouted brown rice and black beans—all courtesy of the company’s wholly owned sprouting business unit, Live Better Sprouting Innovation. 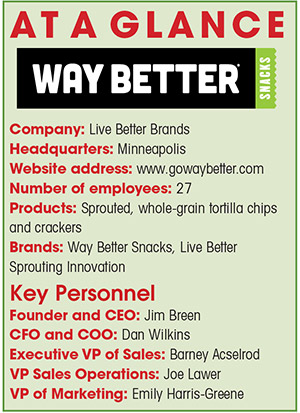 Jim Breen, founder and CEO, has a background in sales, previously working for Borden and the Unilever brand Best Foods before shifting into the natural-products industry for several years with the Celestial Seasonings brand at The Hain Celestial Group.

This latter experience set Breen on a clear path toward natural, better-for-you snacking, fortified with an acute understanding of natural-consumer dynamics. “I learned what natural consumers were like, what they were seeking, things they believe—and that the greater trend would be a move toward transparency and overall wellness,” he says. “It was a really inspiring journey for me, and I got excited to create a company of my own, with products that would be in-tune with what consumers were seeking.”

Vision became reality in 2011 with the launch of six flavors of tortilla chips under the Way Better Snacks brand, says Breen. “Since then, we’ve added three everyday new flavors and three limited-edition seasonal flavors, as well as a line of sprouted-barley crackers,” he adds.

For Breen, better snacks always start with better ingredients. “I had a vision to create better food—delicious snacks I could feel good about eating and feeding to my friends and family,” he says. “I knew that beginning with the highest-quality ingredients meant we’d end up with better snacks. Our grains, beans and seeds are expertly sourced for texture, color and—most importantly—way better flavor.”

Using sprouted grains, beans and seeds is central to this mission, and the growth of Way Better Snacks is a bellwether for the mainstreaming of sprouted ingredients. “Consumers are demanding better-for-you foods that don’t require a compromise on taste, convenience or freshness,” says Breen. “We’ve also seen much more mainstream desire for sprouted whole grains like the ones that we use in all of our snacks. Sprouting premium, ancient grains has helped consumers realize the taste and nutritional benefits of whole grains.”

Way Better Snacks produces 12 varieties of whole-grain corn tortilla chips and four flavors of sprouted-barley crackers, all made with sprouted grains, beans and seeds. Breen notes that the Sweet Potato tortilla chips are a top-seller, while the Spicy Sriracha chips have steadily and quickly gained momentum since their launch in 2014. The most-recent product launch, in January, was a Nacho Cheese whole-grain tortilla chip. All of the chips recently saw an update with a new contemporary packaging design that sports clear better-for-you messaging.

“We refreshed everything,” says Emily Harris-Greene, vice president, marketing, “including our communication and messaging to consumers.”

But the core message of Way Better Snacks has remained consistent from the beginning. While some snack producers have tackled reformulation projects to clean up their labels in the wake of mounting consumer demand, Way Better Snacks was natural from the start.

“Our customer is seeking real, quality, wholesome ingredients—ingredients they recognize, ingredients they can find in their own kitchen,” says Harris-Greene. “They care about real, high-quality food that’s fulfilling. They’re not calorie-counters or completely cutting out fat. We know that consumers not only want their food to be free from the negatives—like artificial ingredients, trans fats and GMOs)—but also, they want their snacks to be crafted with delicious, quality, better-for-you ingredients.”

One factor, non-GMO certification, was a must from the start—something that wasn’t as commonplace as it is today, notes Breen. “I was really focused on some of the consumer attributes that were increasing in importance.”

The sprouted ingredients that go into every bag of Way Better Snacks come from Live Better Sprouting Innovation, formerly known as BioEssential Botanicals Inc. and the original supplier of sprouted ingredients for the products. The company has been in the business of sprouting ingredients for more than 20 years. Live Better Brands purchased the business, based in Stirling, Ontario, in May 2014. “They are one of the true experts in the world of sprouting,” says Breen.

“We start by taking great care of our source ingredients, really high-quality inputs, and put them to a series of tight protocols that have been developed over time,” says Breen. “Our sprouting protocols include using just the right temperature and air quality—conditions that are perfect for growing. The facility is pristine.” The process has yielded a germination rate of more than 98 percent. “We developed a process that has allowed us to get a very uniform sprouted product in a short amount of time,” he says.

This tight control over sprouting conditions can yield ingredients with superior nutritional content. “A number of the ingredients have high omega-3 counts, so I was focused on making sure that our products could deliver above-average levels of omega-3s,” says Breen. He also notes that they were the first company to commercially sprout and bring to market sprouted flax seed.

Beyond its dedication to Way Better Snacks, Live Better Sprouting Innovation supplies sprouted ingredients to the industry at large. “We get inquiries every week from literally all major CPGs,” says Breen, “categories from beverage to pet food to baking. It’s really a huge benefit to see what’s going on in the marketplace and what these companies are interested in possibly bringing to market. There is absolutely zero doubt that sprouting is ascending in popularity.”

Way Better Snacks has national distribution across grocery, mass merchandise, specialty grocery and natural channels, but has a strong concentration in grocery and natural retailers—particularly in the Midwest and on the East Coast. Retailers carrying the products include Whole Foods Market, Sprouts Farmers Market and Fresh Thyme Farmers Market. A recent push for expanded distribution has been catalyzed by a strategic investment in Live Better Brands by private-equity firm Alliance Consumer Growth in June 2015.

The market for better-for-you tortilla chips and crackers continues to grow more mainstream, and more retailers are now familiar with sprouted ingredients. Retailers continue to bring in more products that feature forward-trending ingredients like chia, flax and quinoa. So adding new levels of distribution has grown easier for Way Better Snacks of late.

The Way Better Snacks story has centered on honesty and simplicity from the start. “We’ve been up for just over four years now,” says Breen. “The product started strong from an ingredient-quality standpoint, and it is in an even stronger place today than it was at the beginning. We feel good about what we’re doing.”