This website requires certain cookies to work and uses other cookies to help you have the best experience. By visiting this website, certain cookies have already been set, which you may delete and block. By closing this message or continuing to use our site, you agree to the use of cookies. Visit our updated privacy and cookie policy to learn more.
Home » A history of excellence at Anita's Mexican Foods
Cover StorySnack ProductsBakery ProductsPuffs/Extruded SnacksTortilla ChipsTortillasTortilla Trends

A history of excellence at Anita's Mexican Foods

Anita’s Mexican Foods has grown significantly through the years, most recently expanding into better-for-you snacks.

Today’s market for better-for-you extruded snacks is skyrocketing, with products like veggie straws and other puffed/expanded products finding appeal among shoppers seeking alternatives to traditional offerings.

Anita’s Mexican Foods is a primary manufacturer of these snacks for dozens of branded and private label lines across the U.S.—a celebration of successful business diversification that company founder Mauro Robles couldn’t have predicted nearly 60 years ago when he founded his small tortilla-making business in East Los Angeles.

“Mauro Robles’ story is a testament to hard work, a keen business sense without the benefit of a college education and the pursuit of the American dream,” says Mauro Gomez, vice president, sales and marketing, Anita’s Mexican Foods Corp., San Bernardino, CA. “He left his home state of Zacatecas in 1952 to work at American railroad yards under the Bracero Program.” The program brought many Mexican workers north to help fill labor gaps in the U.S. workforce.

Mauro Robles earned his U.S. citizenship—and set down roots in his new country. He met his future wife, Estela, in a small market owned by Estela’s father.

“Armed with big ambitions and $5,000 in savings, Mauro Robles opened a small tortilla-making business on May 4, 1958 in East Los Angeles,” says Gomez. He dubbed the business La Reina, Spanish for “The Queen.” His primary customers were mom-and-pop restaurants. The business grew, and in 1961 he moved to a new plant, still in East Los Angeles.

“We’ve always known our dad is the hardest worker we’ve ever met,” says Ricardo Robles, president. He was in the office, in the factory, working long days, every day. In the days before tortilla automation hit its stride, he brought ideas to equipment manufacturers to create the machines he needed to get the job done.

Anita’s Mexican Foods was owned by the Marquez family since the 1930s, and at the time of purchase, they were mutual customers with La Reina. “They were multigenerational also, just like us,” says Ricardo. “We were purchasing corn tortillas from them. They were buying flour tortillas from us. It was a nice relationship.”

Hard work and smart business sense has paid off through the years. Snack Food & Wholesale Bakery magazine named Anita’s Mexican Foods its “Tortilla Manufacturer of the Year” in 2006, bringing the company to the attention of the U.S. snack and bakery market at large.

Years later, the Robles family was named First Runner Up for the “National Small Business Person of the Year Award” in 2014. Leading up to that award, the company saw over 100 percent year-over-year growth and the addition of over 100 employees. That strong pattern of growth continues.

Over time, Anita’s Mexican Foods found opportunity in selling to frozen-food and other processors who needed tortillas for their products, like frozen burritos. “We supply a lot of processors,” says Gomez. “That’s where found our niche in the tortilla business.”

Much of its work in co-manufacturing, private label and foodservice centers on the ability of Anita’s Mexican Foods to create original products for its customer base. “We make custom recipes for people,” notes Ricardo.

This “behind-the-scenes” approach has worked well for Anita’s Mexican Foods. “The company made a conscious decision over 20 years ago to not compete with our partners, but to focus on our core competencies of quality and innovation,” says Gomez. “Thus, we focus strictly on co-manufacturing, private label and foodservice business.”

Anita’s Mexican Foods was a pioneer of organic tortilla chip production starting in the 1980s—a movement that has since spread across the U.S. and around the world.

“That was a very important change in terms of our direction,” says Ricardo. “Little did we know when we started making that organic tortilla chips that it would turn out to be as big as it became—not only for ourselves, but in terms of a whole industry that’s looking at organic snack products.”

The company has customers for its tortillas and other products across the U.S. and internationally, including in Asia, Australia and New Zealand. “They use our products not just for burritos, but also pizzas and other types of products,” says Gomez.

Gomez also notes that they’ve seen an increased demand for transparency across the supply chain.

Anita’s Mexican Foods had a carved a nice niche with its tortilla business, but expansion further afield beckoned. “More than 20 years ago, after a national competitor began taking a bite of the Robles’ market, Anita’s became pioneers in an untapped niche for healthier, gluten-free, corn-based products, which now accounts for a considerable chunk of its revenues,” says Gomez. This includes its expanded pellet snack business. “As early as 1987, the company introduced organic blue, white and yellow corns and began using suppliers of only GMO-free corn,” he says.

Anita’s sales outgrew its original facility and the business purchased a new 145,000-square-foot site a few years ago.

The extruded offerings from Anita’s Mexican Foods have gained significant ground over the years. Today, the company produces a range of pellet snacks made from multigrain blends, potato, corn and vegetables. Its capabilities for shapes include squares, straws, sticks, ripples and twists. It can make snacks for the organic, gluten-free, non-GMO, kosher and natural market.

Products like veggie straws and chips have driven incremental sales across the snack category. “The ingredient make-up has changed as we get more vegetable powders built into the mix,” says Ricardo.

The company works very closely with its extruded pellet supplier to fine-tune its offerings. “We’re pushing the envelope on getting more ingredients into the pellets,” says Ricardo. He cites use of ancient grains, fruits like blueberry and natural colors.

Jacqueline notes that the company is also looking to add internal extrusion capabilities to further expand its snack business. 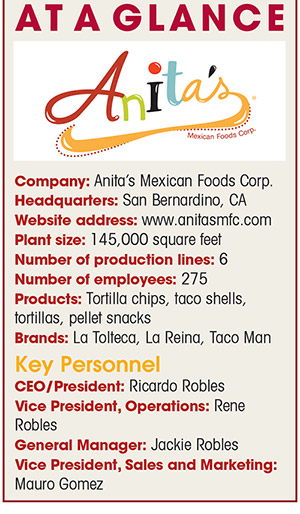 Anita’s Mexican Foods operates six lines in its facility. “We have one line dedicated to producing pellet snacks, three tortilla chip lines and two taco shell lines,” says Gomez. “Our chip lines are used to produce a wide array of snacks. Although the primary focus is on cooked corn and masa-based chips, we are sheeting products that don’t use corn.” All masa for its corn-based products is cooked on-site.

“Most recently, we purchased a new tortilla chip line,” says Gomez. The line was purchased to boost capacity, but was also designed to be more energy-efficient.

When the company expanded into its new facility, it invested in a range of new equipment. “The primary goal was to for efficient output,” says Rene Robles, vice president, operations. “We know we had a limited space. We went for maximum output on very high-speed lines.”

Gomez notes that Anita’s Mexican Foods is currently working on updating its seasoning system for its snacks to use more flavored oils.

The facility is SQF Level 2, and the company is currently working toward Level 3 certification.

In order to stay in step with snack-product trends, the company has made investments in packaging. “We recently launched what we refer to as an ‘in-line side-gusset’ bag,” says Gomez. “This packaging has given our customer the opportunity to offer a ‘home-style’ bag with an extended shelf life. With previous packaging, it was not hermetically sealed, and thus the shelf life was much shorter and a challenge on distribution.” The company has also invested in packaging technology for flat-bottomed, gusseted bags.

Gomez notes that more requests have come in for smaller bag sizes, so that required addition of bagging equipment that can handle a variety of flexible packaging formats.

Further packaging automation to accommodate case packing and palletizing might be on the horizon, notes Rene.

Mauro Robles built a culture of hard work and ingenuity into Anita’s Mexican Foods and the La Reina Family of Brands—a culture that continues to thrive today.

Inside the pathway to the Famous Amos cookie relaunch

2022 Snack Producer of the Year: Kellogg Co. and Cheez-It crackers

Inside the history of innovation at Rich Products Corp.

The path of continuous improvement at Hearthside Food Solutions