Robert Garcia, president and CEO, RW Garcia Co. Inc., San Jose, CA, is a man who understands every detail of his tortilla chip and cracker business. While his extensive industry background is primarily in sales, through the years, he’s grown familiar with “welding and screwdrivers,” as he puts it, and doesn’t hesitate to step into the production fray, wrench in hand, to troubleshoot a glitch on the line. Then, once the line is operational again, he walks to the end, selects a finished blue tortilla chip and samples it with a knowing smile. After all, it’s his name above the door—and on every pack of RW Garcia tortilla chips and crackers that hits retail in the U.S., Canada, Europe, Asia and Australia. He’s in the minute details and the big decisions. And he wouldn’t have it any other way.

‘Better-for-you’ from the beginning

Back in 1982, Garcia was working for a national tortilla chip company and saw an opportunity to set up a regional distribution system—and eventually opened his own plant. “We went from distributing someone else’s product with our label on it—in other words, private label—to, at one point, deciding that if we were ever going to control our destiny, we would have to start manufacturing a product on our own,” he says.

Garcia’s initial vision has served him well through the years. “He recognized the trend toward healthier, higher-quality and minimally processed foods,” says Genelle Chetcuti, director of marketing—and Garcia’s stepdaughter. Her mother, Margaret Garcia, is vice president of sales and marketing, and her two brothers work in sales.

While many might have considered better-for-you tortilla chips an anomaly back in the early 1980s, today they’re approaching mainstream. “We intentionally started out making a better-for-you product some 30 years ago,” says Garcia. Now subtly healthier products find widespread appeal. RW Garcia strives to deliver tortilla chips and crackers that have lower fat and sodium contents compared to similar products. It also means using oils with a better nutritional profile for frying. Organic and non-GMO ingredients are also key formulation rubrics.

But Garcia is quick to note that, in the end, the products simply must taste good. He points out that there’s a fine line between better-for-you product criteria and best possible flavor and eating quality, “and we walk it every single day.”

“Clean” food is a primary industry trend today, notes Chetcuti, with more people analyzing packages—keeping tabs on the negatives, like fat and sodium, but also looking for positives, like nutritional seed and vegetable content. “Over the last five or six years, we’ve been working on interesting inclusions in the tortilla chips to make a unique and different type of snack,” she says. This has led to using vegetables like kale and sweet potatoes in the substrate, along with chia, flax and sesame seeds. “We try to use a lot of different ingredients that are actually baked into the chip.

“The consumer trend toward healthier snacking has contributed to the growth of the RW Garcia brand year-over-year for the past five years, and because of this, each of our sales categories has shown double-digit growth.”

Stringent quality control is built into RW Garcia’s supply chain. The company was the first British Retail Consortium–certified snack manufacturer in the U.S., some 15 years ago. “If somebody wants to sell product to us, they have to meet that standard,” says Garcia. “All of our suppliers are certified, vetted and audited—either by ourselves personally or a third party.”

The company was also the first corn snack company to gain Non-GMO Project verification. The move to non-GMO was partially instigated by a desire to meet EU product standards. Garcia notes that about 10 percent of the company’s product is exported overseas.

Distribution in Canada goes through retailers like Costco and Whole Foods. Chetcuti notes that the 3 Seed Sweet Potato Crackers are a big seller through Costco in Canada. The seeds within the cracker matrix are chia, flax and black sesame. As in all of its products, the primary base is corn.

As is the case in any plant that runs organic and conventional products, RW Garcia ensures against cross-contamination with, for instance, certified-organic products running early in the week, then conventional, and then any products that include ingredients considered allergens, such as sesame seeds. “Then, when necessary, you stop and do a complete clean-down, and you start again,” says Garcia. “A lot of organizational skills have to come into play.”

Sustainability also factors into the RW Garcia plan of action, and the company reuses and recycles whenever possible, says Chetcuti. “The company recycles any corn not processed in the chip-making process to cattle farmers for feed. And the company removes virtually all corn starch left after the manufacturing process and sends it to biofuel converters.”

A pattern of growth

Although RW Garcia currently has two plants in operation—in Lincolnton, NC, and Las Vegas—the new Las Vegas plant is its fifth. The first was in Milpitas, CA, and was 17,000 square feet. “I thought, at the time, that was the largest I would ever consider,” says Garcia. “Plant No. 2 was a 35,000-square-foot effort, which I was absolutely convinced would be the last one that I would ever have to build.”

But demand for the company’s products increased, particularly along the East Coast and in Europe. “So I built a plant in Tampa, FL. That was about a 30,000-square-foot plant, which quickly became outpaced,” says Garcia.

In 2004, he built the plant in North Carolina, which started out at about 60,000 square feet. But again, the need for growth arose. “We added another 40,000 feet to it a couple of years ago,” Garcia continues. He then built the Las Vegas plant, which—as he is fond of saying—“might be the last plant that I build.”

The new Las Vegas facility currently runs one fully automated line, but two additional lines are planned. “The Las Vegas facility is outfitted with the newest equipment from leading manufacturers of chip and cracker making and packaging equipment,” says Chetcuti. “The state-of-the-art facility incorporates unique software customized to eliminate equipment variability and to produce products with constant repeatability to the highest quality of standards.” (For a video overview of this brand-new line in action, go to www.snackandbakery.com/video.)

Garcia notes that both plants can run the same products. Geographically, they’re ideally suited to serve eastern and western North American distribution networks—and will serve distinct international customers. He notes that the Las Vegas plant will ship to South Korea and Australia, while the North Carolina plant will serve the company’s European customers. “If we were to do another plant, it would be in Europe,” he says, “possibly Spain.” He also would potentially consider a plant in Australia.

“In five years, our goal is to be twice as big as we are right now,” says Garcia. “We’re aiming for 100 percent growth in RW Garcia brand placement and sales, with continued extension into Asia and Europe.”

While RW Garcia has nationwide distribution, the U.S. coasts tend to perform particularly well. “All of our geographical areas are important, but we see the biggest branded product sales on the West and East Coasts of the United States,” says Chetcuti.

Chetcuti notes that the company’s best-selling products “bring something unique to the family-friendly snacking table. RW Garcia’s Veggie Dippers, for example, have a trio of seeds and different veggies baked into the chips before they are fried, ultimately giving the chips a unique color and delicious flavor.”

RW Garcia has seen great success with its MixtBag tortilla chips, which combine different chip styles into one bag: Yellow & Blue, Red & Yellow and Sweet & Spicy Salsa. The new Veggie MixtBag, launched in March 2015, brings together three different types of vegetable-enhanced tortilla chips. All are made with stone-ground corn, but feature other accents: Spinach & Garlic (green); Red Beet & Onion (red); and Carrot, Tomato & Sesame (orange). “This is just one of the avenues that we’ve taken to be a little bit creative and new,” says Garcia.

RW Garcia also manufacturers 3 Seed Dippers, available in several varieties, cut into rectangular tortilla strips that are flavorful enough to eat on their own, but sturdy enough to hold up to dips like guacamole. “They don’t crack when you’re dipping them,” says Chetcuti. The Dippers have seen good levels of success in Europe, Australia and the U.S., she notes, sold in traditional grocery, specialty grocery and warehouse/club stores.

RW Garcia also manufactures a line of gluten-free crackers, which saw a limited launch in January 2015. They’re based on corn, with added ingredient dynamics seen in the veggie tortilla chips: Sweet Potato, Kale and 3 Seed Harvest crackers, with the latter including pumpkin in the mix. Nationwide distribution of these products will begin in May.

“When gluten-free started to become part of our conversations, we decided that we could make a cracker that was gluten-free, and it wouldn’t be too far out of the realm of our production,” says Garcia. “The growth has been phenomenal.”

Garcia doesn’t see the better-for-you snack market tapering off. In fact, today’s food culture is just catching up with the ideals he put into place more than 30 years ago, when he started this company. “We were fortunate to head in this direction from the beginning,” he says. 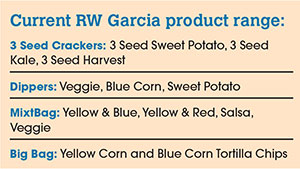 Douglas J. Peckenpaugh is Group Editorial Director, Snack, Bakery, Meat, Candy & Latin America, FBP Group, BNP Media. He has over two decades of publishing experience following the food industry from farm to fork, covering agriculture, ingredient processing, CPG and foodservice R&D, retail and restaurant menu trends, and retail grocery branding. He is a member of the Research Chefs Association and serves on the Board of Directors for the International Foodservice Editorial Council. Doug studied Professional and Creative Writing at Purdue University.