A refusal to compromise continually drives Michel Saillant, president, Boulart Inc., Lachine, Quebec, to new levels of success. From the point of founding the bakery in 2007 with one private label customer to today with distribution across all of Canada and the U.S., his vision has remained intact. “We chose to start big, which is relatively rare for a startup,” says Saillant. “From the start, we decided not to compromise on the space or machinery we sought, nor on the purity and quality of the breads that we wanted to produce in great quantity. This meant that from the get-go, we were built to handle high-volume retail customers looking to make a quality, authentic product accessible. This is what makes us a success.”

This uncompromising nature extends to the markets Boulart serves. “Our mission is to bring authentic artisan bread to the mainstream market, so people don’t have to settle for less,” says Saillant.

Saillant previously operated a juice bar in Malibu, CA, and worked in the fashion industry, and inherited a strong, entrepreneurial spirit from his father. His fashion industry work called for regular travel to Europe, and it was there that he fell in love with true European artisan bread.

“It was by circumstance that I met a baker in Montreal who was a true artisan baker,” says Saillant. The bakery wanted to expand distribution into the U.S. and hired him as a business consultant. “I worked on the floor for a couple of months in order to learn every step of what made this product so great. I was with them for about two and half years, and that’s how I built my vision of Boulart.”

Saillant proposed his “industrial artisan” vision to the bakery, but it thought it was too risky, so he parted ways with the company on amicable terms. “That same night, I had dinner with my best friend, and I told him that I left the bakery, and he said, ‘OK, what are you going to do?’ I said, ‘I don’t know.’ He said, ‘You have been telling me how passionate you are about bread for the last two years.’ Now he saw the vision and said, ‘Why don’t you do it for yourself?’ I said, ‘You know what, you are right, because if I am so good at telling everybody else what to do, let’s see if I can do it myself.’”

And so Boulart was born from a passion for truly great artisan bread, but with a vision to bring it to the masses at an affordable price.

The range of breads Boulart bakes includes French classics like baguettes and more-specialized products like Belgian loaf, Parisian baguette and fougasse. But Boulart is best known for its ciabatta.

A relatively new product is its ciabatta artisan burger bun. “The burger buns are an important product for us, because we really want to introduce artisanal quality to the quick-service restaurant industry,” says Saillant. “This bun has the power to hold up to any meaty, saucy and delicious burger creation.” In addition to better burgers, the ciabatta buns are ideal carriers for artisan breakfast sandwiches.

The most-recent product in the Boulart lineup is ciabatta bites, small rolls Saillant suggests pair well with a light meal, such as a soup or a salad, or simply can be enjoyed as a snack, perhaps with hummus, for example.

The best-selling product at Boulart is its ciabatta baguette. “We were the first to introduce it to the North American market,” says Saillant. “Eight years ago, ciabatta was only found in Europe, and never in baguette form. Not only did we pinpoint an opportunity in the marketplace to produce quality, artisan bread at high velocity, we took innovation one step further by launching a unique product that combined French and Italian traditions: the ciabatta baguette.”

Almost all Boulart products available are non-GMO-verified, and the bakery has recently added the possibility for organic, as well. All products are preservative-free and have no added sugar, resulting in a supremely clean label. All Boulart breads are also completely baked, then flash-frozen.

Distribution channels include both retail and foodservice. Boulart also still supplies breads for retailers’ private label lines. The bakery provides category management, planogram analysis and brand support for its customers. “We offer a lot of support to our retail partners with in-store marketing materials to help promote and sell the products,” says Saillant.

Saillant describes the Boulart philosophy as “less is more,” with a refusal to compromise. “Whatever we do, we do it completely,” he says. “Shortcuts are forbidden. We are highly focused on both business and product development. It’s never been about conforming to industry standards. It’s about setting new ones.”

Boulart has developed a process that yields craft-bakery artisan breads on automated lines with strong throughput. The bakery is certified SQF Level 2.

The high-velocity lines at the Boulart bakery have many unique characteristics. “We customized our production lines to recreate the artisan process and to be able to respect the longer fermentation times,” says Saillant. “Our three production lines are custom-made and fully automated. We are currently setting up a fourth line, as we have just received our organic certification, and part of the factory will be dedicated to certified-organic production.”

Depending on the product, fermentation times can be over four hours, all in a highly temperature-controlled environment. High hydration levels help ensure that the breads maintain peak freshness over their shelf life—up to 270 days frozen.

One of Boulart’s biggest challenges in its early days of production was its flour. “The protein content is very low in Europe, so you are able to have a dough that is very extensible, very elastic,” says Saillant. “In North America, the higher protein makes it very tough. It’s hard to make Italian dough or a traditional baguette with a tough dough.” By fine-tuning the flour milling, mixing process and dough handling, Boulart has been able to create dough that handles just like European dough, but is made with North American flour. “I can stretch my dough until I can see through it without it breaking,” he says.

Boulart’s breads are baked to exacting weight, size and color specifications. The ability to meet these criteria without a loss in quality or compromising high throughput levels helps control costs.

“When I started the company, I knew my competitors would watch me,” says Saillant. “Now everybody makes ciabatta, so I need a way to be one step ahead of them. From the beginning, I knew that if we could reach specifications, better control our process, with less rejected products, we could go after large foodservice chains that need tight specifications.”

Saillant’s dedication to streamlined simplicity extends to its packaging. It has only one box size for distribution, optimized to fit perfectly on pallets and maximize space on the trucks. The packaging for its core bread lineup has not changed through the years. He notes that as the trend toward smaller portions and snacking has increased, Boulart has added more small bread types, which required new packaging designs. All end-of-line packaging and palletizing operations are automated.

Saillant notes that with continued expansion of the business, constructing a second bakery is likely.

One of Boulart’s greatest strategic advantages, notes Saillant, is the ability to say no. “At Boulart, saying no is a good thing,” he says. “As soon as my business was launched, people tried to influence me, whether to start more modestly or even to start with a product that consumers may be more familiar with, like the French baguette. I said no. What did I say when I was pushed to embark on the gluten-free trend or to create 1,001 niche products? No. When I was invited to limit myself to the production capabilities we had and first tackle the local market? No. So, when takeover bids for the company came, I also said no because I firmly believe that a game-changer must also be free. I have never made any compromise on the quality of the Boulart operations, products and services. This is what private ownership allows me to do. Freedom is important to me.” 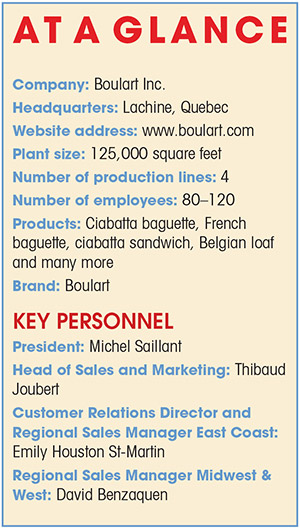 Douglas J. Peckenpaugh is Group Editorial Director, Snack, Bakery, Meat, Candy & Latin America, FBP Group, BNP Media. He has over two decades of publishing experience following the food industry from farm to fork, covering agriculture, ingredient processing, CPG and foodservice R&D, retail and restaurant menu trends, and retail grocery branding. He is a member of the Research Chefs Association and serves on the Board of Directors for the International Foodservice Editorial Council. Doug studied Professional and Creative Writing at Purdue University.

The candy and confectionery industry continues to refine the various approaches that can lead to increased sustainability across the board. In this webinar Brad Kintzer, Chief Chocolate Maker, TCHO, will outline how his company has driven sustainability changes through initiatives to improve overall product quality.