Dietary sodium: The good, the bad, the ugly 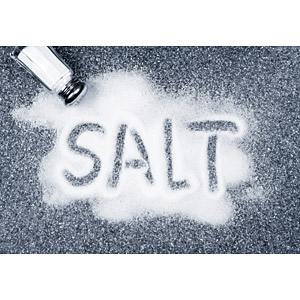 February—American Heart Month—reminded us that heart disease remains one of the most fatal conditions plaguing Americans. In fact, according to the Centers for Disease Control and Prevention, one in four American deaths is caused by cardiovascular disease.

Research tells us there are many factors that contribute to a healthy heart. Of course, there are some factors that are out of our control, like genetics and family history. But even for those people at high risk, there are many behavioral and dietary choices they can make to reduce the risk of—and even prevent—heart disease. So what gives?

Conflicting messaging and lack of consumer education are two of the biggest culprits when it comes to heart disease prevention awareness, particularly when it comes to diet. This is especially true for sodium intake. Sodium is a mineral that plays an important role in the human body. It helps regulate fluid balance and cellular activity, and control blood pressure.

Table salt (sodium chloride) is the most common source of sodium for Americans. It turns out that salt is also an excellent tool in food production. Food manufacturers and home cooks alike use salt to enhance flavor, improve shelf life and assist with baking. For these reasons, salt is prevalent in today’s food supply, leading most Americans to consume too much.

Studies have clearly defined the link between high levels of dietary sodium intake and negative health outcomes as it relates to heart disease. According to the National Center for Chronic Disease Prevention and Health Promotion’s Division for Heart Disease and Stroke Prevention, excess dietary sodium raises the risk for high blood pressure and its cardiovascular health consequences, including heart disease and stroke. But how much sodium is too much or too little? The answer depends on who you ask.

It’s estimated that most Americans consume up 3,400 milligrams of sodium per day. The 2010 Dietary Guidelines for Americans recommends healthy adults aim for no more than 2,300 milligrams per day. The American Heart Association released new guidelines last year recommending Americans aim for 1,500 milligrams of sodium per day. Noticing the discrepancy between recommendations, the Institute of Medicine released its own report examining sodium intake and health outcomes, and found studies do not support reduction in sodium intake to below 2,300 milligrams per day for the average healthy adult.

With mixed messages coming from credible organizations, it’s hard to imagine that the media, health professionals and educators also are not sending mixed messages to consumers. In recent months, salt has been villainized in media, and the majority of the blame has fallen on the food industry for producing foods with high sodium levels. The most recent report from the 2015 Dietary Guidelines Advisory Committee upholds the 2010 DGA report and recommends people consume no more than 2,300 milligrams of sodium per day. The newly released report calls on the food industry to continue reformulating its offerings to improve their nutritional profiles. So, what has the grains industry done to help alleviate sodium overconsumption?

For those unfamiliar with the baking process, salt is critical to bread production. It enhances flavor, crust color and crumb structure, strengthening and tightening the gluten in dough. Sodium prevents excess yeast action (fermentation control) and inhibits acid-producing bacteria. Despite this, the industry has made great strides in reducing the amount salt or sodium chloride used in the baking process. In fact, industry benchmarking data indicates a 6 percent reduction in sodium in bread over the past 18 months.

As the old saying goes, you can lead a horse to water, but you can’t make it drink. Ultimately, consumers choose their food. The Grain Foods Foundation places a high value on consumer education, and I would like to encourage all invested parties—private or not—to do the same. We need to stop the finger-pointing and help consumers navigate the murky waters to reach thorough awareness and education. Industry groups should get involved in federal programs and nonprofit organizations to help educate them on how the food industry is making an impact on helping Americans lead a heart healthy lifestyle.

The heart of better health

The power of protein