Before heading into spring, I often reflect on the progress I’ve made both professionally and personally since the new year. I’m proud to say that this winter, the Grain Foods Foundation (GFF) made strides helping the American Heart Association (AHA) spread awareness about heart health and disease prevention. Coming out of American Heart Month in February, coupled with my attendance at the Go Red for Women Luncheon in New York City last month, I can you tell you that heart disease is more prevalent than ever, yet even more preventable through lifestyle and dietary interventions. This discrepancy led me to think about a very real issue facing consumers and the food industry today: Sodium consumption and the reduction of sodium in the food supply.

Salt can preserve foods and help extend their shelf life. It also acts as a facilitator for chemical reactions when cooking and baking. While salt is a seemingly helpful ingredient, there’s a danger in high sodium consumption, namely its connection with a condition called hypertension. High sodium intake can drive hypertension, defined by chronic high blood pressure and is a known risk factor for cardiovascular disease.

Conversely, a low-sodium diet is widely recognized by the medical community as a preventive measure and one of many treatments for heart disease. But without quantifying what “low” means, how low should we go? 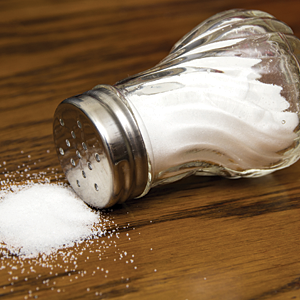 When comparing the industry’s recommended sodium consumption levels with Americans’ actual sodium intake, it is clear more education is needed. For example, the Institute of Medicine’s (IOM) tolerable upper intake level for sodium is less than 2,300 mg. per day (about one teaspoon of salt). This is echoed by the 2010 Dietary Guidelines for Americans, and organizations like the AHA believe the recommendation should be even more stringent, at 1,500 mg. a day (or just more than a half-teaspoon). On average, however, Americans are consuming about 3,000 to 4,000 mg. a day (about two teaspoons).

To reduce this confusion, the Centers for Disease Control and Prevention (CDC) called upon the IOM to re-evaluate its sodium recommendation. In a report published in May 2013, the IOM concluded there’s a lack of evidence to change its current recommendation and that most Americans are consuming much more sodium than they should. Because of this, there is a general call to action for healthy Americans to reduce their sodium intake overall and for the food industry to reduce sodium levels in its products to aid in this process.

To help raise awareness of the health risks associated with consuming excessive amounts of sodium via salt, the AHA released its “Salty Six” campaign in November. The six cautionary items include sandwiches; bread and rolls; pizza; cold cuts and cured meats; soup; and poultry. The list is meant to help consumers easily identify foods, while food shopping and dining out, that could be pushing their sodium consumption over the edge. Unfortunately, many of these foods are hard for Americans to avoid, which begs the question: What can the food industry do to lower our sodium intake?

The bread industry has already been proactive in reducing sodium; the U.S. Department of Agriculture confirms that average sodium content in bread has dropped from 254 to 180 mg. per slice since 1963. But as anyone who has ever tried to bake something can attest, any deviation from an exact recipe can yield undesirable results. Baking is truly an artform, and salt plays a key role in the bread-making process. In addition to enhancing flavor, salt helps dough rise by regulating yeast activity and build structure and appropriate texture as well as improves shelf life. Bakers must walk a fine line between reducing salt in their products and maintaining the quality of their products.

By replacing the sodium in the leavening agent with potassium, we might be able to help reduce symptoms in people with high blood pressure and heart disease.

Sodium-reduction efforts must incorporate industry and individual responsibility. Let’s work together to continue to improve our products, while educating consumers to make the best choices for leading a healthy lifestyle.

Dietary sodium: The good, the bad, the ugly

The heart of better health