Frito-Lay announces 2015 ‘Do Us A Flavor’ contest winner

Lay’s―one of the marquee brands from PepsiCo’s Frito-Lay division―has announced Lay’s Southern Biscuits and Gravy flavored potato chips as the winner of the 2015 “Do Us A Flavor” contest. Hailey Green of Noblesville, IN, who submitted the idea for the flavor, will take home a $1 million grand prize, or 1 percent of her winning flavor’s net sales through July 15, 2016 (whichever is higher). Lay’s Southern Biscuits and Gravy flavored chips also will remain on store shelves following the completion of the contest. 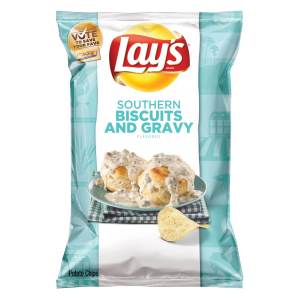 “As we bring this year's competition to a close, one thing is certain: America is a country full of amazing flavors," says Jeff Klein, vice president of marketing, Frito-Lay North America. "We congratulate Hailey on her victory, and all of the fans who will continue to enjoy this winning flavor on store shelves."

The three 2015 runner-up finalists―Angie Fu of Irvine, CA, who submitted West Coast Truffle Fries; Jeff Solensky of DuBois, PA, who submitted New York Reuben; and James Wagner of Wichita Falls, TX, who submitted Greektown Gyro―each will receive $50,000 in prize money. The Lay's brand also announced it will look for opportunities to bring one or more of the three runner-up flavors back to store shelves for limited-time appearances following the completion of the contest. Consumers are invited to visit www.facebook.com/lays for the latest details.

In July 2012, the Lay's brand launched its first "Do Us A Flavor" contest in the U.S., which resulted in Lay's Cheesy Garlic Bread, submitted by Karen Weber-Mendham of Land O'Lakes, WI, being selected as the first million-dollar winner. The contest returned to the U.S. for a second time in January 2014, with Lay's Kettle Cooked Wasabi Ginger, submitted by Meneko Spigner McBeth of Deptford, NJ, crowned the winner. This year consumers were invited to vote for their favorite finalist flavor from July 27 through Oct. 18 on www.DoUsAFlavor.com; via Twitter and Instagram; and/or via text message.