Colombia readies to serve the world

Country’s efforts to overcome its past plod forward

Maybe it’s because the mountains sprawl out like gems along the horizon; or because the vast amount of fresh fruit in the country tricked me into believing I was 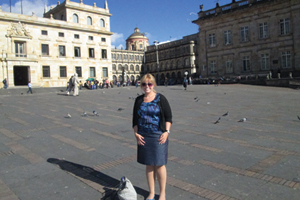 actually in the original Garden of Eden; or perhaps it was the churros and chocolate dipping sauce so deliciously authentic you had to roll your R when you referenced them — but somewhere along the way I fell in love with Colombia.

I recently took a week-long trip to the country funded by Proexport, the Colombian government agency that focuses on tourism, investment and of course, exports (see cover story). While there, I spent three days in Bogota, the capital, as well as two days in Cali, the salsa dancing capital of the world.

The goal of the trip was to get a first-hand look at what the new Free Trade Agreement between Colombia and the United States could mean for both countries. With all the sugar and confections down there, it was an obvious fit for our publication.

I won’t lie though, my first reaction to the potential visit was, “Isn’t that where all our drugs come from?”

My friends and family were not shy about their concerns for my safety and I told everyone that if I was kidnapped they should not, under any circumstances, use my passport photo for the news reports about the “American journalist captured by the drug cartel,” in a tone that was half joke, half dead serious.

Of course, it didn’t help matters that when I landed, a Colombian native who had sat in my row on the plane, said, “This is your first time in Colombia? You’re going to love it! But don’t trust anyone. I know my people. Don’t even trust me.”

But, as soon as I checked into my hotel room, I realized that Colombia, or at least Bogota, wasn’t so bad. And after just 24 hours of touring the city, eating the food and chatting with locals, I was wondering what I had been so scared about in the first place.

Mid-week, I posted a comment on Facebook about my new crush on the country: “Colombia’s new tourism slogan is ‘The only risk is wanting to stay. I get that. Could totally live here.”

But one of my relatives responded with a comment about the country’s most infamous export. And that’s when I knew it was love, because I was offended on behalf of Colombia at his remark.

In fact, the country has made great efforts to improve its image, and more importantly its reality over the last ten years. And everyone you meet tells you how much safer things are there compared to 10 years ago.

As one woman explained it to me, it’s now possible to travel rural roads between the major cities without the fear of getting kidnapped.

No country is truly perfect, and, of course, even Colombia never will be. But, its very resilience is what makes the country such a potential force in the international economy. The passion to move forward is in itself an admirable quality worthy of a second look.

In fact, while I was there, one of the other reporters in our group told me she was originally from a country in Central America that had experienced the same issues related to violent drug cartels. As she toured with us, she remarked on how she wished her own country was making as much effort to change as Colombia was. She noted all the efforts of Proexport as well as farmers and manufacturers who were working to create products that were organic and that met various certifications, such as Free Trade.

As long as local manufacturers and farmers keep plodding forward, taking the hard steps needed to serve the world, there’s no doubt they’ll be the next economy to watch.