Nature Valley Protein Bars show what a new product can be 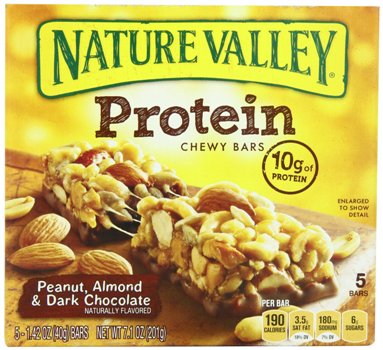 My uncle Felix was a sausage maker. He passed away several years ago, but I’ll never forget seeing him making blood sausage in our kitchen in the early 1970s. I was just a teenager back then — hard to believe, I know — but it was a scene that I’ll never forget.

First, to make blood sausage, or kiszka as we Poles call it, you need blood. Lots of it, or so it seemed. Then there's the barley, ground up pork bits and natural casing. And a meat grinder, of course. Seeing this process actually turned me against eating blood sausage for quite some time.

As I matured in both culinary tastes and wisdom, at least to some extent, I discovered that there’s really not THAT much blood used in the process.

So where am I going with this, you ask? Blood candies? No, just leading into the whole idea of seeing sausage made — sometimes it’s not a pretty process. Nonetheless, the resulting tasty treats are worth the effort.

Hence, when I came across a report from Nielsen regarding their Breakthrough Innovation Winners and “’how-the-sausage-gets-made’ back stories,” I was intrigued so say the least. But first, some interesting stats.

According to Nielsen,more than 85 percent of new CPGproducts fail in the marketplace. The company recently recognized new products that have enjoyed success in their first two years on the market. Out of 3,463 product launches in 2012, only  14 “Breakthrough Innovation Winners” met Nielsen’s three stringent criteria: distinctiveness (not mere refinements to existing brands in terms of ingredient reformulations, repackaging or size changes), relevance (earning at least $50 million in their first year) and endurance (achieving at least 90 percent of year one sales in year two).

Given our category focus, I decided to dig deeper into the Nielsen report regarding the evolution and success of General Mills’ Nature Valley Protein Bars. Listen, any new product launch that does $100 million in its first year deserves some scrutiny.

But as the case history reveals, the folks at General Mills had a much broader new product development goal than say coming up with an offshoot of their breakfast or snack bar.

“One of the interesting aspects of the protein bar is that we didn’t set out with a protein bar in mind,” Nature Valley Global Insight Manager, Heidi Keefe explains in the Nielsen report. “We were interested in understanding how the trend of ‘better-for-you snacking’ was manifest in consumers’ behaviors.”

Marketing Manager, Doug Martin adds, “What we were learning through our research revealed a real opportunity at the retail level. Specifically, while consumer comments about protein had broadened both in terms of who was interested in protein as well as the benefits they were seeking, protein bars were generally narrowly targeted — such as for muscle building or to Atkins dieters.”

“Furthermore,” Martin continues, “we found that while many consumers appreciated the benefits of the existing protein bars, they didn’t love the often chalky taste and texture. These insights really crystallized our innovation spec: deliver protein bar benefits with better taste and value.”

The report goes on to detail how the R&D folks, upon recognizing the opportunity, set about cutting six months off their normal launch timeline, which I gather can average around 12 or more months. And, as can be expected, in a company as large as General Mills, there are plenty of gatekeepers in such a process.

So, it took some executive muscle to fast-track the process.

As Keefe says in the report, “When you’re doing something this radical, you need finance, R&D, manufacturing, packaging, sales — a lot of folks who aren’t necessarily part of the innovation function to come together as a team.

This was probably the key to everything.”Let’s add another key: The product tastes good. I believe everyone loves snacking. Many, however, are still resistant toward better-for-you snacking unless they discover better-for-you delivers the same good taste as, well, their regular choice of snacks.”

From my perspective, there’s no better way to grow the category.