Great grains in the Hispanic world 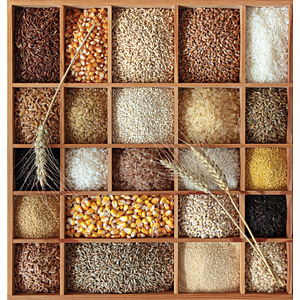 When Columbus first sailed to America, its inhabitants had already developed more than 200 types of maize.

The Inca Empire in South America was the largest empire in the Americas. Quinoa, which is native to the Andes, was an important part of the Incan diet. Corn, another staple of the Incas’ diet, traveled southward from Mexico.

The Mayan civilization prevailed on Mexico’s Yucatan Peninsula. For the Mayans, corn was not only a main source food source, it was also symbolic.

For the Aztecs, who lived where Mexico City is today, corn meant food. The amaranth plant was also important in Aztec religious rituals and cuisine.

In Colonial times, native cuisines began to change as the Spanish introduced foods to and exchanged cooking practices with Native Americans. Grains introduced by Spaniards included wheat, rice and barley, spurring the popularity of breads, pasta and rice-and-beans dishes.

Today, grains are the most important staple throughout Latin America, with one or two standing out as the primary staple in each region: Corn in Mexico; rice in Central America and the Caribbean; and wheat and rice in South America.

As far as the health of Hispanics in the U.S. is concerned, some dietary studies document their limited consumption of several key nutrients. However, the greatest nutritional problem facing Hispanics is excessive calorie consumption combined with low physical activity.

Despite the high consumption of “refined grains” in the U.S., which many correlate with the excessive calorie intake of Hispanics living in the U.S., Americans—including Hispanics—still have a number of nutrient deficiencies. Many of these nutrients are found in enriched and whole grains.

According to Food Navigator, today’s food trends include products high in protein and ancient grains. These grains offer health benefits that are as important to the Hispanic population as to any other population. They help prevent cancer, heart disease and high blood pressure. When eaten as whole grains, most of these grains are rich in fiber, which can aid in weight loss.

Two ancient grains that have been part of the cuisine of Latin countries for many years, but were left aside after the colonization of the countries, are amaranth and quinoa. New food trends make these grains more available at grocery stores, so they can be reincorporated into the Hispanic diet.

Amaranth is grown in Mexico and other Central American countries and offers near-complete protein content. Amaranth isn’t as low in the amino acid lysine as corn, but it is much richer in iron, magnesium and calcium than most grains. The tiny grain can help prevent anemia and osteoporosis. It’s an excellent source of fiber (mostly insoluble), which helps reduce the risk of such diseases as heart disease, certain cancers and digestive-tract conditions. It’s also a naturally gluten-free grain.

Quinoa, a grain-like crop, is grown primarily for its edible seeds. Quinoa was the Incas’ gold because they believed it increased their warriors’ stamina. It has significant amounts of both lysine and isoleucine, the latter of which is another essential amino acid, which allows the protein in quinoa to serve as a complete protein source. In addition, quinoa’s antioxidant and anti-inflammatory phytonutrients make it a likely candidate for cancer-risk reduction in humans. It’s also a naturally gluten-free grain.

Sylvia Klinger, MS, RD, LDN, a food and culinary consultant and founder of Hispanic Food Communications in Hinsdale, Ill., was assisted this month by Livia Ly, a dietetic student at the University of Illinois, Chicago.

Latinos and the American palate

A look at Hispanic foods

The rise of intact grains in baked goods

Continually anew in the snack and bakery world