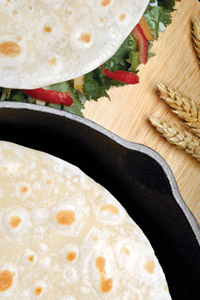 Well, the change of season brings with it many meetings, seminars, expos and other baking and snack activities that rain down like leaves. One recent notable gathering was the Tortilla Industry Association’s (TIA) 23rd annual convention, which manufacturers, producers, suppliers, consumers and others involved in the tortilla and flatbread industries attended Sept. 10-11 at Caesars Palace in Las Vegas. TIA, Arlington, Va., says the convention featured more than 80 exhibitors, showcasing new equipment, materials, ingredients, packaging and services as well as conference speakers who discussed pertinent topics such as what’s happening in the gluten-free tortilla market and what’s new in masa flour.

Chavez-Hansen began her career at 19, working for a local grain company, and soon became more involved with business matters, saving money to purchase her first corn tortilla production line. From that purchase, she developed a small company that produced corn and flour tortillas called La Tapatia Tortilleria, which grew and allowed her to become the sole owner of La Tapatia in the late 1980s.

Suarez and his son produced their first tortillas in 1971 at a tiny tortilla factory in Herndon, Va. From these humble beginnings, they developed a company in Manassas Park with a 36,000-sq.-ft. production facility and more than 60 employees. Today, 41 years later, Abuelita distributes flour tortillas and various prepared foods, now processing approximately 25,000 lb. of whole kernel corn and 12,000 lb. of corn flour each day.

Sponsored two-day conference sessions were highlighted by conference keynoter Judith Canales, MA., M.P.A., the U.S. Deputy Undersecretary of Agriculture (USDA), rural development, who discussed her role as an administrator in rural development and operations management. Among other topics, Canales described the seven key mission areas on which the USDA focuses, including farm programs and food safety, and discussed how businesses can develop further in rural areas (and not so rural) with help from industry loans and programs available to manufacturers. Funding is available to support business growth, create jobs and generate economic development in rural areas, she says, adding that the largest component of these loan programs is in manufacturing and in food manufacturing in particular. Canales also helped cut the ribbon to the exhibit hall on an exciting and fast-paced opening day.

Other speakers talked about formulating gluten-free tortillas, pricing products for maximum profit, reducing costs by taking advantage of utility company programs and the effect of high-absorption mixing methods on dough. Other sessions focused on new tortilla and bakery products made with masa flour and the process involved in certifying products as organic and kosher.

On another note—last month’s column about bagels, or the lack thereof, brought a wave of email to my inbox. Many of our readers agree that there are fewer fresh-bagel shops but tell us that bagels (and bialys, for that matter) fit into many diet plans and can be made to be lower in fat or fat-free. One reader even suggested that to lower the carbs, just cut the bagel in half. We really appreciate hearing from you, so keep those responses comin’!